Bridge Carbon Emissions and Driving Factors Based on a Life-Cycle Assessment Case Study: Cable-Stayed Bridge over Hun He River in Liaoning, China
Previous Article in Journal

Air Pollution and COVID-19: The Role of Particulate Matter in the Spread and Increase of COVID-19’s Morbidity and Mortality
Previous Article in Special Issue

Proposal of Sustainability Indicators for the Design of Small-Span Bridges

:
The application of techniques to analyze sustainability in the life cycle of small-span bridge superstructures is presented in this work. The objective was to obtain environmental and economic indicators for integration into the decision-making process to minimize the environmental impact, reduce resource consumption and minimize life cycle costs. Twenty-seven configurations of small-span bridges (6 to 20 m) of the following types were analyzed: steel–concrete composite bridges, cast in situ reinforced concrete bridges, precast bridges and prestressed concrete bridges, comprising a total of 405 structures. Environmental impacts and costs were quantified via life cycle environmental assessment and life cycle cost analysis following the boundaries of systems from the extraction of materials to the end of bridge life (“from cradle to grave”). In general, the results indicated that the environmental performance of the bridges was significantly linked to the material selection and bridge configuration. In addition, the study enabled the identification of the products and processes with the greatest impact in order to subsidize the design of more sustainable structures and government policies.
Keywords:
bridges; sustainability; design; life cycle assessment

The study’s main objective was to apply sustainability assessment techniques to the life cycle of small-span bridge superstructures, followed by the proposal of environmental and economic indicators to be integrated in the decision-making process. To achieve this objective, 405 bridges were analyzed according to different categories of damage and sustainability scenarios.
The analysis conducted configured the object of the study with the purpose of finding answers that would make it possible to contribute to the mitigation of the environmental impact, the reduction of resource consumption and the minimization of costs in the life cycle of bridges. The obtained results indicate that, in terms of scenarios presenting a score higher than 50% regarding the economic parameter, the precast concrete bridge with five beams exhibited the best performance. On the other hand, scenarios with a score higher than 50% regarding the environmental parameter pointed to the composite bridge with two welded steel beams as the bridge with the best global performance.
Using the methodological structure of the LCA, the results of the study can contribute to the development of indicators to be applied in small-span bridge designs, assuming that considering the sustainability of bridge designs could ameliorate impacts on the environment. These impacts are currently seen as the response to damage verified in the ecological, economic and social spheres; the aim of sustainable design is a construction method that analyzes the adoption of existing protocols and the possibilities of a design based on the concept of sustainability.
It can be concluded that the evaluation of the sustainability of structures depends on many variables that can influence decision-making, such as the criteria considered, the weights and the decision-making methods with the various attributes used.
The results indicate that the environmental performance of bridges is highly correlated with the type of bridge material, taking into account the fact that different types of materials or bridges exhibit different levels of environmental performance, indicating the importance of authorities reformulating intervention policies in the decision-making process.
The study of alternatives that can be applied in bridge designs is an important contribution to the civil construction sector and thus also to the satisfaction, by the State, of the requirements presented by the population for the use of small-span bridges; thus, the results found in the research confirm that the use of sustainability indicators in the methodological basis of LCA in bridge design can have a positive impact on sustainable development.
In the authors’ opinion, although a very important step towards the consideration of sustainability in bridge design can be made with the adoption of the indicators presented in this study, additional considerations should be included in future investigations, including, the eventual influence of social impacts on the obtained results according to different scenarios.

This paper represents a result of teamwork. C.J.M., V.Y. and M.K. jointly designed the research. C.J.M. developed the methodology, carried out the investigation and drafted the original manuscript, and M.K. and V.Y. revised and improved the manuscript. All authors have read and agreed to the published version of the manuscript.

This research was funded by the Brazilian government in the form of CAPES and CNPq grants, as well as the Spanish Ministry of Economy and Competitiveness, along with FEDER funding (Project: BIA2017-85098-R). 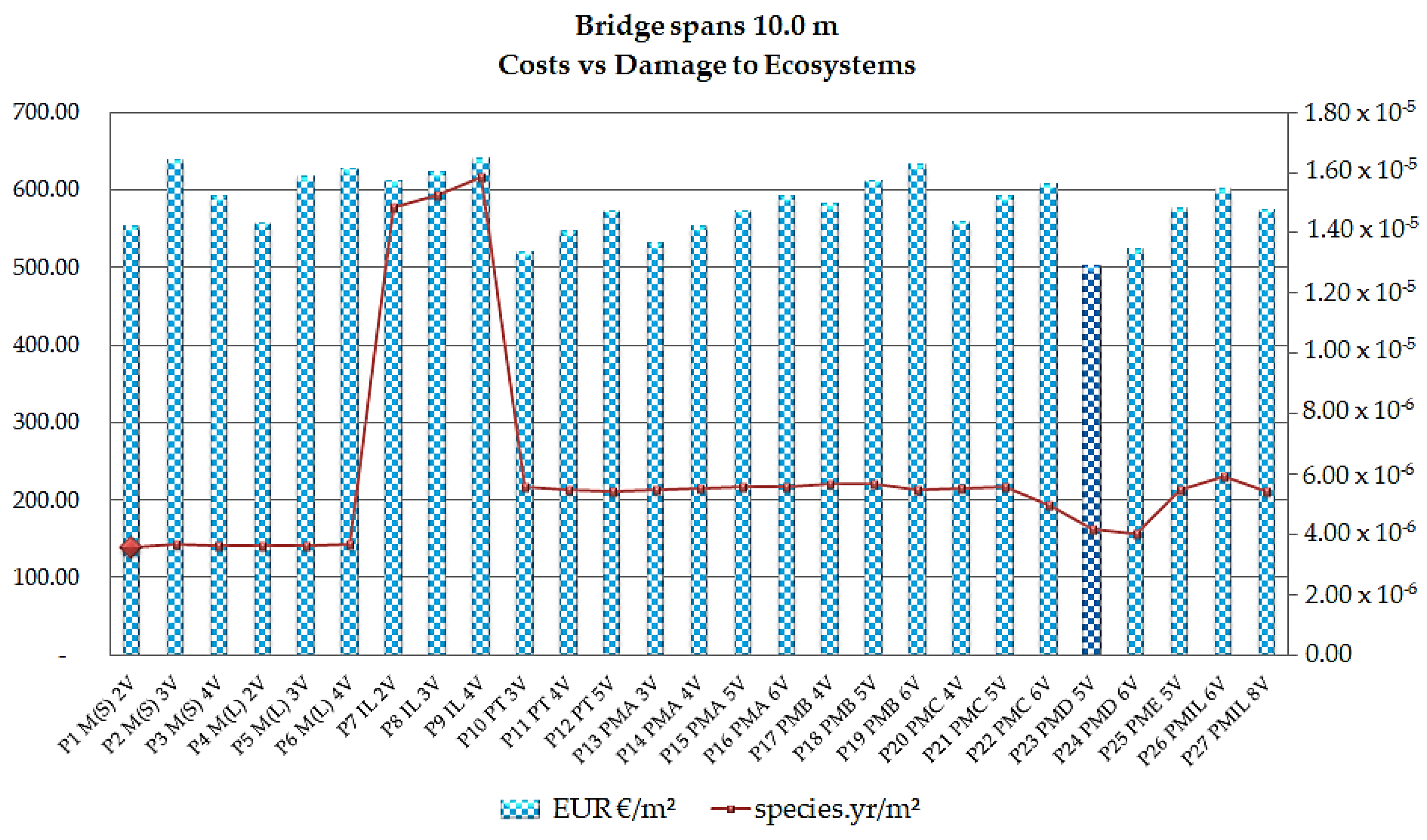 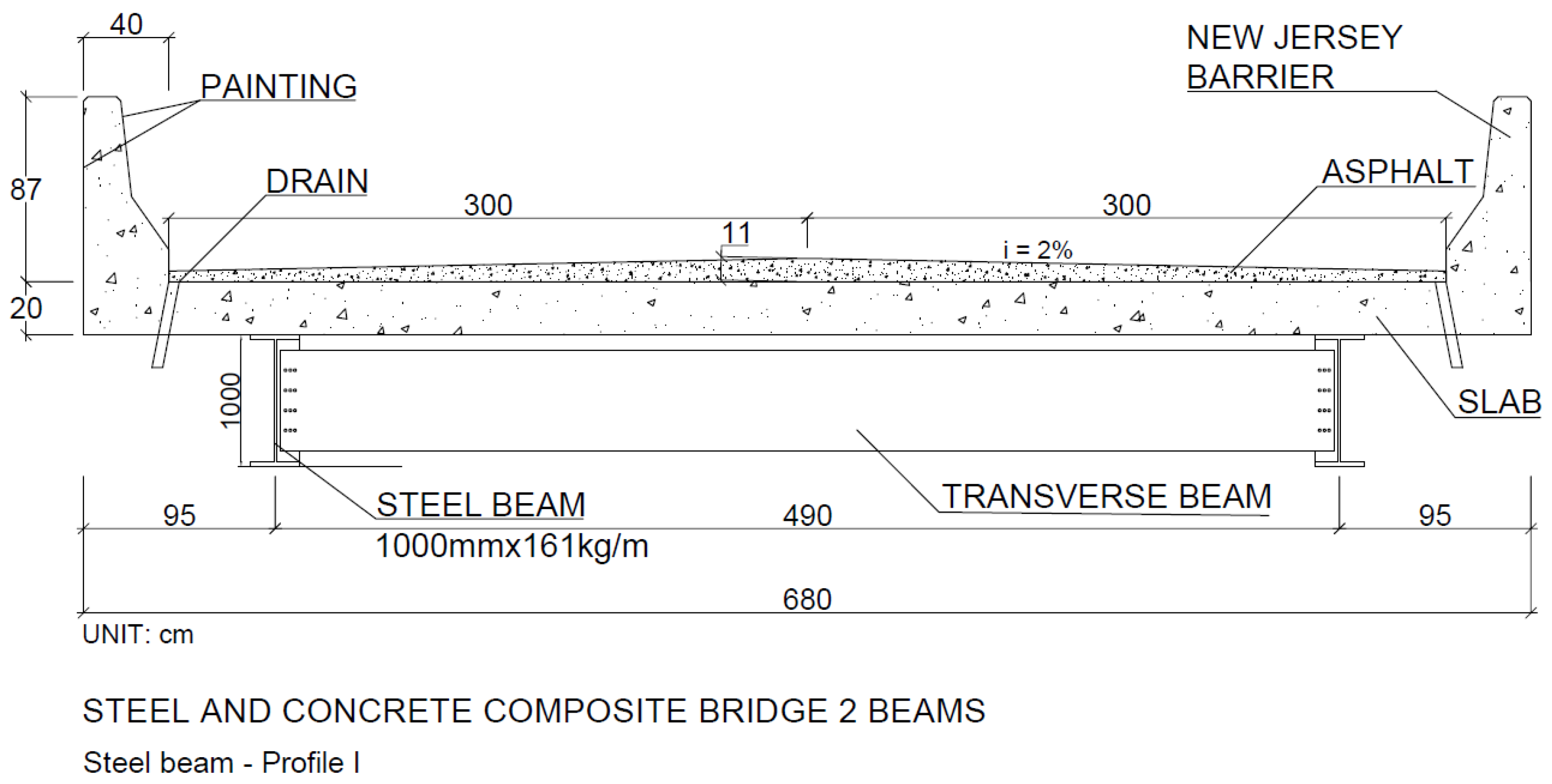