Differences in Rehabilitation Needs after Stroke: A Similarity Analysis on the ICF Core Set for Stroke
Previous Article in Journal

Mining causes serious destruction of the surface morphology and soil structure of lands, and vegetation restoration on post-mining lands provides an effective way for soil and water conservation. To determine the influence of mining and vegetation restoration on soil properties in the eastern margin of the Qinghai-Tibet Plateau, four land sites, including two vegetation restoration sites (restorated by Elymus nutans and Picea crassifolia, respectively), one non-vegetated mining site and one native grassland site, were selected. Fifty-two topsoil (0–10) samples were collected from these four sites, and then soil properties, trace metals and soil enzyme activities were analyzed. The results showed that there was an increase in soil pH (>8.0) after mining, while vegetation restoration decreased the soil pH compared with native grassland; the soil organic matter and total nitrogen in the site restored with E. nutans increased by 48.8% and 25.17%, respectively, compared with the site restored with P. crassifolia. The soil enzyme activities decreased after mining, and there were no significant increases in urease, phosphatase, β-glucosidase and β-1,4-N-acetylglucosaminidase activities after five years of restoration. In addition, the contents of soil trace metals (cadmium, chromium, mercury, lead and zinc) after mining were lower than the Chinese threshold (GB 15618/2018), but the content of arsenic in non-vegetated soil and P. crassifolia-restored soil exceeded the threshold by 22.61 times and 22.86 times, respectively. Therefore, As-contaminated land areas should be accurately determined and treated in a timely way to prevent arsenic from spreading, and plant species with tolerance to alkaline soil should be selected for vegetation restoration on post-mining lands. View Full-Text
Keywords: Qinghai-Tibet plateau; mine restoration; soil nutrients; soil enzyme activity; trace metals Qinghai-Tibet plateau; mine restoration; soil nutrients; soil enzyme activity; trace metals
►▼ Show Figures 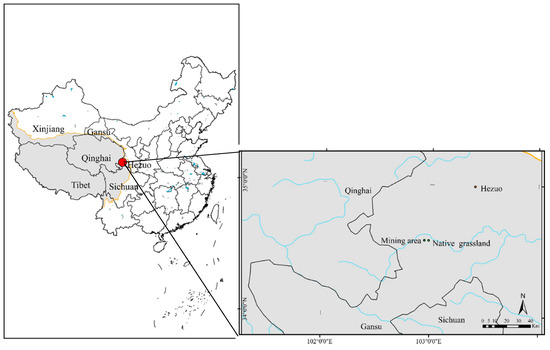