Transcriptomic Response of Breast Cancer Cells MDA-MB-231 to Docosahexaenoic Acid: Downregulation of Lipid and Cholesterol Metabolism Genes and Upregulation of Genes of the Pro-Apoptotic ER-Stress Pathway

Osteoporosis is an age-related skeletal disease characterized by decreased bone mineral density (BMD) and bone structure deterioration resulting in increased risk of fractures [1]. It represents an important public health problem, as it is one of the main causes of disability and mortality in the elderly [2]. Osteoporosis affects mainly postmenopausal women, due the estrogen decline [3], but many other contributing factors, such as genetic and metabolic disorders, lifestyle, environmental and inflammatory factors could intervene [4,5,6,7]. In addition to the search for effective antiosteoporotic drugs [8,9,10], also the identification of new osteoporotic risk factors that can be modified is of paramount importance. Beside the well-known classic risk factors [1], recent studies have suggested that also elevated homocysteine (Hcy) serum levels may represent a risk factor for osteoporosis and skeletal fractures [11].
Hcy is a sulfur amino acid, which is formed following the loss of a methyl group by the essential amino acid methionine. Hcy is then metabolized, and vitamin B12 and folate play an important role as cofactors in this process. The enzyme 5-methylenetrahydrofolate reductase (MTHFR), involved in the metabolism of folate, is essential for the remethylation of Hcy to methionine, through the intervention of vitamin B12 [12]. The serum concentration of Hcy, under physiological conditions, is between 5 and 12 µmol/L. An alteration in the pathways of metabolism of Hcy determines a condition of hyperhomocysteinemia.
Both genetic and acquired hyperhomocysteinemia can cause important pathological changes in the body [13]. The most common genetic defect that can cause hyperhomocysteinemia is the MTHFR gene C677T polymorphism: the prevalence of such homozygotes in Europe can reach 20% while the frequency of heterozygotes is calculated as 30–40%, resulting in a reduction of the corresponding enzyme that can be responsible for a slight to moderate hyperhomocysteinemia [14]. Another common condition which can cause an increase in serum Hcy levels is vitamin B12 and/or folate deficiency, which prevents the correct process of remethylation from Hcy to methionine [15,16]. Moreover, both aging and menopausal estrogen deficiency are accompanied by an increase in blood Hcy levels [17].
It is well established that hyperhomocysteinemia represents an independent risk factor for age-related chronic inflammatory diseases, including Alzheimer and cardiovascular diseases [18]. Osteoporosis shares the same inflammatory background with these conditions [19]. Moreover, a compromised bone health is observed in patients with homocystinuria, a rare autosomal recessive disease characterized by very high Hcy serum levels. In particular, a low BMD is common in both children and adults with homocystinuria, as assessed by bone densitometry [20]. Further evidence of a possible role of Hcy in osteoporosis comes from the observation of Hcy, vitamin B12 and folate plasma level association with increased risk of fractures [21,22]. For these reasons, a role of Hcy in the pathogenesis of osteoporosis has been postulated, suggesting that hyperhomocysteinemia may be responsible for decreased BMD, bone deterioration, and osteoporotic fractures. However, literature data concerning the link between Hcy and osteoporosis are still debated [23,24,25].
Biochemical markers of bone turnover are divided into markers of bone formation and bone resorption. Bone formation markers are products of active osteoblasts produced during the new bone synthesis. They include the osteoblast enzyme bone-specific alkaline phosphatase (BAP) and the matrix protein osteocalcin (OC). Markers of bone resorption are formed during the degradation phase of bone remodeling, such as the collagen degradation product C-terminal telopeptide of type 1 collagen β cross laps (CTX). All these markers can be measured in the blood.
Vitamin Dplays a central role in regulating bone homeostasis andrepresents another important marker of bone health. Moreover, it is also involved in the direct regulation of cystathionine beta-synthase, a central enzyme in Hcy metabolism.Reduced serum levels of vitamin D may therefore lead to elevated Hcy levels, which in turn may lead to altered bone quality [16].
The aim of our study was to assess the relationship among Hcy, inflammation, B vitamin status and bone turnover in postmenopausal osteoporosis. To this purpose, we measured the Hcy serum level; inflammation indexes, such as erythrocyte sedimentation rate (ESR) and C-reactive protein (CRP); and bone turnover markers in postmenopausal osteoporotic women and healthy controls.To evaluate bone metabolism, we measured the bone resorption marker CTX, as well as BAP and OC as markers of bone synthesis [26]. In addition, we also searched for vitamin D, B12 and folate deficiencies and MTHFR gene C677T polymorphism, which can lead to elevated Hcy levels in the blood [14,22].

Two-hundred and fifty two postmenopausal women, aged 50–65 years (mean age 62 years), among those observed on an outpatient basis at the Center for Osteoporosis of L’Aquila University at the Hospital of Teramo, were recruited in the study. As previously described [27,28], subjects were selected on the basis of a careful clinical examination and medical history, to rule out any co-morbidities and/or therapies that could influence bone resorption [29]. BMD measurements were performed by using dual energy X-ray absorptiometry (DXA) (Hologic QDR 4500 W machine) at the lumbar spine and hip. BMD values were expressed as T-score, i.e., the difference between the BMD value of the examined subject and the mean value in the healthy reference population. Diagnosis of osteoporosis was made according to the World Health Organization criteria [30,31]: a reduction in BMD, indicative of osteoporosis and/or osteopenia, is defined by T-score values lower than −1.5 (osteoporosis <−2.5 and osteopenia between −1.5 and −2.5), whereas T-score values above −1.5 indicate a normal BMD.
Laboratory parameters were collected from all subjects. Serum Hcy concentrations were measured by using a chemiluminescence immunoassay method (ARCHITECT Homocysteine Reagent Kit–Abbott Diagnostics) [32]. Collected data also included inflammation indices, such as CRP and ESR and serum concentrations of vitamin D, B12 and folate, analyzed by chemiluminescence immunoassay systems (ADVIA Centaur® ReadyPack™ assays, Siemens Healthcare GmbH, Erlangen, Germany) and bone turnover biomarkers such as OC, BAP (Chemiluminescence immunoassay “CLIA”-DiaSorin LIAISON® test, DIASORIN via crescentino snc—Saluggia (Vc), Italy) and CTX (Electrochemiluminescence immunoassay “ECLIA”–ElecsysCobas analytics Roche Diagnostics CH—Basel, Switzerland.). The coefficients of variation (CV) in these methods for the overall reliability of our immunological test results were less than 10%. MTHFR gene C677T polymorphism (MTHFR-C677T), searched by Real Time PCR (MTHFR C677T Mutation Creative Biogene Real Time PCR Kit), was also evaluated. The kit contains a specific ready-to-use system for the detection of MTHRF gene site C677T Mutation in whole blood sample by polymerase chain reaction (PCR) in the real-time PCR system, including reagents and enzymes for the specific amplification of the site C677T Mutation gene DNA. Fluorescence is emitted and measured by the real time systems’ optical unit during PCR.
Clinical history, physical examination and instrumental analysis (spine radiography and vertebral morphometry to highlight any asymptomatic osteoporotic fractures) were also performed in each subject.
The present study was approved by the Internal Review Board of the University of L’Aquila, Italy (ex “Comitato etico di Ateneo” D.R. n. 206/2013 modified D.R. n. 46/2017), and conducted in accordance with the 1975 Helsinki Declaration and its subsequent amendments. Written informed consent was obtained from all participants.
The statistical analysis was performed with SPSS for Windows (version 17.0, IBM, Armonk, NY, USA). Data were expressed as means ± standard deviations (sd) and percentages, as appropriate. Differences between groups were analyzed by Student’s t-test for unpaired data and comparison between two proportions. Although most of the variables considered in the analysis are not normally distributed as testified by Shapiro–Wilk test, it is still possible to apply the parametric Student’s T test as, according to the Central Limit Theorem, the sample mean will be approximately normally distributed for large samples (n > 30) as the ones considered in the comparison.Correlation between variables was evaluated by Pearson’s correlation test. The level of statistical significance was set at p ≤ 0.05.

In summary, our study suggests a significant association between Hcy and postmenopausal osteoporosis. Notwithstanding the many efforts to effectively diagnose and prevent osteoporosis occurrence [2,59], the results are not fully satisfactory. An imbalance in Hcy metabolism may contribute to a derangement of bone remodeling, favoring the onset of osteoporosis. The regulation of Hcy overproduction and the modulation of the inflammatory substrate that characterizes menopause may represent additional therapeutic approaches for osteoporosis prevention and control. 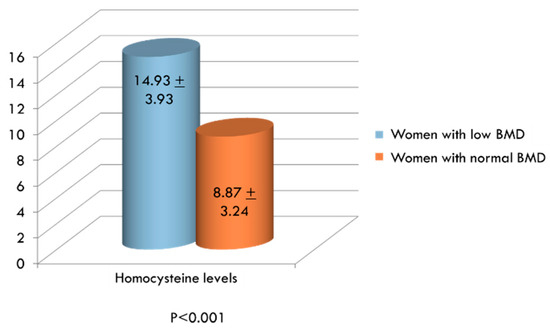 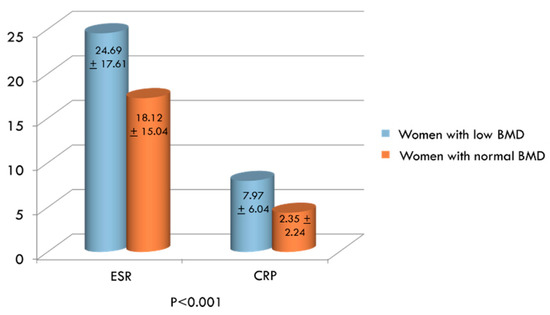 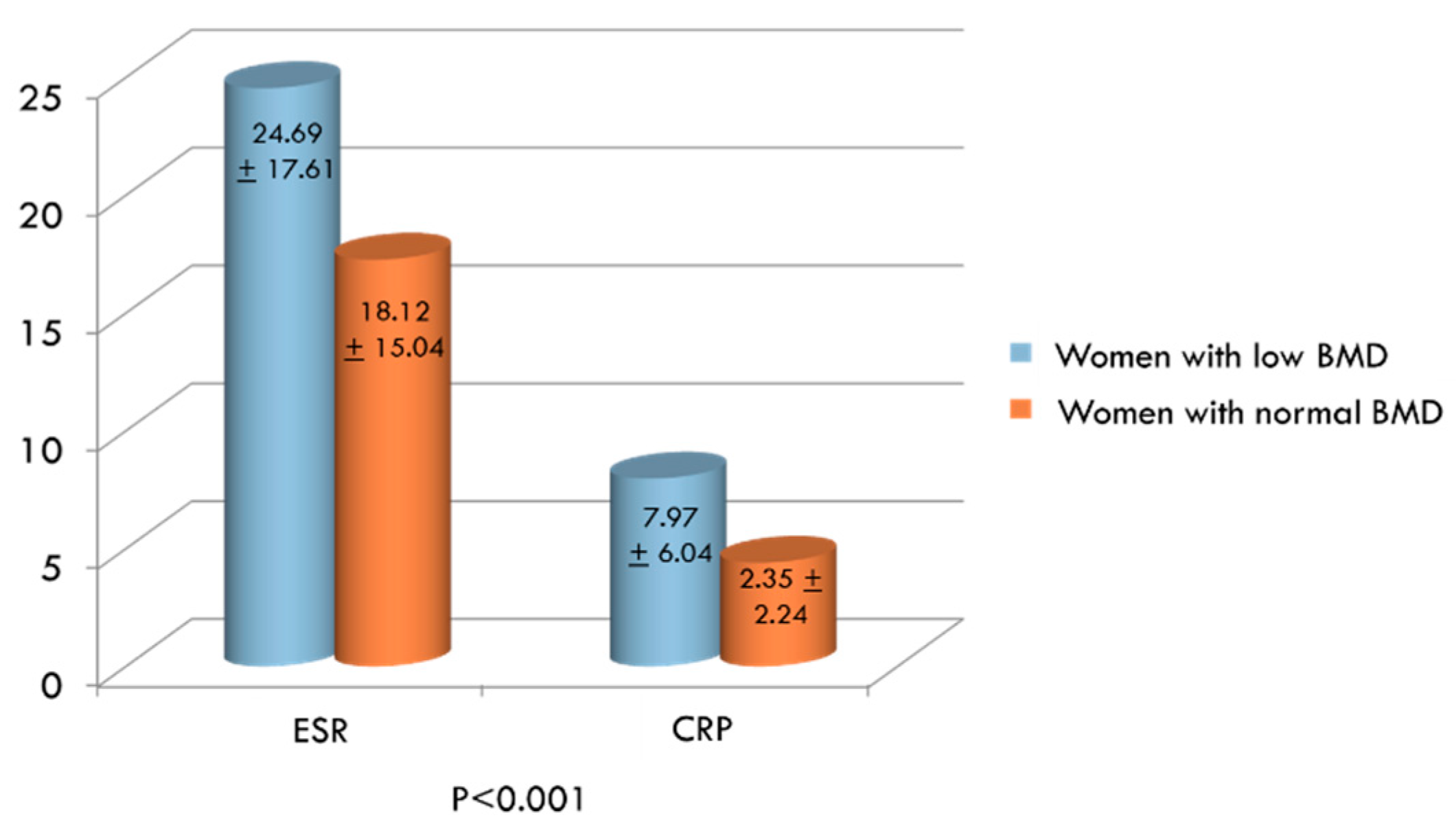 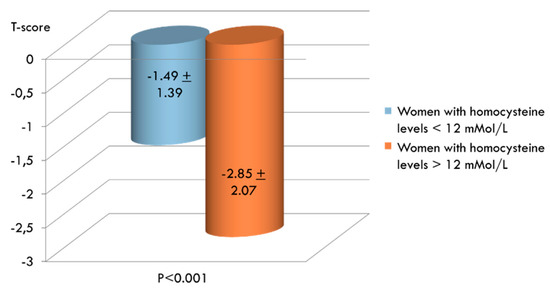 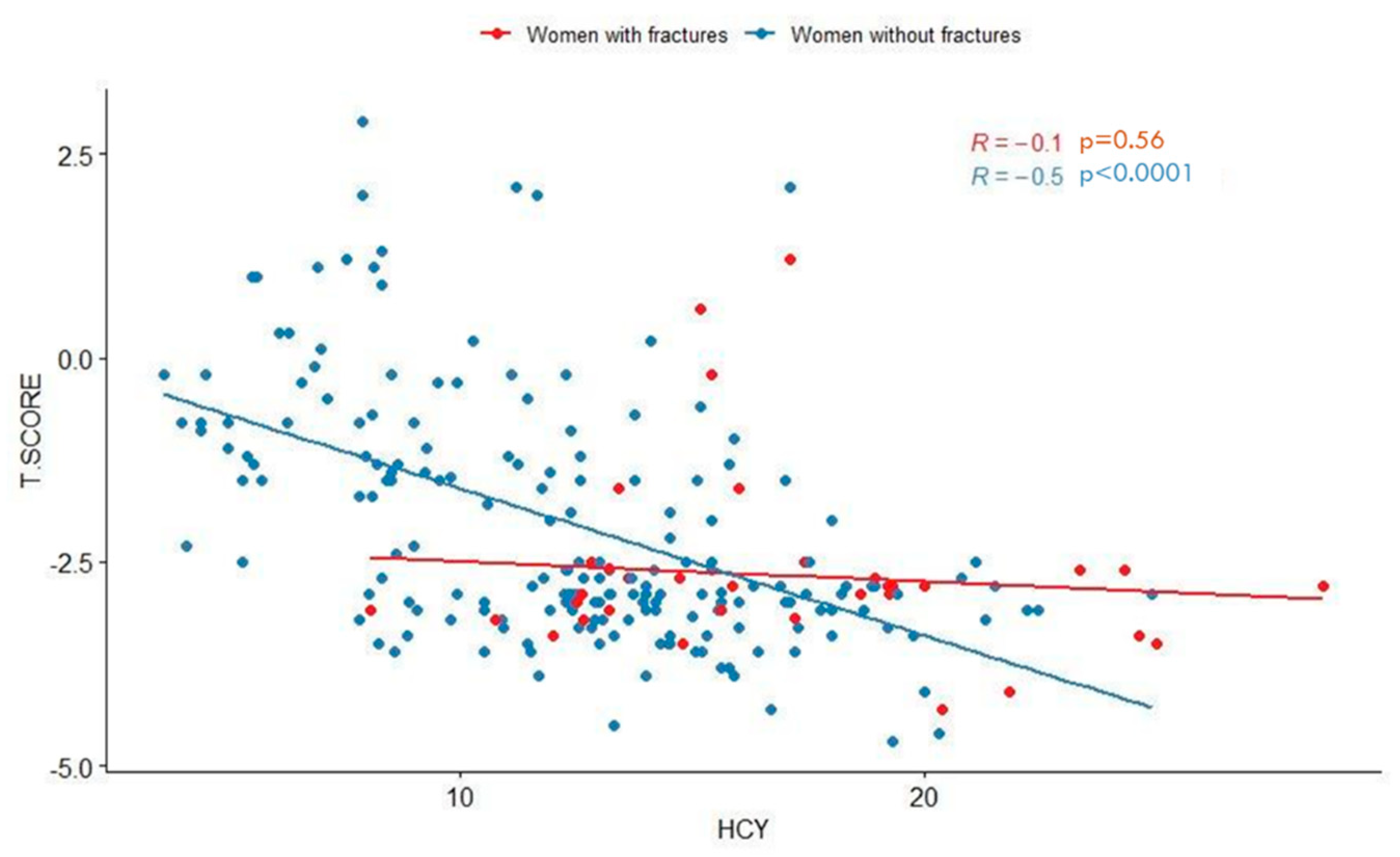