On the Use of Hair Analysis for Assessing Arsenic Intoxication

Background: Transgender people have a gender identity different from the one allocated to them at birth. In many countries, transsexualism and transgenderism are considered mental illnesses under the diagnosis of gender dysphoria. This pathologization impacts on human rights. Main content: The United Nations (UN) has denounced violations against trans-people, including attacks, forced medical treatments, lack of legal gender recognition, and discrimination in the areas of education, employment, access to healthcare, and justice. The UN has linked these violations directly with discriminatory diagnostic classifications that pathologize gender diversity. Trans-people have been pathologized by psycho-medical classification and laws all around the world, with a different impact depending on countries. This paper argues that pathologization infringes infringes upon a wide range of human rights such as; civil, economic, social cultural and also the access to medical care. Conclusions: The current situation for trans-people with respect to legal healthcare matters, depends on the country. Human rights are universal, not a question for cultural interpretation. They are the minimum that every human being must have assured only by the fact of being human. Countries must protect these rights by regulating trans-pathologization with special attention dedicated to intersex people and their specific needs. View Full-Text
Keywords: trans; transgender; gender identity; human rights; right to health; non-discrimination; pathologization trans; transgender; gender identity; human rights; right to health; non-discrimination; pathologization
►▼ Show Figures 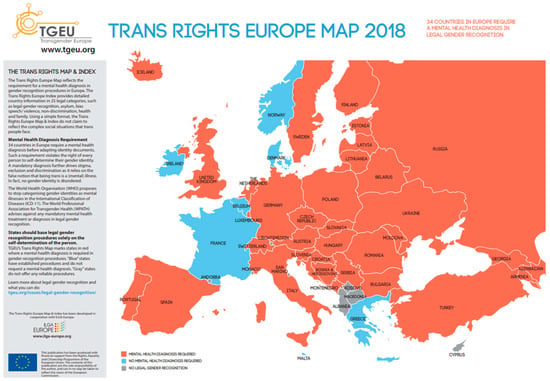