The Association of the Exposure to Work-Related Traumatic Events and Work Limitations among Firefighters: A Cross-Sectional Study

The Bioaccumulation and Tissue Distribution of Arsenic Species in Tilapia

Arsenic is a public concern due to its widespread occurrence and carcinogenicity. Consumption of arsenic-contaminated fish is an important exposure pathway for human health. This study focused on understanding how exposure to arsenic-contaminated fish is informative to human health risk assessment. While the bioaccumulation and tissue distributions of total arsenic concentration in fish are commonly reported, there are limited studies related to the time-course of arsenic species in various tissues. Using the Tilapia as a case, this study aimed to investigate the bioaccumulation and tissue distributions (liver, gastrointestinal (GI), muscle, and gill) of arsenic species in freshwater fish via diet-borne inorganic arsenic exposure. In particular, the Tilapia were exposed to arsenic (III) and As(V) for 32 days. The accumulation of arsenic in all tissues linearly increased with time in the first 10 days’ exposure, while the arsenic levels remained stable in the following 20 days’ exposure. The accumulation of arsenic in tissue followed the sequence of intestine > liver > gill > muscle. Meanwhile, more than 90% of arsenic was converted into organic form in liver, gill, and muscle, while organic arsenic contributed about 30–80% to the total arsenic in the GI. The percentage of organic form in muscle is the highest, followed by gill, liver, and intestine, and arsenobetaine is the main form of organic arsenic. While the exposure profiles of As(III) and As(V) are quite similar, the absorption rate of As(V) is relatively higher than that of As(III). Information provided here can be instrumental for exposure assessment and risk management for arsenic in aquatic environment. View Full-Text
Keywords: arsenic; tissue distribution; bioaccumulation; tilapia; risk assessment arsenic; tissue distribution; bioaccumulation; tilapia; risk assessment
►▼ Show Figures 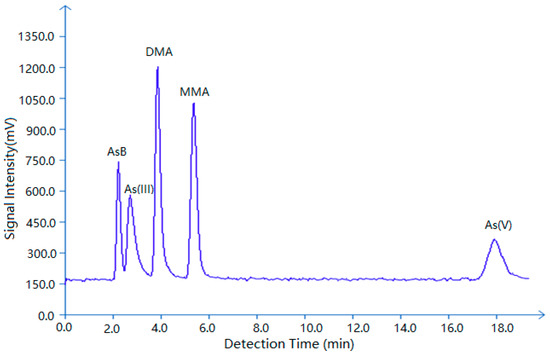