The Power of Recognition: A Qualitative Study of Social Connectedness and Wellbeing through LGBT Sporting, Creative and Social Groups in Ireland
Next Article in Special Issue

A Combination of Factors Related to Smoking Behavior, Attractive Product Characteristics, and Socio-Cognitive Factors are Important to Distinguish a Dual User from an Exclusive E-Cigarette User
Previous Article in Journal

The Use of HPLC-PDA in Determining Nicotine and Nicotine-Related Alkaloids from E-Liquids: A Comparison of Five E-Liquid Brands Purchased Locally

Convenience samples of flavored solutions used for these studies were labeled as made by Ecto World (https://www.ectoworld.com) and purchased locally from a single vender (Cloud 9 Smokes and Vapors, 476 Elmwood Ave, Buffalo, NY, USA). Products were labeled as Menthol, Vanilla Cupcake, American Tobacco, and Strawberry Blast with 0 mg nicotine. These four were selected as a pilot to both assess actual products in use and to include a range of popular flavorings based on published literature [34,38,43]. Non-targeted analysis of e-liquids was performed as previously published using gas chromatography–mass spectrometry (GCMS) to determine constituents and confirm that samples were nicotine free [30]. Briefly, 10 µL of each sample was diluted with 1 mL methanol (Fisher Scientific; Waltham, MA) and analyzed by GCMS using an Agilent 7890B GC and an Agilent 5977A MS (Santa Clara, CA). An HP−5 30 m × 0.320 mm × 0.25 m capillary column (Agilent) with a flow rate of helium of 1.7 mL/min was utilized. Temperature of the injector and the detector was 250 °C, and the column temperature increased from 110 to 250 °C (10 °C/min) with a hold for 1 min. The injection volume was 1 µL with a split ratio of 40:1. Qualitative analysis of the flavored liquids was carried out using the NIST 14 Mass Spectral Library (U.S. Department of Commerce) as well as the Flavors and Fragrances of Natural and Synthetic Compounds 3 flavoring library.

Cell death was determined using a lactate dehydrogenase (LDH) assay (Biovision, San Francisco, CA). Using an enzymatic coupling reaction, LDH was quantified in the supernatant and the tritonized cell lysate. LDH activity was determined by spectrophotometric reading at OD450. Percent cell death was calculated as concentration in supernatant/concentration in lysate × 100. Dilution at which 50% cell death would occur (lethal dose or LD50) was calculated assuming linear dose dependency (from studies in which testing of two doses concurrently was possible) with extrapolation of values out to a 1:10 dilution.

Airways and vessels from pregnant ewe and newborn lambs were collected following sacrifice of animals utilized for a separate experimental protocol evaluating transitions at birth. For those studies, newborn lambs were delivered by c-section as part of an Institutional Animal Care and Use Committee at the State University of New York at Buffalo approved protocol (PED10085N). C-section was performed under 4% isoflurane anesthesia. Newborn lambs were ventilated for 4–6 h prior to sacrifice, during which time they received fentanyl titrated from 0–5 mcg/kg/h. Ewes and lambs were euthanized following delivery and completion of the study with pentobarbital (100 mg/kg). Animals were exposed to purified air or oxygen only prior to sacrifice.
The intrapulmonary arteries (PA) and the fifth generation bronchial rings (BR) were dissected, washed in Krebs solution (NaCl 119 mM, KCl 5.4 mM, CaCl2 2.5 mM, KH2PO4 0.6 mM, MgSO4 1.2 mM, NaHCO3 25 mM, and glucose 11.7 mM), and hung in vessel baths aerated with 21% O2 and 6% CO2 to achieve a pH of 7.4, as described previously [50]. The samples were mounted and stretched to a passive tension of 800 mg (PA) and 1000 mg (BR) to optimize reactivity to experimental agents. A continuous recording of isometric force generation was obtained by tying each vessel ring to a force displacement transducer (model UC2, Statham Instruments, NY) that was connected to a recorder (Gould Instrument, OH). PA were pretreated with propranolol (10−6 M) to block the beta adrenergic effects and constricted with increasing titrations (10−8 to 10−5 M) of norepinephrine (propranolol and NE, Sigma Aldrich, MO). BR were constricted with increasing titrations (10−8 to 10−5 M) of 5-hydroxytryptamine (5-HT, Sigma Aldrich, MO).
To study responses to flavored solutions, PA and BR were preconstricted with half maximal effective concentration (EC50) of NE or 5-HT followed by treatment with a flavoring or 50/50 PG/VG at a 1:1000 dilution with companion preparation (5-HT or NE) alone used as time controls. Preconstriction to EC50 allowed tested e-liquids to further constrict or relax as is physiologically relevant. Following experimental treatment, PA and BR were washed with Krebs solution. Maximal contractile response to 118 mM/L of potassium chloride (KCl) was obtained. Wet tissue weights were obtained at the end of each experiment, and constriction responses were normalized to tissue weight and compared as percentages of relaxation of the EC50 constriction. Data were analyzed as force of constriction per unit of tissue weight (grams of force per gram of tissue weight) of the vasoconstrictor agent. Response to flavored solutions was expressed as a percentage of maximal constriction of 5-HT or NE.

Continuous variables were analyzed using a Student’s t-test or ANOVA as appropriate with Tukey’s post hoc analysis. A p value of ≤0.05 was considered statistically significant. For cellular experiments, 2–3 wells on a plate were treated for each condition, and the average result considered one n with >6 n from independent cell platings for all studies. For vessel and airway reactivity, replicate tissues from 4 adult and 6 neonatal lambs were studied.

Non-targeted GCMS analysis confirmed that the Ecto flavored solutions did not include nicotine in two batches of the four flavors used in the study. The two batches were purchased nine months apart with the second batch being nine months old at chemical analysis. Consistent with prior publications [33,38], non-targeted GCMS analysis identified a large number of chemicals present in each of the four samples with variability between batches (Table 1).
Flavorings common to all four included benzophenone (CAS 119-61-9), hydroxyacetone (CAS 116-09-6), and ethyl maltol (CAS 11-8-4940). Unique flavoring chemicals were identified with each flavored solution; however, there was significant overlap in chemicals present in the four studied. Menthol had the most unique chemical flavorings present while tobacco had the least (Figure 1 and Supplementary Table S1). GCMS did not allow for quantification of the specific chemicals present.

As pulmonary blood vessels actively promote alveolar development and contribute to the maintenance of alveolar structures throughout postnatal life [54], we chose to evaluate the toxicity of flavored solutions on pulmonary artery smooth muscle cells (PASMC). To determine relative toxicity in immature versus mature cells, fetal, neonatal, and adult PASMCs were exposed to a select panel of flavored solutions, pure PG, or VG for 24 h at variable dilutions (1:100, 1:1000, 1:10,000). Cell death was flavoring dependent, with the greatest to the least toxicity observed with menthol, strawberry, tobacco, and vanilla flavorings. Exposure to 1:100 dilution of menthol and strawberry solutions induced significant cell death in fetal, neonatal, and adult cells (control: 15.2 ± 3.5, 13.6 ± 2.7, 15.6 ± 2.9%; menthol: 57.9 ± 6.2, 74.5 ± 4.9, 46.3 ± 7.7%; strawberry: 47.6 ± 6.2, 47.2 ± 5.5, 44.8 ± 7.9% for fetal, neonatal and adult PASMC, respectively). Immature cells were more susceptible to menthol toxicity with the greatest cell death documented in neonatal cells (Figure 2A). In contrast, exposure to tobacco and vanilla solutions did not significantly impact viability as compared to untreated controls. In addition, treatment with unflavored, nicotine-free VG and PG resulted in no significant increase in cell death (Figure 2B), implicating additional flavoring or non-flavoring chemicals present in the refill solutions for the death observed in Figure 2A. Calculated LD50s suggested increased susceptibility to flavored solutions in immature PASMC as compared to adults, with lower calculated concentration noted for fetal and neonatal PASMCs in all four tested flavorings as compared to adults (Table 2).

Gestational and postnatal exposure to electronic cigarettes represents rapidly growing threat to the fetal and the newborn population. Use of added flavorings with vaping has far out-paced our understanding of their implications for public health. Our data suggesting a developmental susceptibility with exposure to common flavoring solutions argue the critical need for further thoughtful evaluation of these products. 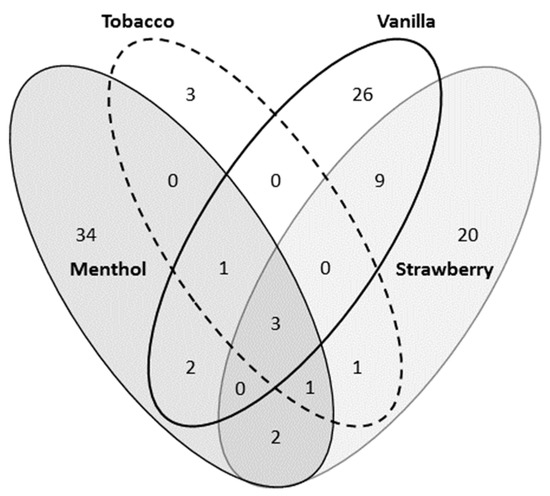 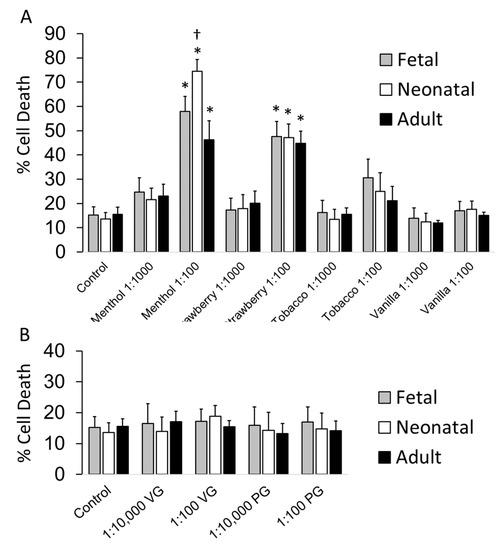 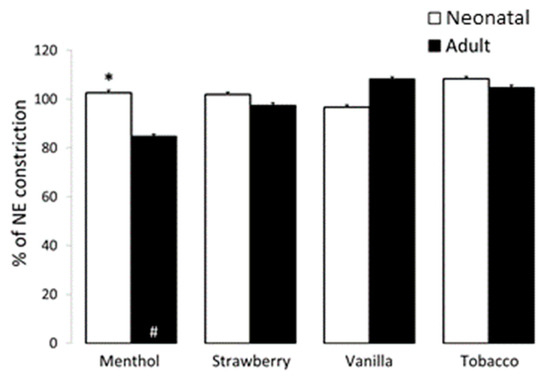