An Intervention to Improve Uptake of Referrals for Children with Ear Disease or Hearing Loss in Thyolo District, Malawi: Acceptability and Feasibility

This study developed the Children’s Vitality-Relaxation Scale (CVRS) by revising the adult version of the Restoration Outcome Scale (ROS). The CVRS was translated and culturally adapted into Korean, and its reliability and validity were evaluated in a cross-sectional, descriptive design study. Data collected from 181 elementary school students in grades 4‒6 were used to test the validity and reliability of the CVRS. Exploratory factor analysis, Pearson’s correlation, known-groups comparison, and Cronbach’s alpha were used for analysis. The factor analysis indicated a two-factor structure, and all factor loadings were above 0.40. The CVRS was a seven-point Likert scale consisting of eight items, which were classified as “vitality” (four items) and “relaxation” (four items). The external construct validity with the PANAS, PSS, and SRI was acceptable. In the known-groups comparison, the CVRS score was significantly higher for boys than for girls, and the CVRS score for high-income students was higher than low-income students. The Cronbach’s α for the scale was 0.84 and ranged from 0.72–0.87 for the subscales. Results showed that the CVRS is a valid and reliable scale with acceptable psychometric characteristics in Korean children. The scale can be used to measure children’s affect in various settings. View Full-Text
Keywords: affect; child; scale development affect; child; scale development
►▼ Show Figures 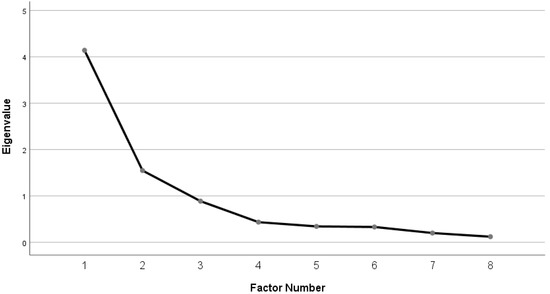