Impact of Antidepressant Use on Healthcare Utilization among Individuals with Type 2 Diabetes and Depression Symptoms in the United States: Sociodemographic, Clinical, and Behavioral Factors Matter
Previous Article in Journal

Analysis of the Spatial Variability of Soil Texture in a Tropical Highland: The Case of the Jema Watershed, Northwestern Highlands of Ethiopia

This study sought to analyze the degree of spatial association of soil texture with agro-climatic zones and slope classes on the farmlands of the Jema watershed, in the Northwestern Highlands of Ethiopia. The agro-climatic zones (elevation zones) determine the micro-climate and biota of the study area. Thirty six soil composite samples for texture (the proportion of clay, silt and sand) analysis from four agro-climatic (elevation) zones and seven slope classes were collected. One-Way-ANOVA was employed to compute the mean variability of texture among the identified terrain classes, and linear regression was used to analyze the degree of association between texture and the terrain attributes. The measured values of sand, silt and clay in the watershed ranged from 11.4 to 43.4, 6.0 to 34.8, and 21.8 to 77.8, respectively. The One-Way-ANOVA indicated a significant (p < 0.05) soil texture variation in both slope and agro-climatic zone classes. Heavy clay, clay and clay loam were identified as the major texture classes in the lower, middle and upper parts of the watershed, respectively. The regression analysis showed that texture was more influenced by the difference in the elevation values than in slope values in the watershed. The standardized beta coefficients of slope and elevation for clay particles were 0.499 and 0.767, respectively. For sand, the regression coefficients for slope and agro-climatic zone were 0.485 and 0.812, respectively. This implies that an interactive effect of micro-climate and biota governed by elevation influenced the spatial distribution of soil texture more than slope. View Full-Text
Keywords: soil texture; agro-climatic zones; spatial distribution; farmlands; Ethiopian highlands soil texture; agro-climatic zones; spatial distribution; farmlands; Ethiopian highlands
►▼ Show Figures 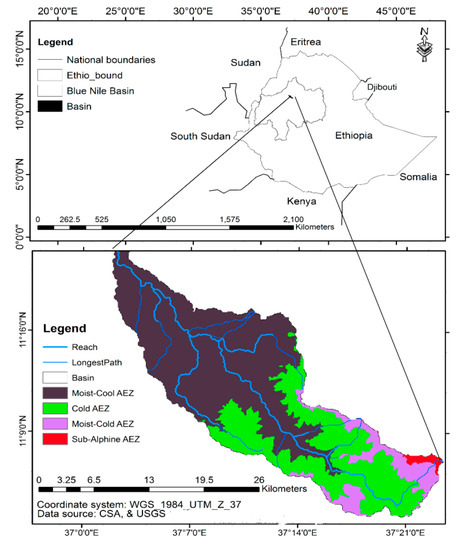 
Taye M, Simane B, Selsssie YG, Zaitchik B, Setegn S. Analysis of the Spatial Variability of Soil Texture in a Tropical Highland: The Case of the Jema Watershed, Northwestern Highlands of Ethiopia. International Journal of Environmental Research and Public Health. 2018; 15(9):1903.