Polybrominated Diphenyl Ether (PBDE) flame retardants are environmental chemicals that cross the placenta during pregnancy and have shown evidence of neurotoxicity. As the in utero period is a sensitive developmental window, such exposure may result in adverse childhood outcomes. Associations between in utero PBDE exposure and neurodevelopment are found in animal models and increasingly in human population studies. Here, we review the epidemiological evidence of the association between prenatal exposure to PBDEs and motor, cognitive, and behavioral development in infants and children. Published work suggests a negative association between PBDE concentrations and neurodevelopment despite varying PBDE congeners measured, bio-specimen matrix used, timing of the biological sampling, geographic location of study population, specific developmental tests used, age of children at time of testing, and statistical methodologies. This review includes 16 published studies that measured PBDE exposure in maternal blood during pregnancy or in cord blood at delivery and performed validated motor, cognitive, and/or behavioral testing at one or more time during childhood. We evaluate possible mediation through PBDE-induced perturbations in thyroid function and effect measure modification by child sex. While the majority of studies support an adverse association between PBDEs and neurodevelopment, additional research is required to understand the mechanism of action, possibly through the perturbations in thyroid function either in the pregnant woman or in the child, and the role of biologically relevant effect modifiers such as sex. View Full-Text
Keywords: polybrominated diphenyl ethers (PBDEs); child neurodevelopment; child cognition; child behavior; child motor development; review polybrominated diphenyl ethers (PBDEs); child neurodevelopment; child cognition; child behavior; child motor development; review
►▼ Show Figures 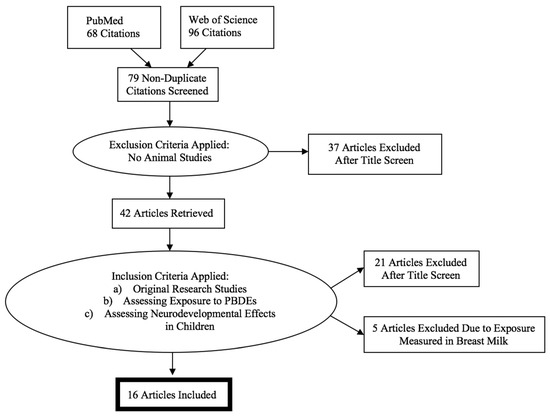