Determining Multi-Layer Factors That Drive the Carbon Capability of Urban Residents in Response to Climate Change: An Exploratory Qualitative Study in China
Previous Article in Journal

An Analysis of Reported Dangerous Incidents, Exposures, and Near Misses amongst Army Soldiers

Occupational health and safety incidents occurring in the military context are of great concern to personnel and commanders. Incidents such as “dangerous incidents”, “exposures”, and “near misses” (as distinct from injuries, illnesses, and fatalities) indicate serious health and safety risks faced by military personnel, even if they do not cause immediate harm. These risks may give rise to harm in the future, if not adequately addressed, and in some cases the incidents may cause latent harm. The purpose of this study was to ascertain the rates and patterns of incidents of these types reported by full time (ARA) and part time (ARES) Australian Army personnel. A retrospective cohort study was performed using self-reported incident data from the Workplace Health, Safety, Compensation and Reporting (WHSCAR) database over a two-year period. Data were analysed descriptively. Of 3791 such incidents, 3636 (96 percent) occurred in ARA and 155 (4 percent) in ARES personnel, somewhat consistent with the proportions of total army person-years served in each (ARA 93 percent; ARES 7 percent). In ARA, 84 percent of these incident types were exposures, 14 percent near misses, and 2 percent dangerous incidents. In ARES, 55 percent of incidents were exposures, 38 percent near misses, and 7 percent dangerous incidents. Soldiers at the rank of ‘private’ experienced the highest rates of these incident types, in both ARA and ARES. Driving gave rise to more near misses than any other activity, in both populations. Exposures to chemicals and sounds were more common in the ARA than ARES. The ARES reported higher proportions of vehicle near misses and multiple mechanism dangerous incidents than the ARA. The findings of this study can usefully inform development of risk mitigation strategies for dangerous incidents, exposures, and near misses in army personnel. View Full-Text
Keywords: full-time; part-time; military; tactical; army; reserve; risk; army; incidents full-time; part-time; military; tactical; army; reserve; risk; army; incidents
►▼ Show Figures 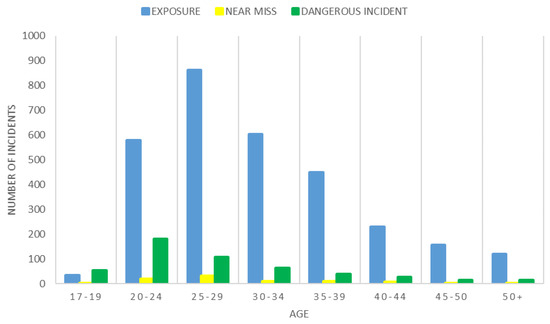