“Everybody Puts Their Whole Life on Facebook”: Identity Management and the Online Social Networks of LGBTQ Youth
Previous Article in Journal

Chronic sarcoidosis progresses to fibrotic disease in approximately 10–20% of patients [1]. Fibrotic disease is characterized by a progression of chronic inflammation to fibrotic transformation, and may include upper and middle lung predominant findings of traction bronchiectasis, bronchial distortion, linear opacities, fibrotic masses, honeycombing, or cysts [1,2].
Patients with fibrotic sarcoidosis commonly experience acute episodes of clinical worsening and lung function decline [3,4]. These acute pulmonary exacerbations of sarcoidosis (APES) have been described by decline in pulmonary function, worsening pulmonary symptoms such as cough, sputum, and shortness of breath, increase in biomarkers of disease activity, need to start or restart corticosteroid therapy, and exclusion of alternative causes of pulmonary symptoms and dysfunction [3,4,5]. Risk factors for exacerbations include underlying bronchiectasis, longer disease duration, African American race, previous steroid treatment, and anti-tumor necrosis factor (TNF) therapy [4]. Acute pulmonary exacerbations are typically treated with antibiotics and/or corticosteroid therapy [3,4,5].
Short-term air pollution exposure is associated with exacerbations of other pulmonary diseases such as chronic obstructive pulmonary disease (COPD) [6], asthma [7], and cystic fibrosis [8], which share clinical characteristics with exacerbations of fibrotic sarcoidosis. The effect of elevated short-term air pollution exposure on sarcoidosis is unknown. We aimed to evaluate if short-term exposure to ozone and fine particulate matter (PM2.5) is associated with increased symptoms or lung function decline in an exploratory study of a small cohort of patients with fibrotic sarcoidosis.

We performed a secondary analysis of an electronic database of adult fibrotic sarcoidosis cases generated for a separate study [9]. All patients in this analysis had testing performed at the University of Cincinnati Medical Center. Patients with a history of two or more acute exacerbations in the previous year were enrolled in a randomized controlled trial evaluating roflumilast for reducing episodes of acute exacerbation in fibrotic sarcoidosis. All participants had experienced at least two exacerbations of their sarcoidosis in the prior year, with an exacerbation defined as an acute event requiring increase of prednisone, with or without use of antibiotics, and no other etiology identified [4]. For inclusion in the study, patients were between 18 and 70 years of age and had a diagnosis of sarcoidosis by American Thoracic Society (ATS) criteria [10], ratio of forced expiratory volume in 1 s (FEV1) to forced vital capacity (FVC) of less than 80%, fibrosis on chest X-ray and/or high-resolution computed tomography (CT) of the chest, and were on a stable dose of corticosteroids and other agents for sarcoidosis for at least four weeks. Exclusion criteria included renal dysfunction with creatinine > 3 mg/dL, moderate or severe liver disease, unstable cardiac disease, non-cutaneous malignancy treated in the past two years, unable to complete questionnaires or lung function testing. Participants completed testing every three months for one year, including spirometry, 6-min walk test, blood draw, and questionnaires. Pulmonary function testing was performed and interpreted according to the 2005 ATS and European Respiratory Society (ERS) guidelines [11,12], and pre-bronchodilator spirometric measurements were used for analysis. For this analysis, we included all patients who completed three or more testing visits. We then excluded two individuals residing in areas lacking air quality data.

Eighteen air quality monitors in southwest Ohio were used for exposure estimation in this study; six recorded fine particulate matter (PM2.5) data only, eight recorded ozone data only, and four recorded both PM2.5 and ozone data. PM2.5 data was available at least every three days (one site provided daily data). Daily ozone data was available between the months of April and October (three monitors provided year-round data) during the study period (2013–2015). The data was gap-filled using linear interpolation to obtain daily values for each pollutant. The home street addresses for 16 patients (14 in the Cincinnati, OH, metro area, 1 in Dayton, OH, and 1 in Logan, OH, approximately 50 miles southeast of Columbus, OH) were geocoded to latitude/longitude coordinates. Using the home locations, daily pollutant exposure was estimated by kriging using the spherical semivariogram model [13]. Average pollutant exposure for 7, 10, and 14 days preceding each study visit was calculated for each patient. The interquartile range (IQR) was calculated for each pollutant and time period combination.

We employed generalized linear mixed effect models to evaluate the adjusted association between average PM2.5 and ozone exposure and lung function and questionnaire outcomes. All models adjusted for age, gender, smoking status, and study drug assignment. We estimated the coefficients and adjusted odds ratio (aOR) for each outcome associated with an IQR increase in average PM2.5 or ozone level. Statistical analyses were conducted using R [18].

In this small cohort of patients with fibrotic sarcoidosis, increased PM2.5 exposure was associated with increased severity of respiratory and quality of life symptoms indicated by a decrease in lung specific health status and general health status using the validated King’s Sarcoidosis Questionnaire. These findings suggest that short-term exposure to PM2.5 may adversely affect patients with fibrotic sarcoidosis.
To our knowledge, this is the first study to evaluate effects of short-term air pollution exposure on health outcomes in fibrotic sarcoidosis. Prior epidemiologic studies have demonstrated associations between environmental exposures and development of sarcoidosis. These have included microbially-rich environments such as agricultural exposures and mold and mildew, insecticides, industrial organic and inorganic dust, particulate matter and debris from the World Trade Center disaster, and metal industries [19,20,21,22,23,24,25]. These studies suggest that exposure to many different antigens in the environment and workplace may play a role in triggering a granulomatous immune response leading to sarcoidosis. Our study suggests that environmental exposures may also contribute to episodes of clinical worsening in this disease.
We did not detect an association of air pollution exposure with lung function outcomes. Even in the absence of objective changes in pulmonary function, increased respiratory symptoms carry significance for patients’ overall health status. In idiopathic pulmonary fibrosis, dyspnea is a stronger prognostic parameter than other physiologic markers in predicting survival [26]. Patients with pulmonary fibrosis due to sarcoidosis have increased risk for respiratory failure and death and this phase of the disease does not respond as well to the usual treatments in sarcoidosis [27,28]. Identification of environmental exposures that contribute to clinical worsening may lead to opportunities for clinical improvement by reducing exposure.
We did not find any association of ozone exposure with lung function or symptom outcomes. Ozone levels were very low during this study and therefore we cannot exclude the possibility of health effects at higher levels. Additionally, there was less ozone data available during the winter months of the year due to some monitors only recording during warm months.
There are several important features of our study. We evaluated a well-defined cohort of patients with uncommon and severe manifestations of sarcoidosis. All participants had experienced two or more exacerbations of sarcoidosis requiring pharmacologic treatment in the year prior to the study period. This is the first time air pollution exposure effects have been evaluated in this specific disease state. Multiple evaluations of lung function and respiratory symptoms allowed for an evaluation of exposures over multiple time points. We were able to estimate air pollutant exposure at individual place of residence based on data from 18 monitors.
We recognize several limitations to our study. Exposure measures were imperfect, as they were based on observations from multiple monitoring stations recording pollutant data only every three days, and some ozone monitors were without year-round measurements. Similarly, the pollutant concentration estimates were made only for the place of residence, ignoring variability in exposure due to time spent indoors and at locations other than the primary residence. We were only able to evaluate effects of PM2.5 and ozone due to a limited number of monitoring stations in the region measuring other air pollutants. Air pollutants other than PM2.5 and ozone may have also contributed to respiratory symptoms. PM2.5 and ozone exposure levels in this region of Southwest Ohio, USA, were low to moderate, and thus our findings may not accurately reflect exposure effects for patients residing in regions with more extreme exposure patterns. Our sample size was very small, thus we were unable to accurately estimate the effect size, and can only identify that there is an association between PM2.5 exposure and increased respiratory symptoms. We consider this study to be exploratory, and our findings suggest further study with larger sample sizes is warranted to better explore the association of short-term air pollution exposure with health outcomes in fibrotic sarcoidosis.

In this exploratory study evaluating a small cohort of patients with fibrotic sarcoidosis, increased PM2.5 exposure was associated with increased severity of respiratory and quality of life symptoms indicated by a decrease in lung-specific and general health status using the validated King’s Sarcoidosis Questionnaire. A larger sample size is needed to evaluate the association of short-term air pollution exposure with other health outcomes in fibrotic sarcoidosis.

This work was supported by Astra Zeneca as well as the Center for Clinical and Translational Science and Training (CCTST) at the University of Cincinnati, which is funded by the National Institutes of Health (NIH) Clinical and Translational Science Award (CTSA) program (grant number 1UL1TR001425-01). The funding sources had no role in the design and conduct of the study; collection, management, analysis, and interpretation of the data; preparation, review, or approval of the manuscript; and decision to submit the manuscript for publication.

Dr. Baughman has received research support from Astra Zeneca, Genentech, Mallinckrodt, Gilead, and Bayer in the area of sarcoidosis treatment. Dr. Baughman has consulted for Mallinckrodt and Genentech in the area of sarcoidosis treatment. This study was approved by the Institutional Review Board of the University of Cincinnati. Individual patient consent was not required. 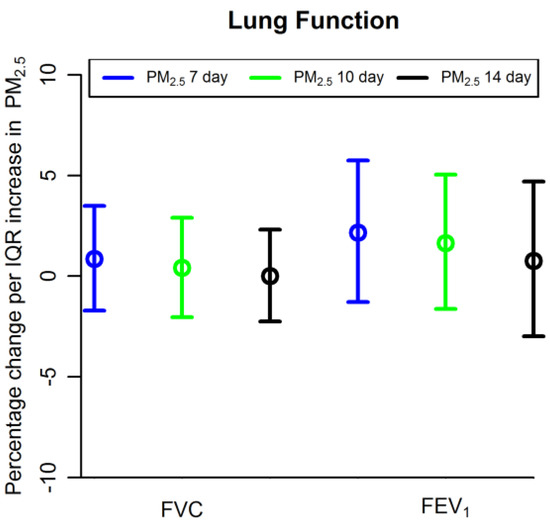 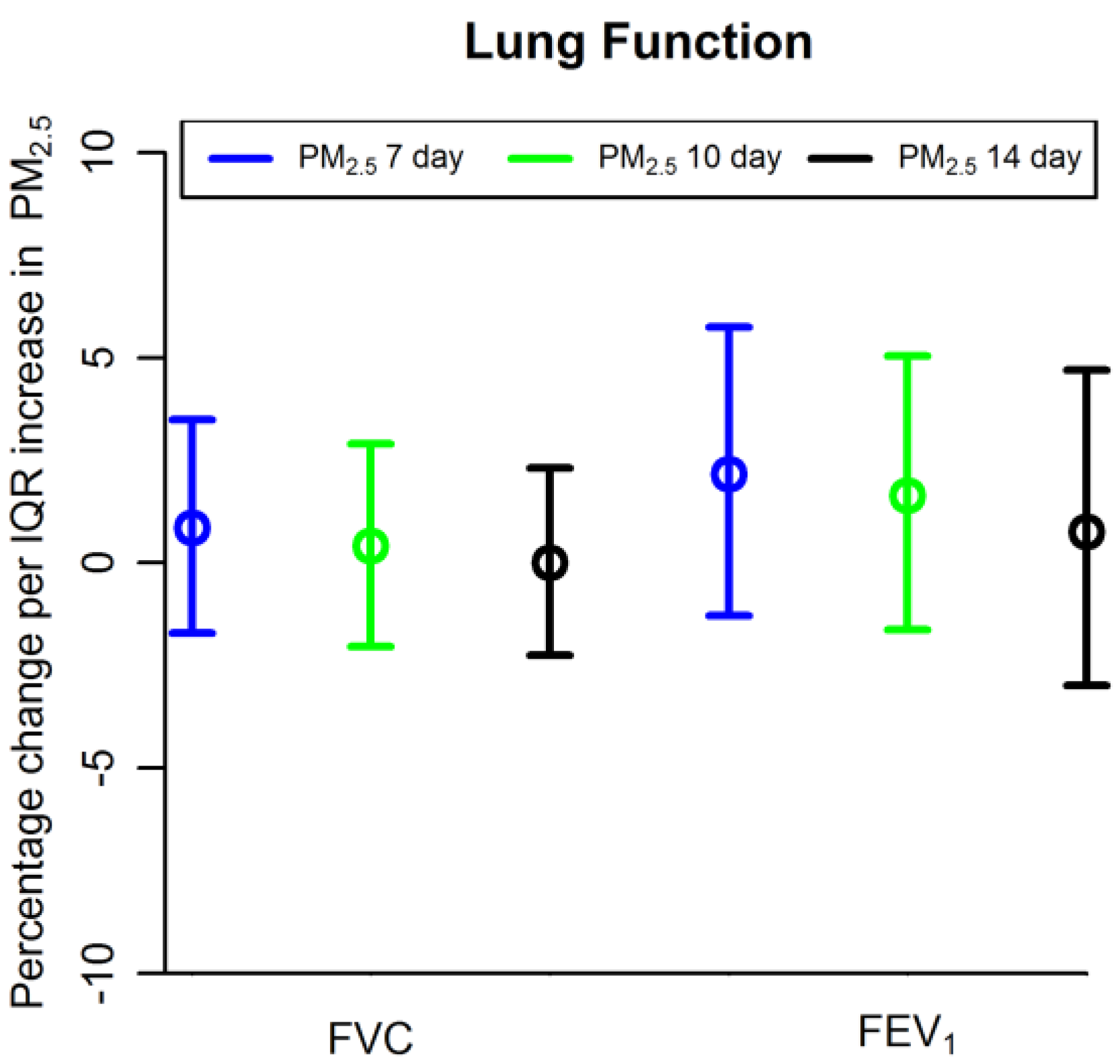 Table 4. Association between air pollution exposure and questionnaire outcomes.
Table 4. Association between air pollution exposure and questionnaire outcomes.
Adjusted association between short-term air pollution exposure (PM2.5 and ozone) and questionnaire outcomes in fibrotic sarcoidosis. Shown are regression coefficients (95% confidence interval) indicating questionnaire score change per IQR increase in air pollution exposure, * = p value < 0.05 for association. Interquartile range (IQR) for PM2.5 averaged over 7, 10, and 14 days = 4.92, 4.64, and 4.38 μg/m3, respectively. IQR for ozone averaged over 7, 10, and 14 days = 0.014, 0.014, and 0.014 ppm, respectively. All models adjusted for age, sex, smoking status, and study drug assignment. SGRQ: St. George’s Respiratory Questionnaire; LCQ: Leicester Cough Questionnaire; KSQ: King’s Sarcoidosis Questionnaire.
© 2018 by the authors. Licensee MDPI, Basel, Switzerland. This article is an open access article distributed under the terms and conditions of the Creative Commons Attribution (CC BY) license (http://creativecommons.org/licenses/by/4.0/).
We use cookies on our website to ensure you get the best experience. Read more about our cookies here.
Accept
We have just recently launched a new version of our website. Help us to further improve by taking part in this short 5 minute survey here. here.
Never show this again