Determinants of Inappropriate Admissions in County Hospitals in Rural China: A Cross-Sectional Study

In the Brazilian Amazon, where the majority of Yanomami villages are settled, mercury (Hg) exposure due to artisanal small-scale gold mining (ASGM) has been reported since the 1980s. This study assessed mercury exposure in the Yanomami reserve and whether the level of contamination was related to the ASGM geographical location. It was conducted using a cross-sectional study of 19 villages. Direct interviews were performed and hair samples were used as a bioindicator of Hg exposure. The Prevalence-Ratio (PR) was estimated as an indicator of association between ASGM geographical locations and human exposure to mercury. Mercury levels (239 hair samples) ranged between 0.4 and 22.1 μg·g−1 and presented substantial differences amongst the villages. In the Waikas-Aracaça region, where current ASGM was reported, we observed the highest Hg concentrations (median = 15.5 μg·g−1). Almost all participants presented with hair-Hg levels >6 μg·g−1 (prevalence = 92.3%). In the Paapiu region, we observed the lowest concentrations (median = 3.2 μg·g−1; prevalence = 6.7%). Our findings showed that the Waikas Ye’kuana and Waikas Aracaca villages presented with 4.4 (PR = 4.4; Confidence Interval (CI) 95% = 2.2–9.0) and 14.0 (PR = 14.0; CI 95% = 7.9–24.9) times higher prevalence of hair-Hg concentration, respectively, compared with Paapiu. Considering seasonal variation of Hg-exposure, the lowest concentrations were observed during the wet season (June–September) and the highest in the dry season (December–April). Our study suggests that there is an association between mercury exposure and ASGM geographical locations. View Full-Text
Keywords: mercury exposure; indigenous; Brazilian Amazon; environmental; public health; epidemiology mercury exposure; indigenous; Brazilian Amazon; environmental; public health; epidemiology
►▼ Show Figures 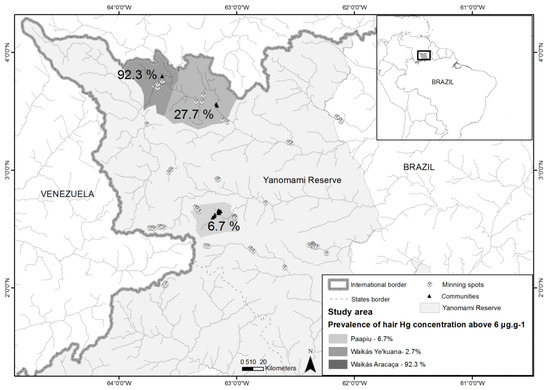