Effect of Drought on Agronomic Traits of Rice and Wheat: A Meta-Analysis

Graphs are prevalent in the reports of the Intergovernmental Panel on Climate Change (IPCC), often depicting key points and major results. However, the popularity of graphs in the IPCC reports contrasts with a neglect of empirical tests of their understandability. Here we put the understandability of three graphs taken from the Health chapter of the Fifth Assessment Report to an empirical test. We present a pilot study where we evaluate objective understanding (mean accuracy in multiple-choice questions) and subjective understanding (self-assessed confidence in accuracy) in a sample of attendees of the United Nations Climate Change Conference in Marrakesh, 2016 (COP22), and a student sample. Results show a mean objective understanding of M = 0.33 for the COP sample, and M = 0.38 for the student sample. Subjective and objective understanding were unrelated for the COP22 sample, but associated for the student sample. These results suggest that (i) understandability of the IPCC health chapter graphs is insufficient, and that (ii) particularly COP22 attendees lacked insight into which graphs they did, and which they did not understand. Implications for the construction of graphs to communicate health impacts of climate change to decision-makers are discussed. View Full-Text
Keywords: IPCC report; Health impacts; understanding of graphs; evidence-based science communication IPCC report; Health impacts; understanding of graphs; evidence-based science communication
►▼ Show Figures 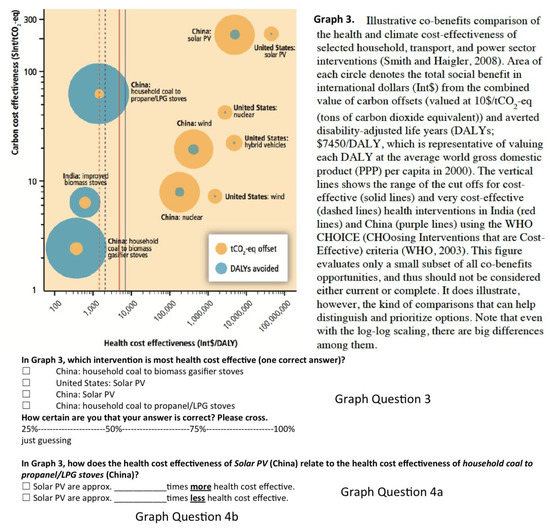