Dynamic Geochemistry of Tetraethyl Lead Dust during the 20th Century: Getting the Lead In, Out, and Translational Beyond

Associations between Urban Sprawl and Life Expectancy in the United States

In recent years, the United States has had a relatively poor performance with respect to life expectancy compared to the other developed nations. Urban sprawl is one of the potential causes of the high rate of mortality in the United States. This study investigated cross-sectional associations between sprawl and life expectancy for metropolitan counties in the United States in 2010. In this study, the measure of life expectancy in 2010 came from a recently released dataset of life expectancies by county. This study modeled average life expectancy with a structural equation model that included five mediators: annual vehicle miles traveled (VMT) per household, average body mass index, crime rate, and air quality index as mediators of sprawl, as well as percentage of smokers as a mediator of socioeconomic status. After controlling for sociodemographic characteristics, this study found that life expectancy was significantly higher in compact counties than in sprawling counties. Compactness affects mortality directly, but the causal mechanism is unclear. For example, it may be that sprawling areas have higher traffic speeds and longer emergency response times, lower quality and less accessible health care facilities, or less availability of healthy foods. Compactness affects mortality indirectly through vehicle miles traveled, which is a contributor to traffic fatalities, and through body mass index, which is a contributor to many chronic diseases. This study identified significant direct and indirect associations between urban sprawl and life expectancy. These findings support further research and practice aimed at identifying and implementing changes to urban planning designed to support health and healthy behaviors. View Full-Text
Keywords: urban sprawl; compactness; mortality; built environment; life expectancy urban sprawl; compactness; mortality; built environment; life expectancy
►▼ Show Figures 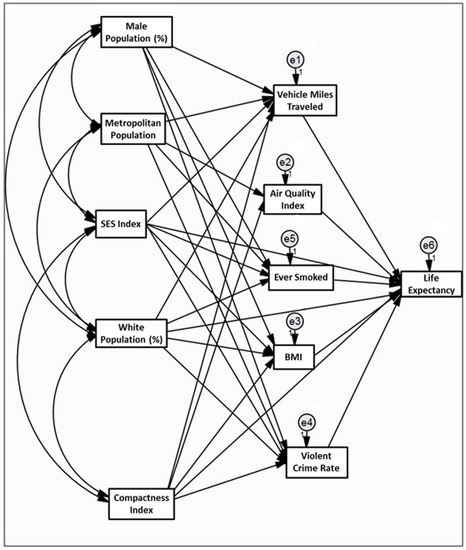