Source Apportionment of Polycyclic Aromatic Hydrocarbons in Sediment by the Application of Non-Negative Factor Analysis: A Case Study of Dalian Bay

Identifying the Driving Factors of Water Quality in a Sub-Watershed of the Republican River Basin, Kansas USA

Studies have shown that the agricultural expansion and land use changes in the Midwest of the U.S. are major drivers for increased nonpoint source pollution throughout the regional river systems. In this study, we empirically examined the relationship of planted area and production of three dominant crops with nitrate flux in the Republican River, Kansas, a sub-watershed of Mississippi River Basin. Our results show that land use in the region could not explain the observed changes in nitrate flux in the river. Instead, after including explanatory variables such as precipitation, growing degree days, and well water irrigation in the regression model we found that irrigation and spring precipitation could explain >85% of the variability in nitrate flux from 2000 to 2014. This suggests that changes in crop acreage and production alone cannot explain variability in nitrate flux. Future agricultural policy for the region should focus on controlling both the timing and amount of fertilizer applied to the field to reduce the potential leaching of excess fertilizer through spring time runoff and/or over-irrigation into nearby river systems. View Full-Text
Keywords: nonpoint source pollution; regression; land use change nonpoint source pollution; regression; land use change
►▼ Show Figures 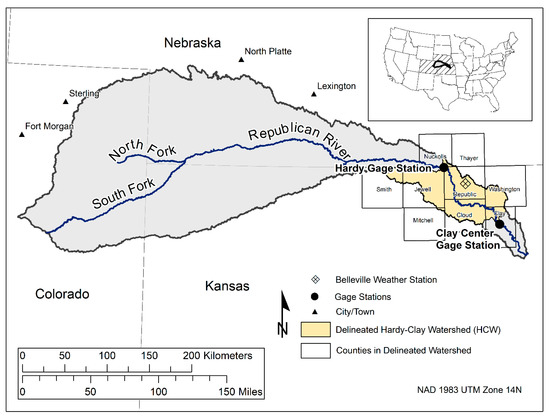