Early structural changes exist in the small airways before the establishment of Chronic Obstructive Pulmonary Disease (COPD). These changes are believed to be induced by oxidation. The aim of this study was to analyze the influence of short-term smoking on the expression of the genes contributing to airway remodeling and their relationship with the oxidative status of human blood cells. Blood mononuclear cells were isolated from 16 healthy volunteers and treated with cigarette smoke ingredients (CSI): nicotine, 1-Nitrosodimethylamine, N-Nitrosopyrrolidyne, vinyl chloride, acetone, and acrolein. The expression of TGF-β1, TIMP-1, SOD1, and arginase I was determined by qPCR. Additionally, thiol groups and TBARs were assessed. CSI induced TGF and TIMP-1 expression in peripheral blood mononuclear cells (PBMC), and apocynin alleviated this effect. The changes were more noticeable in the smoking group (p < 0.05). TBARs concentrations were higher in smokers, and in this group, apocynin acted more effectively. SOD1 correlated with arginase expression in smokers (p < 0.05). MMP-9 showed a significant correlation with SOD1 in both groups, but only on the protein level. Blood cells appear to mirror the general changes caused by cigarette smoke ingredients, which seem to be connected with the oxidative status of the cell. Our findings indicate that a short period of smoking influences the gene expression and oxidative balance of blood cells, which might result in the development of serious disorders such as COPD. View Full-Text
Keywords: cigarette smoking; PBMC; COPD; airway remodeling; apocynin; oxidative stress cigarette smoking; PBMC; COPD; airway remodeling; apocynin; oxidative stress
►▼ Show Figures 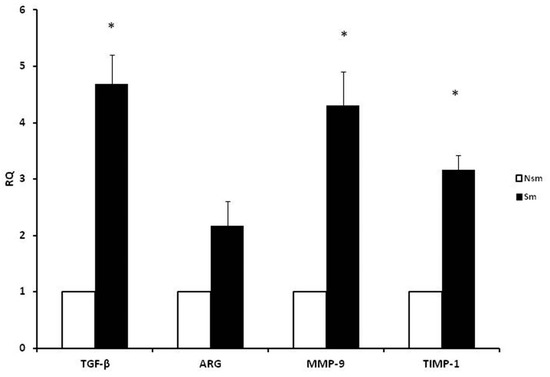