Dietary behaviors have been rapidly changing in Korea, and the phenomenon of eating alone more often in Korean society has been receiving considerable attention [1]. Korean society has long been dominated by collectivism and community but has been experiencing the creation of an ‘alone generation’. ‘Alone generation’ or loner are terms that have been used since 2010 for Koreans who willingly do activities alone [2,3]. These individuals eat, drink, and travel alone. The increasing prevalence of eating alone can be partially explained by a demographic perspective of increased single-person households, which reached 27.9% in 2016 [4], as well as by a cultural perspective of the expansion of individualism [5,6,7]. Eating alone, however, is not simply a dietary pattern, but is an outcome reflecting the structural and cultural changes in Korean society, such as changes in social relationships, long working hours, and a deepening individualist culture.
In previous studies, Korean university students [8] and Japanese men [9] who eat alone compared to those who eat with others were more likely to display unhealthy eating behaviors such as high consumption of fast foods. Increased risks for depression or depressive symptoms were observed in Japanese [10,11] and Chinese older adults [12] who eat alone, and a lower quality of life as measured by the EuroQol five-dimension questionnaire (EQ-5D) was found in Korean adult men who eat alone compared to those who eat with a companion [13]. In a nationwide Thai Cohort Study, feeling unhappiness was significantly associated with frequent eating alone [14].
Metabolic syndrome (MetS) is the combination of the metabolic disturbances of obesity, insulin resistance, dyslipidemia, and hypertension [15]. An increasing prevalence of MetS has been found in Korean adults in recent years [16]. The factors associated with the increasing prevalence of MetS in Korean adults may be due to the high meat dietary patterns [17], sugar-sweetened beverage patterns [18], higher body mass index (BMI), and current smoking rates [19].
Korea is experiencing a dramatic increase in the number of single-person households [4]. Previous research focused on the impact of the total frequency of eating alone occasions on health outcomes, such as weight status [8,20], MetS [21], and depressive symptoms [12] or depression [10,22]. However, to the best of our knowledge, the impact of different combinations of eating alone patterns in terms of breakfast, lunch, or dinner on the risk of MetS in a representative sample of Korean adults has not yet been fully explored. The present study aimed to examine the relationship between patterns of eating alone and the risk of MetS in Korean adults. We hypothesized that the patterns of eating alone are differentially associated with the components of MetS in Korean adults.

Data from the Korea National Health and Nutrition Examination Survey (KNHANES) for 2013–2015 were used for this study. KNHANES is an ongoing cross-sectional survey designed using complex, stratified, multistage, and probability cluster sampling to obtain nationally representative estimates. A total of 22,948 study participants completed the KNHANES 2013–2015 survey. Exclusion criteria for the study included those participants under 19 or 65 years or older (n = 9423), pregnant or lactating women (n = 237), those with daily energy intakes below 500 kcal and over 5000 kcal (n = 222), and those with missing responses on daily energy intake (n = 1724). We also excluded study participants with missing responses about socio-demographic characteristics (n = 1640), health-related behaviors such as smoking status and physical activity (n = 94), meal companionship (n = 45), components of MetS measurements (n = 568), and BMI (n = 7). The final analytic sample consists of 8988 participants (3624 men and 5364 women).
Determining a respondent’s meal companion during the last year was assessed using the question: “During the last year, did you usually eat breakfast with others?” If participants answered “no”, they were classified as “eating alone”. The “breakfast” meal occasion question was replaced with lunch or dinner.
A total of eight categories were created based on the total frequency of eating alone on a daily basis in the past one year: (1) three times for breakfast, lunch, and dinner; (2) two times for breakfast and dinner; (3) two times for lunch and dinner; (4) two times for breakfast and lunch; (5) once for breakfast only; (6) once for lunch only; (7) once for dinner only; and (8) zero times eating alone.
The presence of MetS has been defined by the National Cholesterol Education Program Adult Treatment Panel III (NCEP ATP III) [23] and International Diabetes Federation (IDF) [24]. Individuals with three or more of the following risk factors were defined as having MetS: (1) abdominal obesity (waist circumference ≥ 90 cm for men and ≥ 80 cm for women; (2) elevated triglycerides (TG) (fasting TG ≥ 150 mg/dL), or individuals who had taken medications for dyslipidemia or had a diagnosis of dyslipidemia from a physician; (3) low high-density lipoprotein cholesterol (HDL-C) levels (fasting HDL-C < 40 mg/dL for men and < 50 mg/dL for women); (4) elevated fasting blood glucose (FBG) levels (FBG ≥ 100 mg/dL), or individuals who had taken medication for high blood glucose or had a diagnosis of diabetes from a physician; and (5) elevated blood pressure (BP) (systolic BP (SBP) ≥ 130 mmHg or diastolic BP (DBP) ≥ 85 mmHg), or individuals who had taken medication for high BP (HBP) or had a diagnosis of HBP from a physician.
Sociodemographic characteristics were considered, such as age (in years, continuous), education (below or equivalent to elementary school graduates, middle school graduates, high school graduates or college graduates and above), marital status (married or unmarried), income (lower, lower middle, upper middle, or highest), number of family members in a household (1, 2, 3, 4, 5, or ≥ 6 members), and household type (single person, married couples without children, other (one generation), married couples with children, single parent with children, other (two generations), or more than three generations), along with health-related behaviors such as smoking status (nonsmoker, former smoker, current smoker) and physical activity (yes or no; yes to vigorous intensity activities for at least 75 min/week, or moderate intensity activities for at least 150 min/week, or an equivalent combination of moderate and vigorous intensity activity during a typical week).
Distribution of sociodemographic and lifestyle factors by sex were assessed by the frequency and weighted percentages. Distribution of sociodemographic and lifestyle characteristics based on the eight patterns of eating alone were computed and tested by Chi-square analyses. Mean and standard errors of anthropometric and biomarkers of MetS were calculated and then compared across the different patterns of eating alone by sex. Post-hoc Bonferroni tests were conducted to detect significant differences between each group. Adjusted odds ratios (AOR) and 95% confidence intervals (CI) were calculated to separately examine the association between the patterns of eating alone and the risk of MetS and its five components in men and women, after controlling for confounding variables. Lastly, the prevalence of MetS was calculated in the overall population stratified by different age groups (19–39 vs. 40–64 years) and sex (men vs. women). Sample weights, strata, and primary sampling units were applied to account for the complex survey design, survey non-response, and post-stratification design [25]. A two-tailed p value (< 0.05) was considered statistically significant. All statistical analyses were performed using SAS (version 9.4; SAS Institute, Inc., Cary, NC, USA).

Our study findings highlight that the patterns of eating alone are differentially associated with sociodemographic and lifestyle factors, and the risk of MetS with sex differences in Korean men and women. Men who had dinner alone or breakfast and dinner alone had an increased risk of MetS after adjusting for age, income, occupation, number of family members in a household, generation type, marital status, smoking status, and physical activity. Women who had breakfast alone had a decreased risk of MetS after controlling for covariates. Future studies are warranted to identify distinct dietary patterns across the different types of eating alone in relation to various health outcomes in the Korean adult population.

This work was supported by the Ministry of Education of the Republic of Korea and the National Research Foundation of Korea (NRF-2016S1A3A2924243). 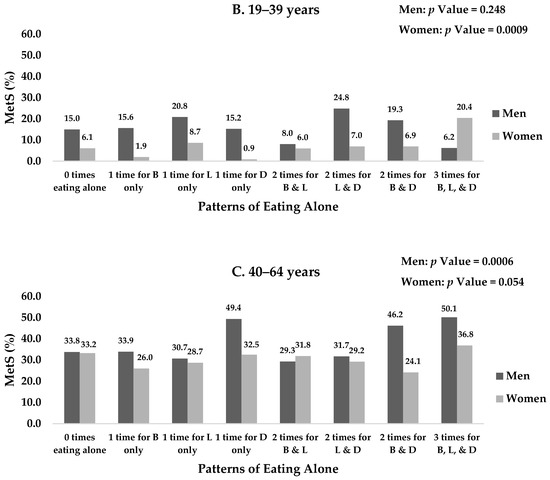