Migraine is the most prevalent and incapacitating neurovascular disorder worldwide, affecting approximately one billion people, exerting a considerable impact on quality of life, and representing a significant socioeconomic burden [1,2,3]. Speculated origins of pain are cortical neuronal hyperexcitability [4], modulatory dysfunction of brainstem and diencephalic systems [5], and peripheral activation [6], all of which lead to the release of vasoactive neuropeptides in the trigeminovascular system to process pain [7,8].
Although many hypotheses regarding migraine triggers have been proposed, the significance of causal relationships between the triggers is obscured [9,10]. Among these triggers, cervical pathologies may initiate the sequence of events that results in migraine symptoms. The extensive functional convergence of upper cervical spinal cord from the descending fibers in the trigeminal nucleus caudalis, which terminates within the trigeminocervical nucleus, and the afferent fibers from the upper cervical roots, which communicate in this region, accounting for the bi-directional pathway of pain between the neck and head. This interaction refers the cervical pathologies to the head, which is the activity also proposed to cause cervicogenic headache [11]. Constantly noxious cervical afferent irritation via this pathway is a possible key element in causing migraines.
Neck pain and muscle tension are common migraine symptoms and both could be sequelae of neck injuries, according to the musculoskeletal anatomy [11,12]. Moreover, administering multiple injections in targeted head and neck regions is sometimes considered important for the management of migraines, cervicogenic headaches, and myofascial referred pain [11,13,14,15,16], indicating that headache and neck pain may share some common pathways.
Although a previous report indicated that cervical spondylosis (CS) accounts for 15.9% of migraineurs [17], until now epidemiological evidence of a link between CS and the risk of migraine is minimal. Therefore, we conducted this nationwide retrospective cohort study to investigate the longitudinal causal relationship between CS and migraines and CS severity in relation to the risk of developing a migraine.

The data used in this retrospective study was retrieved from the Longitudinal Health Insurance Database 2000 (LHID2000) of Taiwan, a subdataset of the National Health Insurance Research Database (NHIRD) that comprises 1,000,000 randomly selected people from the NHIRD. The NHIRD of Taiwan contains the detailed health care data of more than 99% of the Taiwanese population (more than 23.74 million residents) [18]. The LHID2000 has been successfully applied in numerous studies [19,20]. The diagnostic coding in our study was according to the Ninth Revision ICD-9-CM (the International Classification of Diseases-Clinical Modification). Our study was approved by the IRB (Institutional Review Board) in China Medical University (CMUH104-REC2-115-CR2). Because the patients’ personal information is anonymous without identification numbers, therefore the informed consent was not required. The dataset is belonging to the Taiwan Ministry of Health and Welfare (MOHW)

We selected individuals aged ≥18 years diagnosed with CS without (ICD-9-CM code 721.0) or with (ICD-9-CM code 721.1) myelopathy from 2000 to 2010 as the CS cohort. The diagnosis time of the CS cohort was defined to be the index date. We randomly selected the non-CS cohort (the control subjects) at a 4:1 ratio from the database to match with the CS cohort. Participants in both of the cohorts with previous migraine diagnoses (ICD-9-CM code 346) were excluded. The medical fraud by overbilling for health care or cheating charges based on incorrect diagnoses were avoided carefully, and the NHI Bureau in Taiwan monitored the disease coding strictly. As aforementioned, highly prevention from the coding errors, misdiagnosis, or improper therapy supported the reliability of NHIRD data to explore the risk of migraine in CS patients. Moreover, the diagnosis of migraine based on the International Classification of Headache Disorders (ICHD-3) criteria (the 3rd edition) was only made by the professional neurologists in Taiwan, which increased the confidence of the accuracy [21]. Regarding the diagnosis of CS with myelopathy, it required a careful correlation between findings from the nature history and clinical examination, supported by radiological evidence showing spinal cord compression. Furthermore, the NHI regulated the coding and audited insurance reimbursement claims routinely.

We used Chi-square tests and Student’s t tests to compare sex, age, and comorbidities between the CS and non-CS cohorts. Cumulative incidences of migraines in both of the cohorts were compared using the Kaplan-Meier method and variations between the two cohorts were compared using a log-rank test. We calculated the incidence rate of migraines based on various risk factors and stratified the results based on sex, age, and comorbidities. We used Cox proportional hazard regression models to measure the hazard ratios (HRs) and 95% confidence intervals (CIs) to assess the risk of migraine after adjustments for age, sex, and the related comorbidities. In addition, the relative risk of migraine development stratified based on sex, age, and comorbidities in both of the cohorts was analyzed for comparison. These above statistical measurements were analyzed based on SAS (version 9.4 for Windows, SAS Institute, Cary, NC, USA).

CS increases the risk of migraine, especially in individuals with cervical spondylotic myelopathy. We showed that young to middle-aged women with CS and comorbidities were at the highest risk of migraine. Although the precise underlying mechanisms of this longitudinal association remain unknown, our results indicated that these two entities are closely related. However, in daily clinical practice, this truth will not come to light, multimodal management of migraine is highly required by the clinical practitioners.

This work was supported by grants from the Ministry of Health and Welfare, Taiwan (MOHW107-TDU-B-212-123004), China Medical University Hospital; Academia Sinica Stroke Biosignature Project (BM10701010021); MOST Clinical Trial Consortium for Stroke (MOST 106-2321-B-039-005-); Tseng-Lien Lin Foundation, Taichung, Taiwan; and Katsuzo and Kiyo Aoshima Memorial Funds, Japan. The funders had no role in study design, data collection and analysis, decision to publish, or preparation of the manuscript. No additional external funding received for this study. 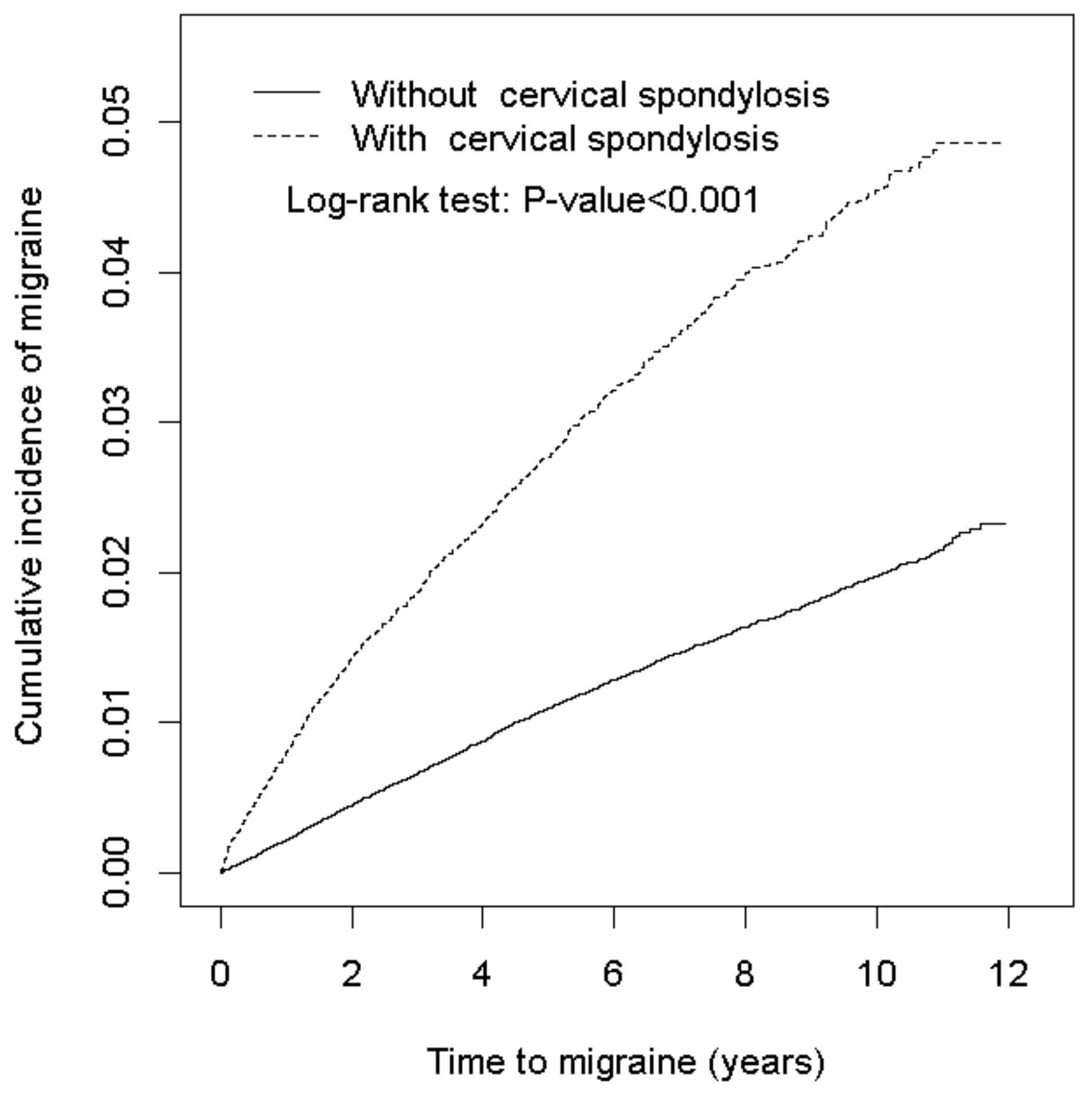