The ubiquitous surfactants nonylphenol (NP) and its ethoxylates (NPEOs), which are known as endocrine disrupters, have appeared in the lists of restricted chemical substances, monitoring programs, and environmental quality standards of many countries due to their adverse effects. Recent studies have reported alarming levels of NP, as the final metabolite of NPEOs, in Vietnamese urban waters, whilst response to this issue is negligible. With the aim of addressing how the public perceives and expects to avoid the risk of endocrine disrupting surfactants (EDSs), the study tested the hypothesized roles of specific knowledge, general knowledge, and perceived uncertainty using structural equation modelling. The findings revealed that different types of knowledge played certain roles in explaining risk perception, risk acceptability, and self-protective response, which are distinguished by experience amongst the public. Evidence of the mediating role that perceived uncertainty may play in the decrease of risk perception and the increase of risk unacceptance has been provided. The insights gained from the study may help answer why the public are in favor of taking non-diet-related self-protective measures rather than changing their dietary habits, which illustrates a comparison with the basis of health belief model. The needs for building cognitive capacity amongst the public, particularly pregnant women and young mothers, and risk communication concerning endocrine disrupting contamination linked to reproductive health are highlighted. View Full-Text
Keywords: risk perception; risk acceptability; self-protective response; knowledge; perceived uncertainty; endocrine disrupting surfactants (EDSs); health behavior risk perception; risk acceptability; self-protective response; knowledge; perceived uncertainty; endocrine disrupting surfactants (EDSs); health behavior
►▼ Show Figures 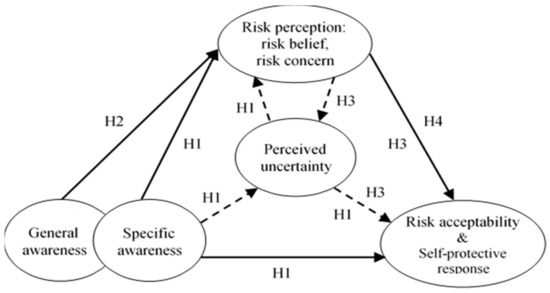