Stunting has been associated with long term physical and cognitive deficits in children, and health and economic disadvantages in later life [1]. In 2012, the World Health Assembly set a target of a 16% prevalence rate for stunting by 2025, a 40% reduction in the number of children stunted. This target has since been adopted as a Sustainable Development Goal [2]. Reaching this goal will require investment in child nutrition and prevention of infectious disease [3]. We argue, however, that outdoor (or ambient) air pollution is an additional important risk factor for stunting, and that reducing exposure to air pollution could have a significant impact on the prevalence of stunting.
Indoor air pollution from the burning of biomass for cooking has already been recognized as an important risk factor for child stunting [4]. Ambient air pollution has been rising in developing countries, and this can have a significant impact on human health [5]. In particular, it can affect the health of children [6,7] through inhalation, but also, more importantly, transplacental transmission in utero. There is substantial evidence of large effects of ambient air pollution on the birth weight of children, both in developed and developing countries [8,9,10]. Low birth weight is, in turn, linked to stunting in children; not all of the initial deficit is made up after birth [4,11,12]. We therefore suspect that ambient air pollution may be an important factor in explaining child stunting in developing countries.
Though Bangladesh has seen an improvement in child stunting—the prevalence of stunting in children under age 5 has reduced from about 70% in the 1980s to about 40% in 2014 [13]—it still remains well above the Sustainable Development Goal target of 16%. We focus on Bangladesh because it ranked last globally on air quality in the 2016 Environmental Performance Index [14]. Among various pollutants, particulate matter of median aerodynamic diameter of 2.5 µm or less (fine particulate matter, or PM2.5) is thought to have the most consistent and harmful effect on health [15]. The geometric mean annual PM2.5 concentration in Bangladesh increased from 33.8 µg/m3 in 1998 to 53.5 µg/m3 in 2014, exposing a population of about 160 million to ambient PM2.5 concentrations far exceeding the World Health Organization (WHO) guideline of 10 µg/m3 [16]. The primary sources of ambient air pollution in Bangladesh include industries, especially brick factories, and motorized road transport [17,18].
Although household air pollution is a more immediate threat due to the harm from burning of solid (biomass) cooking fuel in developing countries [19], ambient air pollution is likely to become a more severe risk in the future because of increasing urban air pollution [20].
We focus on the effect of ambient air pollution on child stunting, though air pollution has much wider health effects [21]. As children are highly susceptible to air pollution [22], air pollution has been linked to child mortality and respiratory infections as well [6,23]. A systematic review of 74 studies found an effect of ambient PM2.5 on acute lower respiratory infection (ALRI), though most studies were conducted in North America and Europe, which have much lower levels of exposure [15]. Estimation of the global burden imposed by air pollution on health is usually modeled using concentration-response curves (CRCs) that are extrapolated from studies conducted in settings with low levels of pollution [24]. Goldizen, Sly and Knibbs [6] have emphasized the need for further research on the effects on child heath in regions with higher levels of pollution.
The objective of this study is to directly estimate the relationship between exposure to ambient PM2.5 in utero and child stunting in Bangladesh. The study makes several contributions to the field. First, it provides evidence on the effect on child health over a higher range of ambient annual PM2.5 concentration levels (20–73 µg/m3) than seen in many existing studies. Second, it estimates the effect of air pollution on child stunting, rather than birth weight. This is important for understanding how controlling air pollution can contribute to the sustainable development goal of reducing child stunting.

The results of the regression are presented in Table 2. The reference group for the analysis is children with exposure in the lowest quartile, with ambient concentrations of PM2.5 less than 40.3 µg/m3 while in utero. The results in column 2 of Table 2 indicate that children exposed to higher levels of ambient air pollution are more likely to be stunted. Children in the second quartile of exposure, at levels in the range 40.3–45.8 µg/m3 have a relative risk of stunting of 1.074 (95% confidence interval: 1.014–1.138). The third quartile of exposure has a higher relative risk of stunting of 1.150 (95% confidence interval: 1.069–1.237), and the fourth quartile has a similarly high risk of stunting. The leveling-off of the effect between the third and fourth quartiles, which divide at a level of 52.0 µg/m3, is consistent with the Lin50 model, which has linear effects up to 50.0 µg/m3 and is flat thereafter.
The results for our covariates are in line with previous studies. The risk of stunting is lower for children with highly educated parents and in households in higher wealth quintiles. Stunting is more likely if the mother is very young, and has low stature or BMI. First births, a short birth interval, and diarrhea are also associated with an increased risk of stunting. Cooking with biomass or solid fuel, which is linking to indoor air pollution, has a somewhat elevated the risk of stunting, but the effect is not statistically significant. This finding is similar to the findings on the effect of cooking with solid fuel on child mortality in previous studies on Bangladesh [44].
Figure 3 shows the adjusted relative risk of stunting by quartile of in utero PM2.5 exposure. The results for wasting and underweight are similar to those that are found for stunting, with significantly higher relative risk of poor anthropometric outcome with increasing in utero exposure to ambient air pollution, but with some evidence of a leveling-off of the effect between the third and fourth quartiles. For small birth size, we find higher point estimates of relative risk as the pollution level increases, but the 95% confidence intervals always include 1, and, thus, it is unclear whether the results are different from no effect. However, this may be due to subjectivity and measurement error produced in the variable due to self-reporting.

The results indicate that children exposed to a higher level of ambient PM2.5 in utero are at higher risk of anthropometric failure, even after accounting for various confounding characteristics. The findings are particularly important given the increase in PM2.5 levels since 1999. The increase in mean PM2.5 level in birth year in the sample (from 34.50 µg/m3 in 1999 to 51.06 µg/m3 in 2014) is equivalent to a shift from the lowest quartile of exposure to the third quartile, and can be associated with an increase in relative risk of stunting by 1.150. Our results imply that if ambient fine particulate pollution had been in the lowest quartile (19.6–40.2 µg/m3) for all of Bangladesh, then the stunting prevalence in 2014 would have been 27.3% instead of 30%. Decreasing ambient PM2.5 levels to the WHO guideline of 10 µg/m3 might bring even larger gains in terms of reduced child stunting; however, the lowest recorded exposure level in our sample is 19.6 µg/m3 and the effects of lowering exposure levels to below the WHO guideline would require extrapolation of our results out of sample. Nevertheless, our findings suggest that rising levels of ambient air pollution in Bangladesh have slowed the improvement in child development and that reducing these high levels of pollution could contribute to better child health.
Our results complement studies that find an effect of indoor air pollution due to cooking with biomass. Mishra and Retherford [45] have found that the prevalence of severe stunting was higher among children from households using biofuel for cooking. A more recent study by Kyu, et al. [46], using a seven country DHS data between 2005 and 2007, has estimated that biofuel smoke, of which PM2.5 is a major constituent, from household cooking was associated with stunting.
Our study has several limitations. Exposure to other forms of ambient air pollution may be important [47]. Jedrychowski, et al. [48] found an effect of variation in sulphur dioxide (SO2) and suspended particulate matter (SPM) on child height in Krakow, Poland. Bobak, et al. [49] observed that the height of children was negatively associated with air pollution from coal burning in Britain in 1946. However, we lack satisfactory data on these other forms of pollution in Bangladesh. The exposure of this study, ambient PM2.5 level may have been subject to measurement error due to the limited ground-based monitoring of air pollution in South Asia for calibration of the satellite data to ground level exposure [16]. In addition, diurnal and seasonal variability in PM2.5 level in utero might be relevant for child health; however, information on diurnal or seasonal variability of ambient PM2.5 was not available in the data used for this study.
Although we control for the use of biomass fuel for cooking—typically, the main source of household air pollution in developing countries—data on the actual PM2.5 level inside the residence from household monitors would have provided a more accurate estimate [50]. Also, our data suffers from missing observations: around 20% of our observations are lost due to missing outcome or covariate data for regression on child stunting, wasting, and underweight. We assume that these observations are missing at random; if not, there may be a selection bias in our estimates. Child size at birth was not asked in the first two survey waves, which gives us a much smaller sample size for this regression. In any case, direct measures of child weight at birth would be preferable to these subjective self-reported data by mothers. In addition, we match children to exposure in utero based on their residence at the time of the survey, which will mean that our exposure measures are inappropriate for children who moved in from other areas.
Limitations notwithstanding, with its choice of DHS data for child health and high spatial resolution PM2.5 data for ambient air pollution, this study was based on a pooled cross-section of four nationally representative waves, over a long time-period, and a wide range of ambient PM2.5 concentration levels. Further, it controlled for common child, parental, household, and environmental characteristics, and it incorporated district dummies and survey year fixed effects to account for spatial and temporal variations in unobserved factors.

The purpose of this study was to estimate the relationship between ambient PM2.5 and child stunting in Bangladesh. The results showed that exposure to a high level of PM2.5 in utero is associated with an increase in the relative risk of stunting, wasting, and underweight. In our sample, in 2014, 30% of the children under age 5 in Bangladesh were stunted. Given that over 10 million children were born in Bangladesh over the last five years [51], our estimates imply that reducing ambient air pollution in all of Bangladesh to levels seen in the lowest quartile of exposure would have reduced the number of children who were stunted by as much as 270,000.

We thank Scott Randall for sharing expertise on ambient air pollution in Bangladesh and three anonymous reviewers for their comments on a draft of this manuscript. 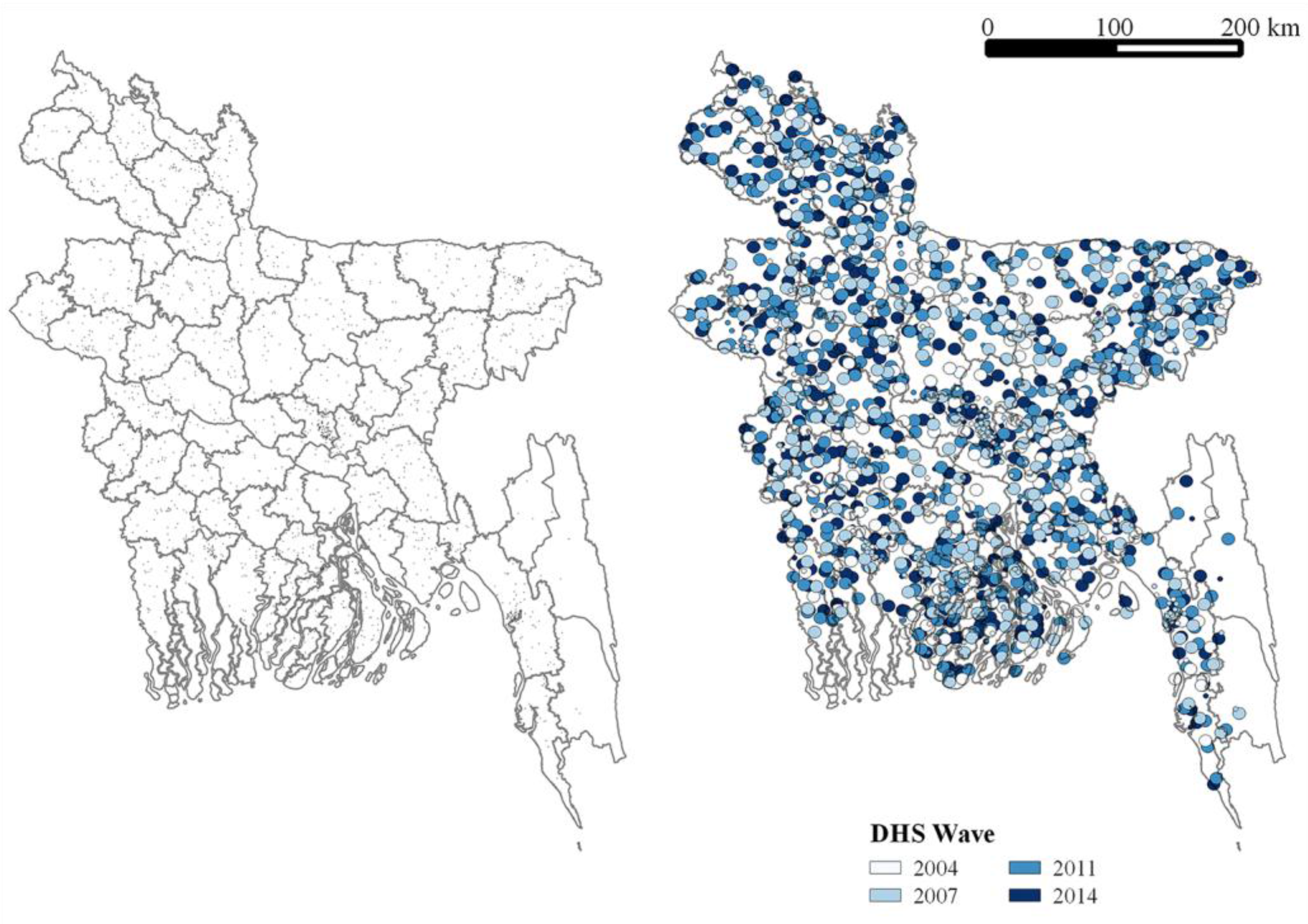 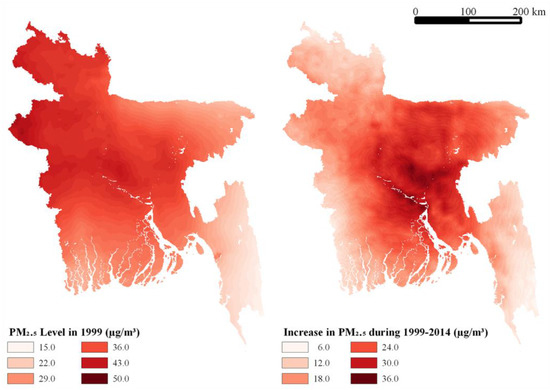 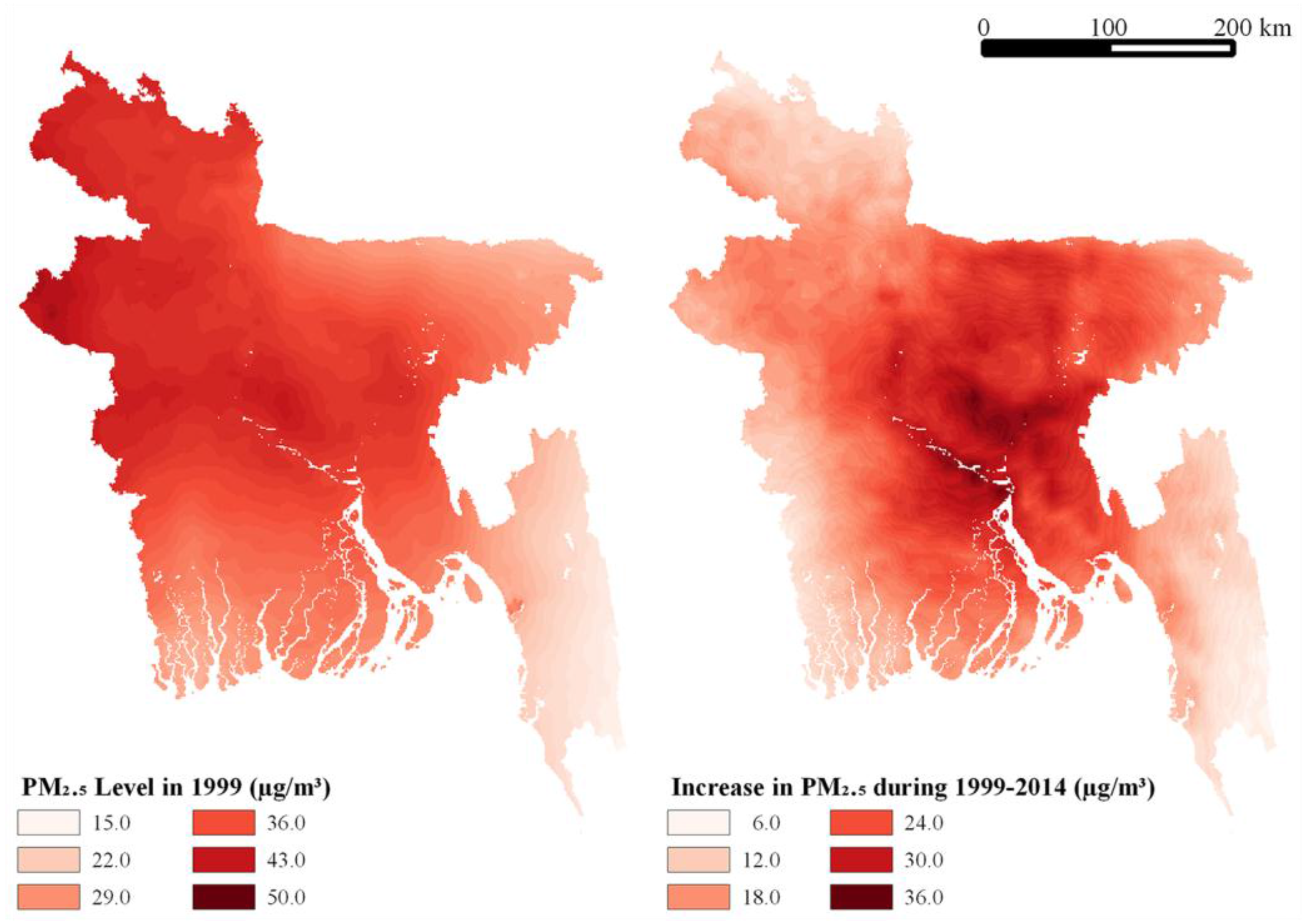