Socioeconomic Inequalities in the Use of Healthcare Services: Comparison between the Roma and General Populations in Spain
Next Article in Special Issue

Do Authoritarian Governments Respond to Public Opinion on the Environment? Evidence from China
Previous Article in Journal

Figure 1 presents the framework of the study approach, which includes data collection, traffic simulation, emission modeling, and results analysis.
First, in the data collection, an infrastructure data set and a traffic data set were collected at a real-world intersection through a field survey. These data were used to establish the simulation platform. A vehicle operations data set and an emission data set were selected using the MapInfo from an existing vehicle emission database for calculating emission rates.
Second, in the traffic simulation, a simulation platform was developed using VISSIM. The model was calibrated and validated using the collected data. Moreover, the model was validated by comparing the observed and simulated VSP distributions. The VSP distributions were calculated using the emission model. Subsequently, a cooperative vehicle-infrastructure control strategy was implemented using the COM external program interface in VISSIM. With the control strategy, the guidance information could be provided to vehicles. Scenarios were designed and simulated. After running the traffic simulation, the simulated data under different compliance rates were obtained.
Third, the emission model was developed. Based on the simulation data and the emission rates, the VSP distributions, emission factors, and total emissions were estimated for different compliance rates.
Finally, a comparative analysis was conducted based on the calculation results to quantify the effects of drivers’ compliance rates on emissions at the signalized intersection equipped with the cooperative vehicle-infrastructure system.

A signalized intersection of Fuchengmen Avenue and Xisi Avenue in Beijing was selected as the test bed to develop a simulation model in this research. At this intersection, geometry, signal, and traffic flow data have been collected. Geometry data include the size of the intersection and the lanes of each approaching direction. As shown in Figure 2a, each approaching direction comprises three lanes, which are a left-turn lane, through lane, and right-turn lane. The existing signal phases have been investigated. Through the field survey, there was four-phase at the signalized intersection. In the south-north direction and the east-west direction, the durations of straight and left-turn green light phase were 38 s and 18 s, respectively. The durations of amber signal light were 2 s. The cycle length is 120 s. The actual signal phases were all used to develop the simulation platform. Figure 2b presents the existing signal phases. Traffic data include the type of vehicles and traffic volumes. These data were collected through a field survey. Some data were collected using camera, such as the existing signal phases.
Two types of vehicles run through the intersection: light duty vehicles and buses. Light duty vehicles are defined as cars with the gross vehicle weight ratings less than 8500 lbs. Light duty vehicles were selected for implementing the cooperative vehicle-infrastructure control. The vehicles randomly arrive at the signalized intersection. There is no platooning of vehicles with coordinated signals. The capabilities behind harmonic speed profiling with connected vehicle systems are enough.

The simulation model was calibrated using an approach based on genetic algorithms to find optimal parameter combination so that the model could accurately present the actual running states of the vehicles. Driving behavior parameters in VISSIM that are sensitive to the traffic volume and speed are calibrated, such as maximum look ahead distance, the number of observed vehicles, average standstill distance, additive part of safety distance, and waiting time before diffusion. Each parameter was divided into four levels. After using the Genetic Algorithm, the optimal parameter combination could be found. [18]. After the calibration, the simulation model was further validated by comparing the observed data obtained from similar intersections in the vehicle emission database and simulated output files, to evaluate its reliability and to ensure that it could precisely estimate the emissions at the signalized intersection. Ten simulation runs were conducted with ten random number seeds. Observed and simulated VSP distributions are compared in Figure 3, indicating little difference between the observed and simulated VSP distributions. CO2, NOx, HC, and CO emissions were estimated using observed and simulated data. All of the mean absolute percentage errors were found to be within 10%, signifying that the simulation model was suitable for estimating the emissions.

The COM interface in VISSIM was used to implement the algorithm of the cooperative vehicle-infrastructure control. In this algorithm, drivers are guided with speed advice at the intersection. Restricted by regular routes and stations, buses are not provided with speed advice. Therefore, the cooperative vehicle-infrastructure system works only for light duty vehicles. When light duty vehicles enter the influencing area (a circle of radius 150 m), their instantaneous locations and speeds are sent to the control center. According to the real-time signal status, the control center determines the guidance speed and provides advice to the vehicles [12]. The guidance advice was proposed to make the vehicle pass through the intersection in the present green light phase or the next green light phase as much as possible. The comparison of the real-time speed of vehicle and a series of threshold velocities was conducted to determine the guidance strategies. Figure 4 presents the guidance process.
It should be noted that:
where is the earliest time at which vehicle A can arrive at the stop line, is the actual time at which leading vehicle B arrives at the stop line, and is the minimum headway (2 s).

A VSP-based approach is employed to estimate emissions. The steps for emissions estimations are as follows.

As one of the parameters closely related to vehicle operating conditions, the VSP indicates the ratio of the vehicle’s output power over its mass. The VSP establishes an informative relationship between traffic emissions and driving activities, so the VSP-based model is a current trend of the emission models. MOVES, one of the VSP-based models, is a novel emissions model developed by EPA which can be used to calculate the emission factors of vehicles accurately. Based on the instantaneous speed and acceleration obtained from simulation, the VSP values for light duty vehicles and buses were calculated using Equation (2) [19]: where v is the instantaneous speed in m/s, and a is the acceleration in m/s2. For light duty vehicles, A = 0.156461, B = 0.002002, C = 0.000493, and m = 1.4788. For buses, A = 0.746718, B = 0, C = 0.002176, and m= 9.06989.
VSP values were divided into VSP bins using the hierarchical clustering method, as presented in Equation (3). In this equation, the VSP data are arranged in 1 kW/ton intervals [20]: where, n is the integer from −20 to 20 for light duty vehicles and from −15 to 15 for buses.

Based on the simulation platform and the emission model, the VSP distributions, emission factors, and total emissions under different compliance rates were calculated using the instantaneous speed and acceleration obtained from simulation. A comparative analysis was conducted to quantitatively evaluate the effects of drivers’ compliance behaviors on emissions at the studied intersection.

To demonstrate the environmental benefits more intuitively, total emissions in the southbound approach of the intersection were estimated using Equation (5). Traffic volumes were collected at the signalized intersection of Fuchengmen Avenue and Xisi Avenue through the field survey. The volumes of light duty vehicles and buses through the approach were 429 pc/h (passenger car per hour) and 9 vehicles/h, respectively. The total vehicles emissions per hour were estimated for compliance rates of 0, 0.3, and 0.7 (Table 2). In addition, the reduction percentages of emissions under the compliance rates of 0.3 and 0.7, compared to compliance rate of 0, were calculated. Figure 8 shows higher total emission reduction were observed with higher compliance rate for all CO2, NOx, HC, and CO emissions. Among the four emission types, CO2 was reduced most significantly. Specifically, CO2 emissions were observed to decrease by 16% and 22% under compliance rates of 0.3 and 0.7, respectively.

This study investigated the effects of drivers’ compliance rates on emissions at a signalized intersection equipped with a cooperative vehicle-infrastructure system. A VISSIM-based simulation model of a signalized intersection was developed. Based on the simulation results under different compliance rates of light duty vehicles, the VSP distributions, emission factors, and total emissions were estimated. The effects of different compliance rates on emissions were analyzed by comparing the estimation results. The main findings are summarized as follows:
The findings of this study provide insights for transportation practitioners to implement emission reduction policies in cities and promote environmental sustainability. In the future, the analyses could be conducted at other types of signalized intersection using different signal phases or groups of intersections with cooperative vehicle-infrastructure systems. New studies on providing guidance strategies for buses and the vehicles platoons in cooperative vehicle-infrastructure systems will be conducted. 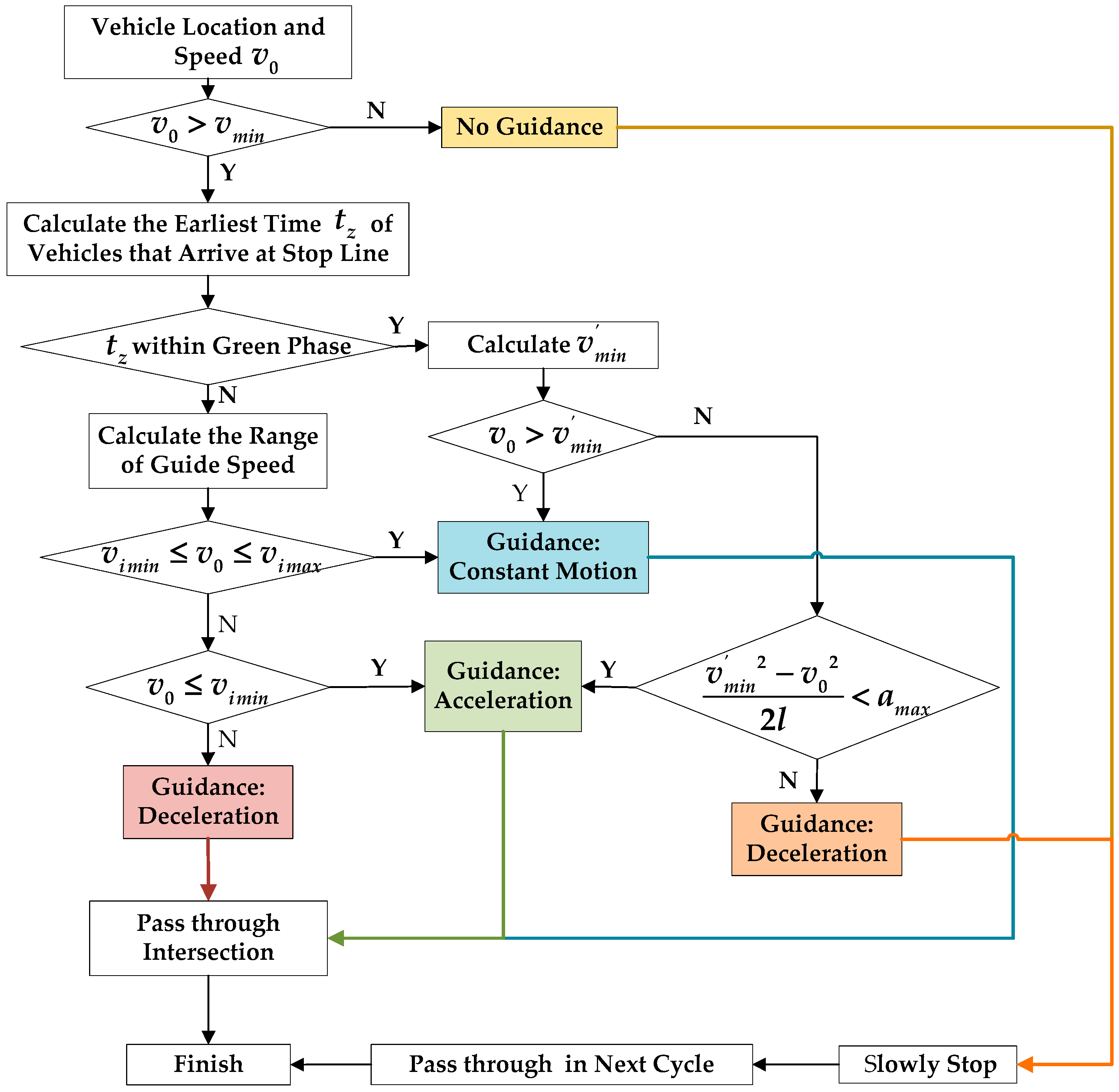