Unintentional Child and Adolescent Drowning Mortality from 2000 to 2013 in 21 Countries: Analysis of the WHO Mortality Database

Limited research considers change over time for drowning mortality among individuals under 20 years of age, or the sub-cause (method) of those drownings. We assessed changes in under-20 drowning mortality from 2000 to 2013 among 21 countries. Age-standardized drowning mortality data were obtained through the World Health Organization (WHO) Mortality Database. Twenty of the 21 included countries experienced a reduction in under-20 drowning mortality rate between 2000 and 2013, with decreases ranging from −80 to −13%. Detailed analysis by drowning method presented large variations in the cause of drowning across countries. Data were missing due to unspecified methods in some countries but, when known, drowning in natural bodies of water was the primary cause of child and adolescent drowning in Poland (56–92%), Cuba (53–81%), Venezuela (43–56%), and Japan (39–60%), while drowning in swimming pools and bathtubs was common in the United States (26–37%) and Japan (28–39%), respectively. We recommend efforts to raise the quality of drowning death reporting systems and discuss prevention strategies that may reduce child and adolescent drowning risk, both in individual countries and globally.
Keywords: drowning; child; mortality; trend drowning; child; mortality; trend

Children and adolescents are vulnerable for drowning because they are mobile, curious, and like to explore their environment [1], and also because they lack adult levels of risk consciousness and water-safety knowledge [2]. According to the latest Global Burden of Disease (GBD) estimates, 127,577 children and youth under the age of 20 years died from drowning in 2015 in the world, constituting over 39.4% of all-age drowning deaths [3].
Assessment of the epidemiological characteristics and monitoring of trends in drowning at the national level is critical to understand the mechanisms of drowning and develop feasible solutions to reduce risk. However, only a few studies report recent child drowning mortality at the national level for multiple countries. GBD 2015 estimates are helpful to the field, as they provide national estimates of child and adolescent drowning rates for 195 countries, and subnational estimate for seven large countries [4]. GBD data are, however, limited in their scope. They combine all methods of drowning into a single category and thus do not offer data concerning the frequency of drowning from different methods or causes.
Existing research has quantified some aspects of drowning rates around the world. Huang et al. [5], for example, used GBD 2013 data and reported large decreases in global under-5 years of age drowning mortality between 1990 and 2013, including a greater drop in drowning mortality in developing countries compared to developed countries. Other reports have focused on changes in drowning rates in single countries or regions, such as manuscripts by Dai et al. in Georgia [6]; Anary et al. in Mazandaran Province, Iran [7]; Tyebally and Ang in Singapore [8]; and Ahlm et al. in Sweden [9]. A few studies have extended broad information on drowning rates to examine rates by method and cause. One recent paper, for example, used the combined mortality data for the latest available three years (2004–2011) in the WHO Health Statistics and Information Services to examine differences in unintentional drowning mortality by age and body of water across 60 countries, revealing huge variations in age-adjusted mortality rate, from 0.12 in Turkey to 9.19 per 100,000 persons in Guyana; the authors ascribed the large country variations to be resulting from differences in coding practice for drownings [10]. A report in the mid-1990s by the Wet International Collaborative Effort (ICE) Collaborative group revealed great variations in reported drowning with undetermined intent across countries [11]. Almost 40% of drowning deaths in England and Wales were coded as having undetermined intent, for example, but only 5% in the United States and New Zealand and 1% in Israel were coded as having undetermined intent. Unfortunately, no published study has examined this issue using recently released drowning mortality data.
The present study was designed to study these issues in greater detail. We considered three specific research questions: (a) Did the included countries experience similar change in child and adolescent drowning mortality between 2000 and 2013? (b) Did the countries follow the same trends in the method of drowning across the study time period? and (c) Did the countries have the same portion of child and adolescent drowning with unspecified methods, and did the portion change between 2000–2013 for each of the countries?

Drowning mortality data were obtained from the WHO Mortality Database [12], which provides raw death registration data over many years for about 150 countries and regions. Twenty-one eligible countries were included in our study, based on their meeting the following four criteria: (1) death registration system covered ≥70% of the country population; (2) data were available for 10 or more years between 2000 and 2013; (3) ≥100 drowning deaths were reported for people under the age 20 for each year with reported data; and (4) the 10th International Classification of Disease (ICD-10) was used to code deaths for data analysis. Coverage data of death registration systems were from the estimates of the Institute for Health Metrics and Evaluation (IHME) [13,14,15].

The Convention on the Rights of the Child [16] defines children as persons under 18 years of age. The WHO Mortality Database, however, does not provide mortality data for individuals under the age of 18 years as a single group, nor does it provide data for each age in years that could be used to calculate the mortality of an under-18 years age group. Instead, it presents mortality data for the under-20 years age group. Developmentally, 18- and 19-year-olds are similar in terms of their cognitive and social functioning to adolescents who are age 16- and 17-years old [17], so given developmental theory and the availability of data in the WHO database, our analyses focused on the under-20 years age group. We use the term, “child and adolescent” in this manuscript to represent those individuals under 20 years of age.

Three countries had missing data in certain years (Cuba, 2000; Philippines, 2004, 2005, 2012, 2013; Thailand, 2001). In these cases, we imputed the missing data using the methods recommended by the WHO [14]. Specifically, missing values that appeared at the starting or ending years of 2000 or 2013 were extrapolated by replacing them with the mean death rate of the first or last three years. Missing values that appeared in the middle of the time span from 2000 to 2013 were interpolated by replacing them with the mean death rate of all available data in a seven-year window (three years on either side around the year with missing values) [14].
The portion of drowning attributed to unspecified causes (method) was used to measure the specificity of the sub-cause (method) for drowning and the quality of the data available. A large portion of unspecified sub-causes (method) for drowning generally indicates low sub-cause (method) specificity.
We calculated the age-standardized mortality rate from 2000 to 2013 using the direct standardization method. The new WHO world standard population (WHO millennium) was used as the reference population to perform the direct standardization method [19]. Subgroup analyses by age group were not conducted due to insufficient numbers of drowning deaths, which may cause unstable mortality rates. The percent change in rate was calculated as “(mortality in 2013−mortality 2000)/mortality rate in 2000 × 100%”. Pearson chi-square test was used to compare differences in mortality rates between 2000 and 2013.

This study was based on open access data and therefore was exempted from ethics review. This research plan was approved by the Medical Ethics Committee of Central South University (No. XYGW-2016-25).

Twenty of 21 included countries witnessed a moderate or minor decrease in under-20 drowning mortality between 2000 and 2013. We found substantial variations in drowning mortality and mortality change between 2000 and 2013, both between HICs and LMICs, and across countries within those groupings. We recommend more efforts be taken to reduce child drowning globally, and especially in LMICs, with attention paid to the highest risks in each country. For example, non-governmental organizations such as WHO and UNICEF could promote international coordination between developed and developing countries to enhance the drowning prevention capacity in developing countries. We also recommend efforts be taken to improve the quality of drowning death reporting at global and national levels, including completeness, cause specificity, accuracy of cause classification, timeliness, and open access of drowning mortality data. 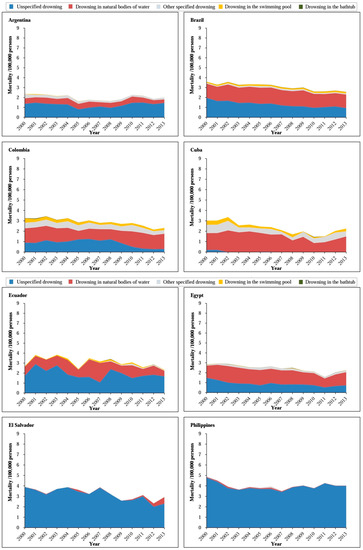 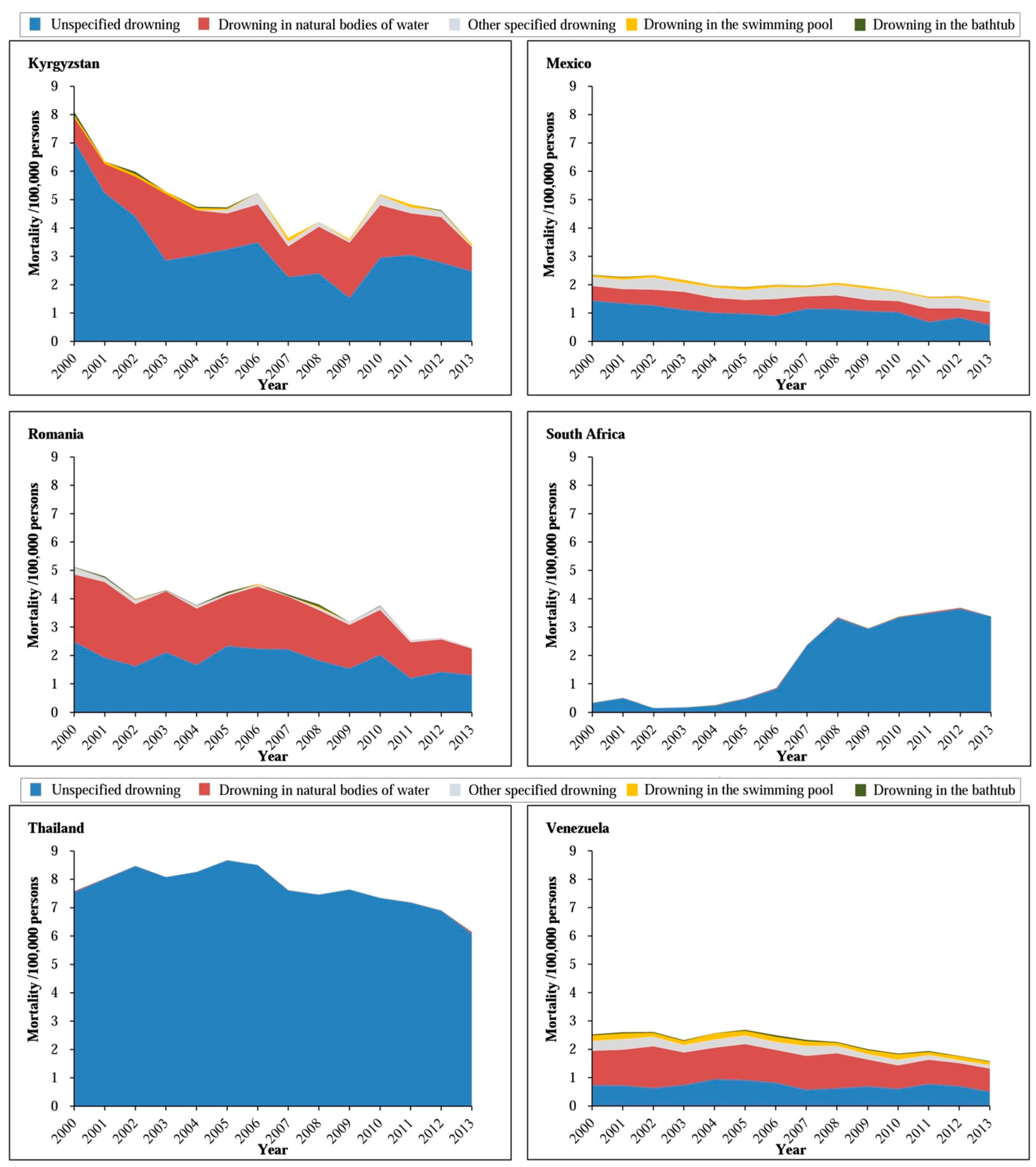 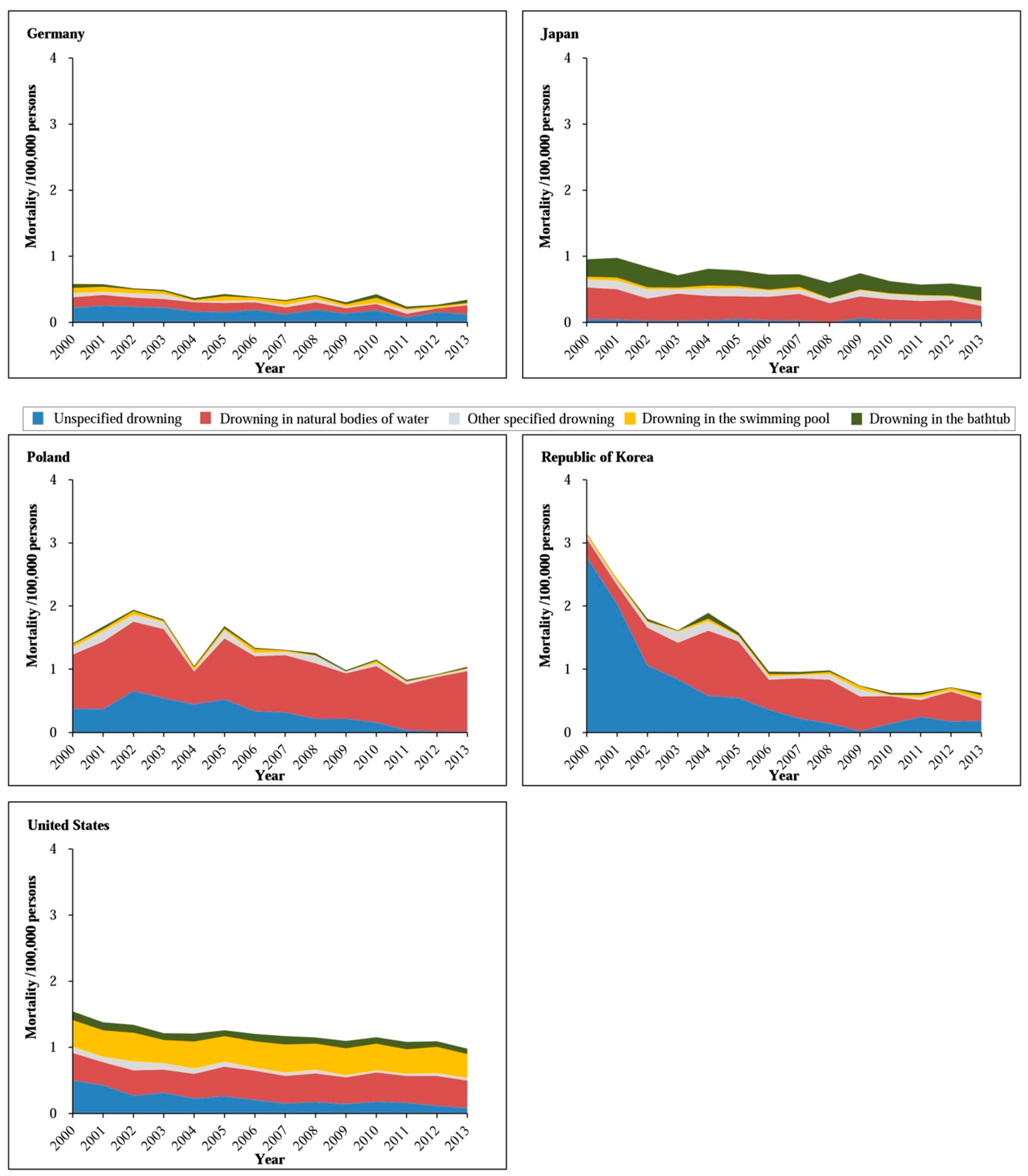 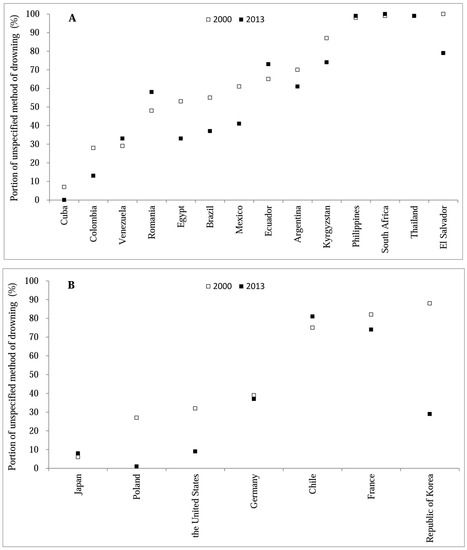