Covariates of Identified Stress and Depression among Seasonal Farmworkers

Intestinal absorption and brain permeation constitute key parameters of toxicokinetics for pesticides, conditioning their toxicity, including neurotoxicity. However, they remain poorly characterized in humans. The present study was therefore designed to evaluate human intestine and brain permeation for a large set of pesticides (n = 338) belonging to various chemical classes, using an in silico graphical BOILED-Egg/SwissADME online method based on lipophilicity and polarity that was initially developed for drugs. A high percentage of the pesticides (81.4%) was predicted to exhibit high intestinal absorption, with a high accuracy (96%), whereas a lower, but substantial, percentage (38.5%) displayed brain permeation. Among the pesticide classes, organochlorines (n = 30) constitute the class with the lowest percentage of intestine-permeant members (40%), whereas that of the organophosphorus compounds (n = 99) has the lowest percentage of brain-permeant chemicals (9%). The predictions of the permeations for the pesticides were additionally shown to be significantly associated with various molecular descriptors well-known to discriminate between permeant and non-permeant drugs. Overall, our in silico data suggest that human exposure to pesticides through the oral way is likely to result in an intake of these dietary contaminants for most of them and brain permeation for some of them, thus supporting the idea that they have toxic effects on human health, including neurotoxic effects. View Full-Text
Keywords: pesticides; toxicokinetics; intestinal absorption; brain permeation; toxicity; in silico method; prediction pesticides; toxicokinetics; intestinal absorption; brain permeation; toxicity; in silico method; prediction
►▼ Show Figures 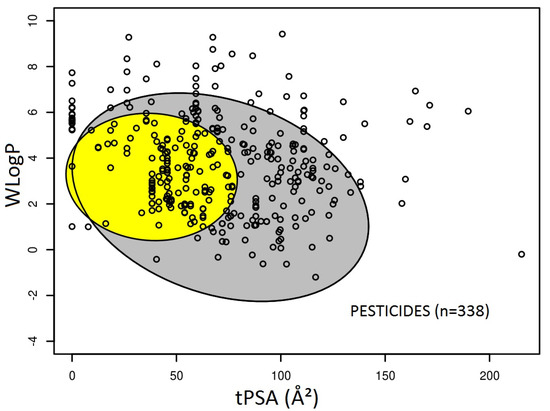