Clinical Prediction of Suicide and Undetermined Death: A Pseudo-Prospective Clinical and Medico-Legal Study of Substance Abusers
Previous Article in Journal

Leishmaniasis is the third most common vector-borne disease and a very important protozoan infection. Cutaneous leishmaniasis is one of the most common types of leishmaniasis infectious diseases with up to 1.2 million occurrences of new cases each year worldwide. A dynamic transmission multivariate time series model was applied to the data to account for overdispersion and evaluate the effects of three environmental layers as well as seasonality in the data. Furthermore, ecological niche modeling was used to study the geographically suitable conditions for cutaneous leishmaniasis using temperature, precipitation and altitude as environmental layers, together with the leishmaniasis presence data. A retrospective analysis of the cutaneous leishmaniasis spatial data in Afghanistan between 2003 and 2009 indicates a steady increase from 2003 to 2007, a small decrease in 2008, and then another increase in 2009. An upward trend and regularly repeating patterns of highs and lows were observed related to the months of the year, which suggests seasonality effect in the data. Two peaks were observed in the disease occurrence—January to March and September to December—which coincide with the cold period. Ecological niche modelling indicates that precipitation has the greatest contribution to the potential distribution of leishmaniasis. View Full-Text
Keywords: ecological niche model; environment; overdispersion; negative binomial; leishmaniasis; infectious disease ecological niche model; environment; overdispersion; negative binomial; leishmaniasis; infectious disease
►▼ Show Figures 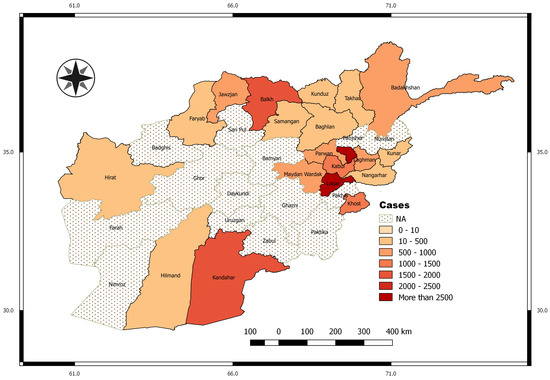