Mount Isa, Queensland, is one of three Australian cities with significant lead emissions due to nonferrous mining and smelting. Unlike the two other cities with lead mines or smelters, Mount Isa currently has no system of annual, systematic, community-wide blood lead level testing; and testing rates among Indigenous children are low. In previous screenings, this group of children has been shown to have higher average blood lead levels than non-Indigenous children. The first aim of this study was to assess whether parents and children would participate in less invasive, rapid point-of-care capillary testing. The second aim was to measure blood lead levels among a range of children that roughly reflected the percentage of the Indigenous/non-Indigenous population. This pilot study is based on a convenience sample of children between the ages of 12 and 83 months who were recruited to participate by staff at a Children and Family Centre. Over three half-days, 30 children were tested using capillary blood samples and the LeadCare II Point-of-Care testing system. Rapid point-of-care capillary testing was well tolerated by the children. Of 30 children tested, 40% (n = 12) had blood lead levels ≥5 µg/dL and 10% had levels ≥10 µg/dL. The highest blood lead level measured was 17.3 µg/dL. The percentage of children with blood lead levels ≥5 µg/dL was higher among Indigenous children compared to non-Indigenous (64.2% compared to 18.8%) as was the geometric mean level (6.5 (95% CI, 4.7, 9.2) versus 2.4 (95% CI, 1.8, 3.1)), a statistically significant difference. Though based on a small convenience sample, this study identified 12 children (40%) of the sample with blood lead levels ≥5 µg/dL. Due to historical and ongoing heavy metal emissions from mining and smelting in Mount Isa, we recommend a multi-component program of universal blood lead level testing, culturally appropriate follow-up and intervention for children who are identified with blood lead levels ≥5 µg/dL. We further recommend focused outreach and assistance to the Indigenous community, and further control of emissions and remediation of existing environmental lead contamination in children’s play and residential areas. View Full-Text
Keywords: children’s blood lead level; Mount Isa; lead smelter; Indigenous; LeadCare II Point of Care children’s blood lead level; Mount Isa; lead smelter; Indigenous; LeadCare II Point of Care
►▼ Show Figures 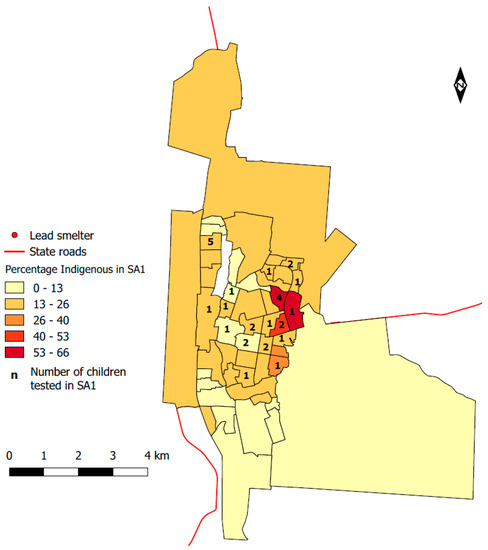