Inhibitory Effects of 3,4-Dimethylpyrazole Phosphate on CH4 and N2O Emissions in Paddy Fields of Subtropical China
Next Article in Special Issue

The focus of the present work was on the association between commuting (business and private), life satisfaction, stress, and (over-) use of the Internet. Considering that digital devices are omnipresent in buses and trains, no study has yet investigated if commuting contributes to the development of Internet addiction. Overall, N = 5039 participants (N = 3477 females, age M = 26.79, SD = 10.68) took part in an online survey providing information regarding their commuting behavior, Internet addiction, personality, life satisfaction, and stress perception. Our findings are as follows: Personality seems to be less suitable to differentiate between commuter and non-commuter groups, which is possibly due to commuters often not having a choice but simply must accept offered job opportunities at distant locations. Second, the highest levels of satisfaction were found with income and lodging in the group commuting for business purposes. This might be related to the fact that commuting results in higher salaries (hence also better and more expensive housing style) due to having a job in another city which might exceed job opportunities at one’s own living location. Third, within the business-commuters as well as in the private-commuter groups, females had significantly higher levels of stress than males. This association was not present in the non-commuter group. For females, commuting seems to be a higher burden and more stressful than for males, regardless of whether they commute for business or private reasons. Finally, we observed an association between higher stress perception (more negative attitude towards commuting) and Internet addiction. This finding suggests that some commuters try to compensate their perceived stress with increased Internet use.
Keywords: commuting; well-being; personality; gender; stress; Internet addiction commuting; well-being; personality; gender; stress; Internet addiction

Overall N = 5039 participants (N = 3477 females) answered the online questionnaire and provided socio-demographic information, information on personality data and life satisfaction, as well as data concerning their commuting behavior. The mean age of the sample was 26.79 (SD = 10.68) ranging from 11 years to 98 years. Concerning educational training within the sample, the number of school leaving certificates was distributed as follows: a total of 31.8% had no school leaving certificate, 30.8% had a secondary school leaving certificate, 14.9% had a Baccalaureate-Diploma, and 22.5% had a university degree. Participation was voluntarily and completely anonymous. There was no monetary incentive, but upon completion of the questionnaire, all participants got a brief individual feedback on their personality profiles, life satisfaction, and Internet use (Internet addiction) based on the data provided. The local ethics committee of the Ulm University, Ulm, Germany approved the study, and all participants gave electronic consent prior to participation.

The data for the present study were gathered by means of an online questionnaire. In addition to collecting data on demographics, we requested information on personality (see Supplementary Material. For further information on the used personality questionnaire please refer to Rammstedt et al. [36] and John et al. [37]), life satisfaction, and Internet addiction. Furthermore, the participants gave information on their commuting status (none, business, private) and their (emotional) attitude towards commuting, particularly stress. To assess the overall attitude towards commuting, we asked the participants four questions (“Commuting does not matter to me” (item 1, inverse coding), “Commuting deteriorates my mood” (item 2), “Commuting deteriorates my quality of life” (item 3), and “Commuting stresses me” (item 4)). All items could be rated from 1 (“I do not agree at all”) to 5 (“I totally agree”). For the analyses, item 4 was analyzed both as a single item (to assess the participants stress level in relation to commuting) and also combined in the short four-item scale described above (to assess the overall ‘attitude towards commuting’; ATC). The scores of the four items are simply added up, after reversing the score of item 1. Cronbach’s alpha for the ATC scale was alpha = 0.85.
Life satisfaction as one distinct part of subjective well-being, aside from positive and negative effect [38], was measured via questions retrieved from the German Socio-Economic Panel (SOEP) [39]. One section of the panel covers the current life situation within several areas, contributing to overall life satisfaction. For the purpose of this survey, we asked for the degree of satisfaction in the following areas: health, job, income, lodging, leisure, and overall satisfaction with life. Following a recommendation of the SOEP, the question for overall satisfaction with life was presented at the end of the life satisfaction questionnaire. This was done to avoid possible interference with specific domains of life satisfaction. It is important to note that overall life satisfaction is not a simple composite of the various domains of life satisfaction. In fact, all life satisfaction items are considered to be distinct, but also overlap to some extent (e.g., a person more satisfied with his leisure might have, as a consequence, a higher score on overall satisfaction). The items were answered, using a Likert scale, ranging from 0 (“completely dissatisfied”) to 10 (“completely satisfied”).
To gather data on Internet overuse we administered a short version of the Internet Addiction Test IAT [25], the short Internet Addiction Test (s-IAT) from [40]. This inventory consists of 12 items as opposed to the original version, which contains 20 items. The psychometric quality of the s-IAT has been considered to be of good effect [40]. The Cronbach’s alpha in our sample was high (alpha = 0.88). To more effectively assess the association between commuting and Internet use we asked an additional question; “because of commuting I use digital devices more often” (CMD). This could be rated from 1 (“I do not agree at all”) to 5 (“I totally agree”).

Since the size of the total sample greatly relied upon the publicity of the online questionnaire, the study was introduced during interviews with several national radio and TV stations. This approach was taken to ensure high media coverage throughout Germany, and to avoid biases caused by the restriction of local samples. The audience was given a short introduction to the rationale of the study, combined with information on how to access the online questionnaire. Completed questionnaires were stored on servers and processed for further analyses.

The statistical analyses were conducted using SPSS 22.0 for windows (IBM SPSS Statistics, Chicago, IL, USA). Differences in life satisfaction and personality variables for non-commuters, business commuters, and private commuters were investigated using ANOVAs, with the additional inclusion of gender effects. The associations between perceived stress, attitude towards commuting, Internet addiction, and life satisfaction were examined within the three groups of commuter type using Pearson correlations, as well as ANOVAs to test for gender effects.

After inspection of the data, 25 participants were discovered to have provided conspicuous age information: A total of 20 participants reported an age of zero. Information on age was given using a slider ranging from 0 to 99 years, where 0 was the default value. Indicating an age of zero means that the participants did not provide any information on their age. Furthermore, we found 5 participants reporting an age between 1 and 9 years. Considering the rationale of the present study, it was uncertain as to whether or not these individuals indeed reported their real age and, if such was the case, were able to complete the questionnaire in a suitable way. Therefore, we decided to exclude these 25 participants, an overall (0.5% of the original sample; 18 commuting either for business or private plus 7 non-commuters) from the sample, which left an overall sample size of N = 5039 participants (N = 5064 before) for the analyses. Moreover, N = 409 participants reported both business-commuting and private-commuting, which forfeited their inclusion into one specific group. There were no further exclusions. We further investigated participants between 11 and 14, because at 15 years, persons are allowed to start working (with a vocational training). A closer inspection of participants with an age less than 15 showed that 28 persons (in our sample a total of 248 participants were younger than 15 years) reported to undertake business-commuting. This seems to be unusual considering the age of these participants. On the other hand, commuting to and from school (97.6% of the participants younger than 15 years reported to be still in school) is obligatory and therefore might be for some participants more connected to the term business rather than private-commuting. For that reason we did not exclude those participants from the sample. All variables were normally distributed and there were no outliers. Table 1 shows the descriptive statistics for the complete sample, and non-commuters (means, standard deviation, observed minimum and maximum values, skew and standard deviation of the skew) were calculated life satisfaction variables, Internet addiction (s-IAT), CSM (“Commuting stresses me”), and ATC (overall “attitude towards commuting”).
Please refer to Table 2 for the descriptive statistics of business-commuters and private commuters.

3.3. Perception of Stress and Overall Attitude Towards Commuting

3.4. Association of Internet Use, Attitude Towards Commuting, Stress, and Life Satisfaction

In conclusion, the present study underlines the association between life satisfaction, stress perception, and commuting. Extending previous findings in literature, our results show that the reason to commute (business or private) has the potential to explain differences in life satisfaction variables, namely income and lodging. We also replicated previous findings concerning the gender specific role of stress in a commuting situation and its specific impact on females. Furthermore, we demonstrated that this association (in contrast to life satisfaction and commuting) did not vary, regardless of whether the commute was due to business or private reasons. Finally, the current study finds an association between the attitude towards commuting/stress and Internet addiction. Here, a more negative attitude towards commuting was associated with higher tendencies towards excessive use of the Internet. For future research, it would be beneficial to further investigate the association between the frequency and type of commuting behavior with Internet addiction. Moreover, strong insights can be provided by the use of applications to track activity on ubiquitous smartphones, while allowing access to specific questionnaires, and having GPS tracking activated. Essentially, this would mean combining self-reports with objective data directly collected from the smartphone. This research methodology will be complimentary to the emerging research discipline of Psychoinformatics [50]. Furthermore, this design would allow longitudinal studies to be conducted in an accessible and efficient way. Finally, future studies should aim to assess smartphone addiction, as inclinations of an overlap between Internet and smartphone addiction have been shown to exist [51,52], though they are not synonymous. Moreover, smartphones are clearly of high relevance in a commuter’s life, and recently, associations between smartphone addiction and lower productivity have also been reported [53]. 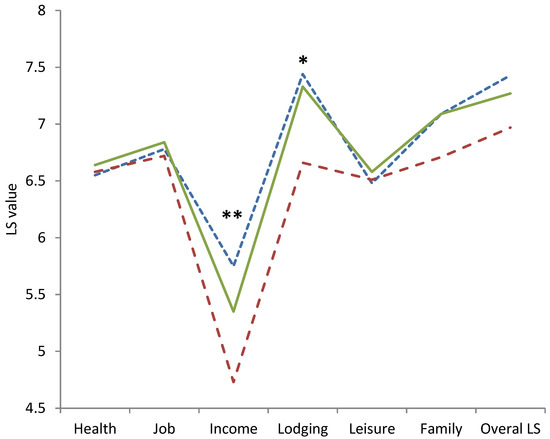