In this study, we evaluated the impact of treated wastewater effluent from two wastewater treatment plants on the physicochemical parameters and Salmonella spp. load of receiving rivers. Presumptive Salmonella spp. were obtained at all sampled points including the discharge points, with counts ranging from 0 to 4.14 log cfu/mL at both plants. Turbidity, chemical and biological oxygen demand were found to be high and mostly above the required limit for treated wastewater discharge. However, recorded nitrate and phosphate values were very low. Of the 200 confirmed Salmonella spp. isolates recovered from the treated effluent and receiving surface waters, 93% harbored the spiC gene, 84% harbored the misL gene, and 87.5% harbored the orfL gene while 87% harbored the pipD gene. The antibiotic resistance profile revealed that the isolates were resistant to sulfamethoxazole, nalidixic acid and streptomycin, but susceptible to quinolones and third generation β-lactams. These results indicate that in South Africa treated effluents are still a major source of contamination of rivers with pathogens such as Salmonella. Appropriate steps by the regulatory authorities and workers at the treatment plants are needed to enforce stipulated guidelines in order to prevent pollution of surface water resources due to the discharge of poorly treated effluents. View Full-Text
Keywords: antimicrobial resistance; Salmonella spp.; treated effluent; virulence genes; wastewater; physicochemical parameters antimicrobial resistance; Salmonella spp.; treated effluent; virulence genes; wastewater; physicochemical parameters
►▼ Show Figures 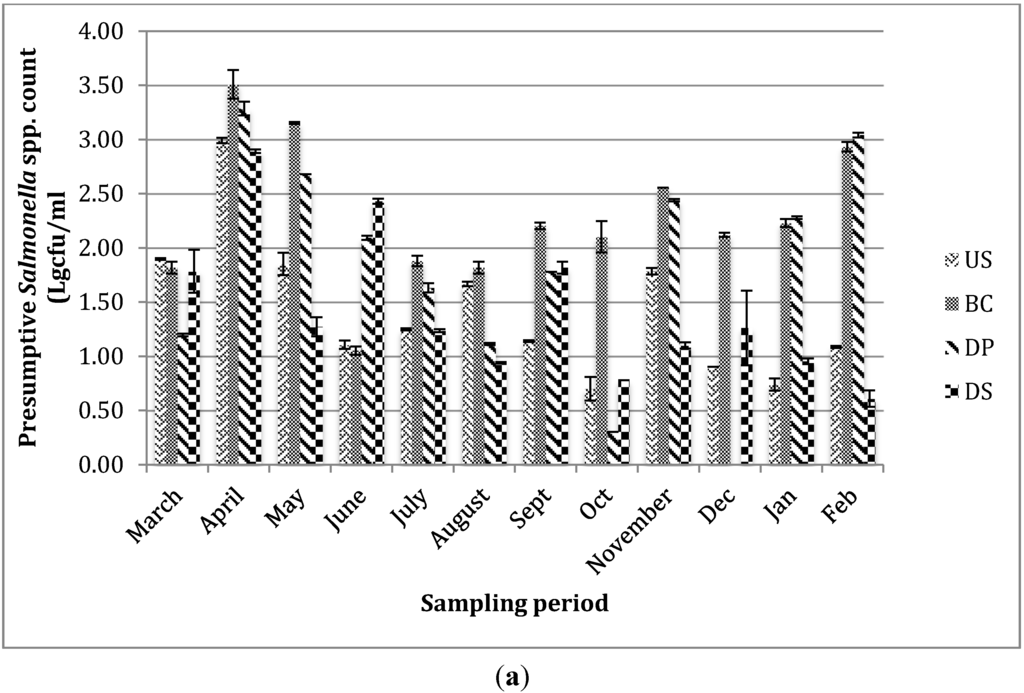