Prevalence and Characterization of Integrons in Multidrug Resistant Acinetobacter baumannii in Eastern China: A Multiple-Hospital Study
Previous Article in Journal

The objective of this study was to explore the molecular epidemiology and the genetic support of clinical multidrug resistant (MDR) Acinetobacter baumannii (A. baumannii) isolates in an ICU ward of a comprehensive hospital. A total of 102 non-duplicate drug-resistant A. baumannii isolates were identified and 93 (91.1%) of them were MDR strains. Molecular analysis demonstrated that carbapenemase genes blaOXA-23 and blaOXA-51 were presented in all 93 MDR isolates (100%), but other carbapenemase genes, including blaOXA-24, blaOXA-58, blaIMP-1, blaIMP-4, blaSIM, and blaVIM genes were completely absent in all isolates. In addition, genes of AdeABC efflux system were detected in 88.2% (90/102) isolates. Interestingly, an addition to efflux pump inhibitor, reserpine could significantly enhance the susceptibility of MDR isolates to moxifloxacin, cefotaxime, and imipenem (p < 0.01). Clonal relationship analysis further grouped these clinical drug-resistant isolates into nine clusters, and the MDR strains were mainly in clusters A, B, C, and D, which include 16, 13, 25, and 15 isolates, respectively. This study demonstrated that clinical isolates carrying carbapenemase-encoding genes blaOXA-23 and AdeABC efflux pump genes are the main prevalent MDR A. baumannii, and the co-expression of oxacillinase and efflux pump proteins are thus considered to be the important reason for the prevalence of this organism in the ICU of this hospital. View Full-Text
Keywords: Acinetobacter baumannii; multidrug resistance; nosocomial infections; oxacillinase; efflux pump Acinetobacter baumannii; multidrug resistance; nosocomial infections; oxacillinase; efflux pump
►▼ Show Figures 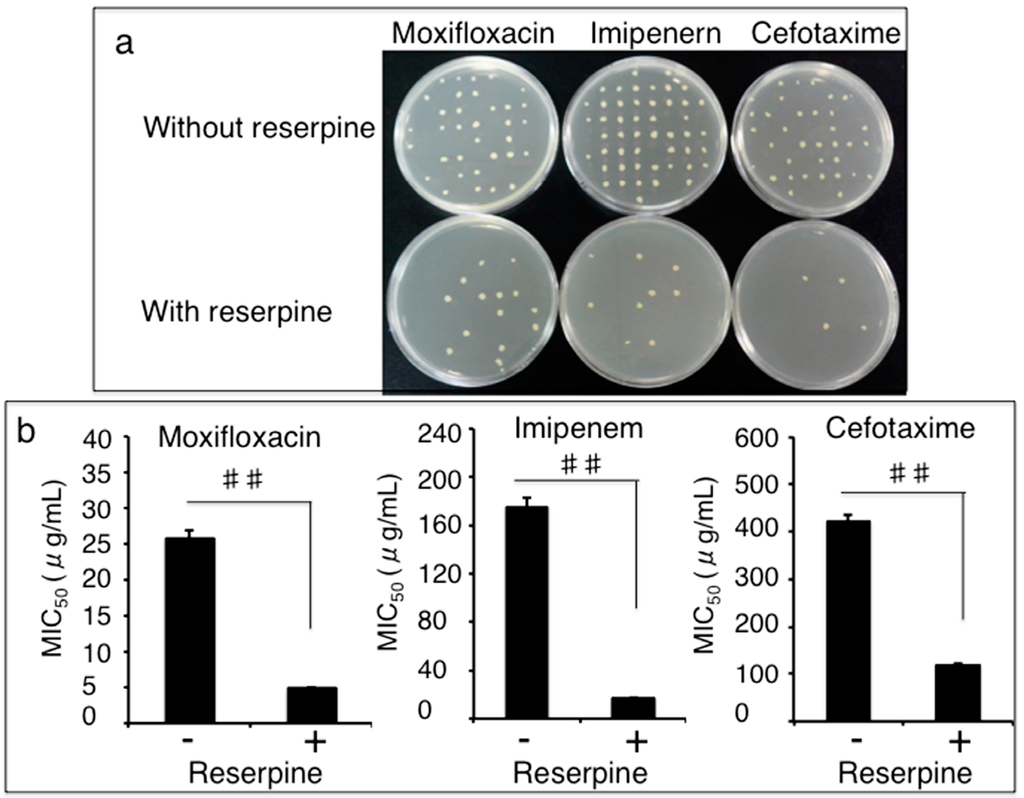