Bacterial samples were collected from the waiting rooms of six different interchange metro stations, and compared with those of treatment rooms of six different hospitals and the grassland of two parks. Samples were then grown on nutrient agar plates using the settling process, as described by the Chinese Ministry of Public Health [19]. Briefly, the culture medium was nutrient agar (Microorganism Reagent Co. Ltd., Hangzhou, Zhejiang Province, China). After sterilization, the agar plates were placed 1.2 m above ground level and exposed for 5 min in the center of the waiting room. Nutrient agar plates were cultivated at 37 °C for 48 h.
All of the colonies on a quarter of the agar of each agar plate were identified to guarantee that the samples were selected at random. Based on the results of Gram-staining and microscopic examinations, biochemical investigations including catalase and plasma coagulase tests were conducted to determine the identity of the Staphylococcus strain. After the bacteria were purified by streak culture and re-confirmed by the above identification processes, the bacterial genome was prepared following DNA isolation by the TIANamp Bacteria DNA Kit (TianGen Co. Ltd., Beijing, China). The identity of the bacterial samples was confirmed by sequencing the 16S rRNA. The primers [20] were listed by following primers, forward: 5′-AGTCGAGCGAACAGATAAGGA-3′ and reverse: 5′-AAATGGTTACTCCACCGGCTT-3′, amplicon size, 1,403 bp. The amplification was performed using the following thermocycler parameters: initial denaturation at 95 °C for 3 min followed by 30 cycles of 30 s at 94 °C, annealing for 30 s at 54 °C and 60 s at 72 °C with a final extension for 10 min at 72 °C.

Antimicrobial susceptibilities to 16 different antibiotics, including penicillin, oxacillin, gentamycin, netilmicin and 12 others (produced by Microorganism Reagent Co. Ltd., Hangzhou, Zhejiang Province, China), were determined by disk diffusion on nutrient agar plates according to the guidelines provided by the Clinical and Laboratory Standards Institute (CLSI). Briefly, each of the Staphylococcus samples was cultured overnight in liquid culture medium. The fresh bacterial culture medium was uniformly smeared on the agar plate. After that, disks with antibiotics were placed on the agar and cultivated at 37 °C for 18 h. The zone diameter breakpoints were measured to produce results, as judged by the CLSI guidelines.

2.3. Detection of Methicillin and Disinfectant Resistance Genes and Sequence Analysis

The mecA and qac genes were detected by PCR assays with the following primers: mecA gene, forward: 5′-GTTGTAGTTGTCGGGTTT-3′, reverse: 5′-CCACATTGTTTCGGTCTA-3′, amplicon size, 437 bp; qac gene, forward: 5′-CAGTTTGTAATTGGAGGC-3′; reverse: 5′-TTTCTTTGATAGCTGCTTG-3′, amplicon size, 429 bp. The amplification was performed using the following thermocycler parameters: initial denaturation at 94 °C for 3 min followed by 30 cycles of 30 s at 94 °C, annealing for 30 s at 55 °C and 30 s at 72 °C with a final extension for 5 min at 72 °C.
PCR products were separated by agarose gel (1.2%) electrophoresis at 55 V, stained with ethidium bromide, and de-stained in Tris-acetate-EDTA (TAE). Gels were photographed under UV transillumination. PCR products were sequenced by Jiesen Co. Ltd. (Shanghai, China) and sequences were analyzed with Vector NTI 10.0 and Mega 5.0 software. An unrooted phylogenetic tree was constructed using the neighbor-joining method and the Poisson correction model in Mega 5.05 [21]. The internal branching probabilities were determined by a bootstrap analysis with 1,000 replicates. Additionally, mecA and qac sequences from different sources were used to compare against the sample sequences. The dataset of the nucleotide sequences for staphylococcal strains were retrieved from the National Center for Biotechnology Information (NCBI) database. An alignment of all the sequences was performed using ClustalW 2.0 software [22].

A semi-quantitative detection method was used to identify biofilm formation [23,24,25]. Briefly, fresh bacterial samples were mixed with new liquid nutrient medium in a 96-well plate (each strain sample was inoculated into four wells). The absorbance at 600 nm of the medium was adjusted to 0.01 to guarantee that all of the sample media had the same original concentration. After samples were cultivated for 24 h, they were washed in PBS four times. The samples were stained first with Bouin’s fixative for 1 h. After washing with phosphate-buffered saline, crystal violet was used as a second stain, and then samples in the wells of 96-well plates were washed gently with running water. Isolates were identified as biofilm-positive if the absorbance value at 570 nm differed significantly from the negative control strain (ATCC12228) (each strain sample was inoculated into four wells, thus, four absorbance values can be acquired. It would be compared with the control strains with t-test, p < 0.05). 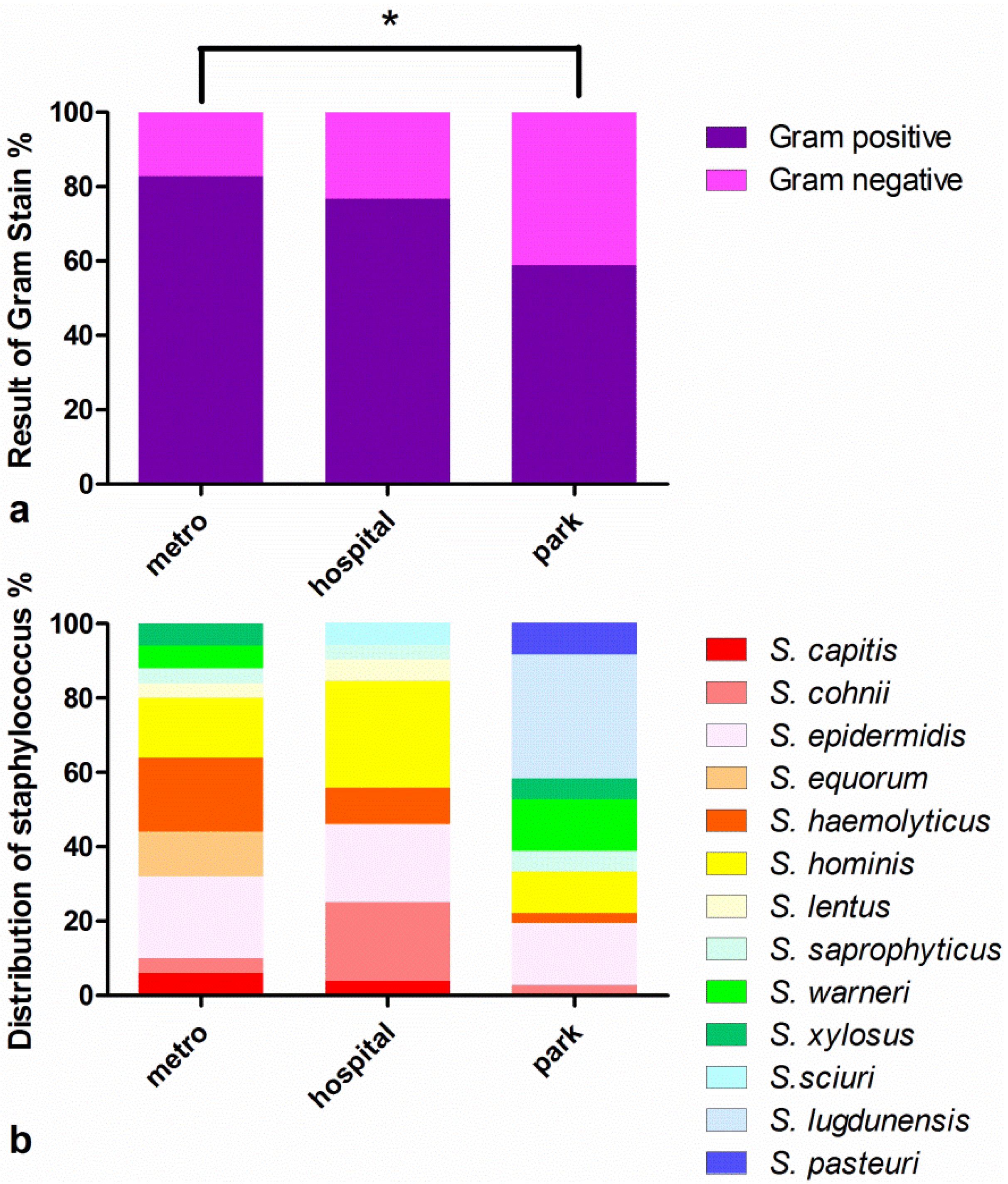 Table 1. Resistance to 16 antibiotics among bacterial samples from different sources. 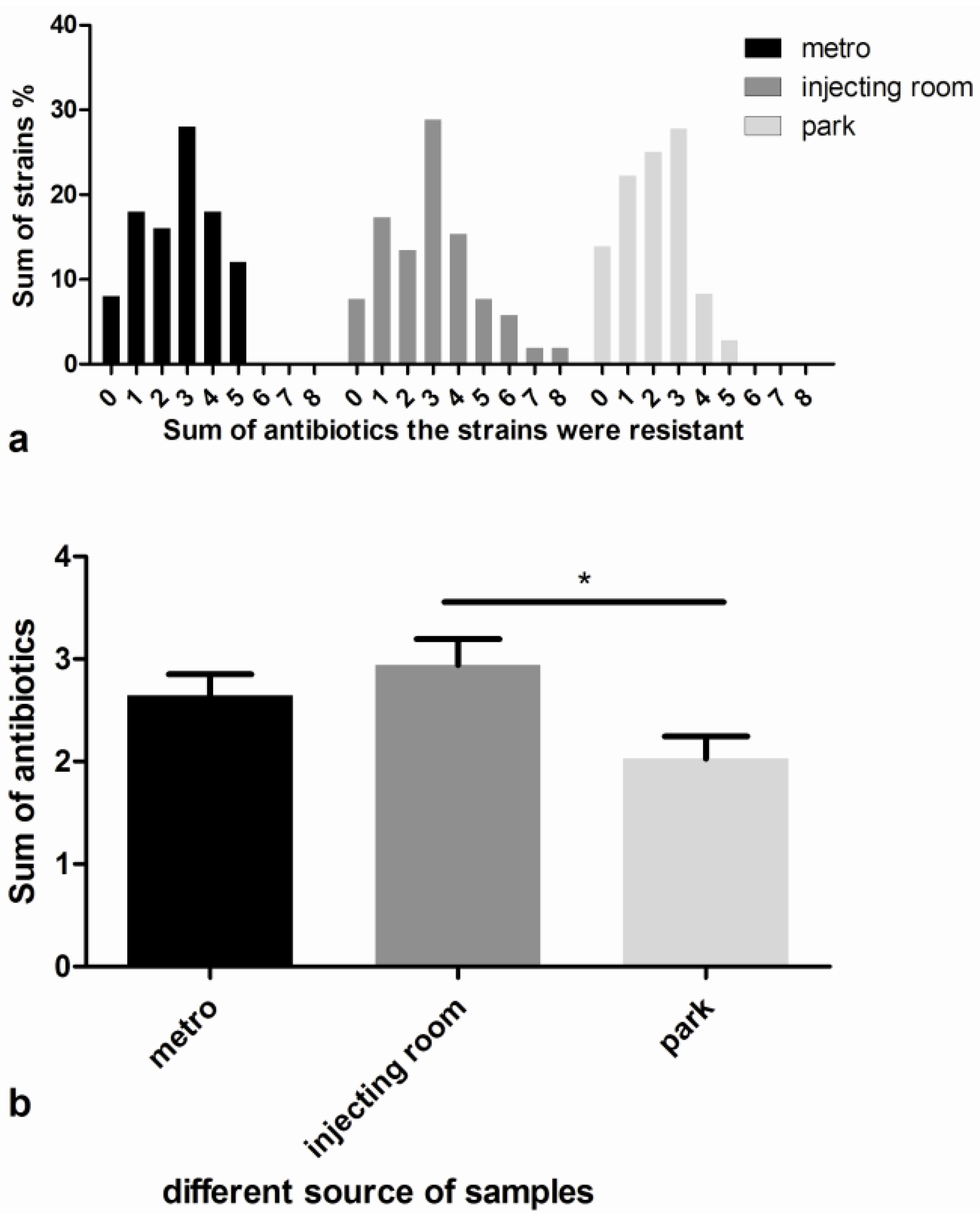 Methicillin and disinfectant resistance genes were detected by PCR (Table 2) and the positive products were sequenced. The presence of both the qac and mecA genes in the park samples was significantly lower than samples from the metro stations and treatment rooms (χ2 test, p < 0.05). However, no significant difference was found between treatment rooms and metro stations.

Table 2. Results from the detection of methicillin and disinfectant resistance genes. The presence of the mecA and qac genes were both significantly lower in the park samples compared to those from the metro and hospital (p < 0.05).

3.4. Sequence Analysis of the Resistance Genes

The positive products of PCR were all sequenced. According to the BLAST result, the representative sequences were selected for further sequence analysis. The sequences were analyzed using Mega 5.0 and phylogenetic trees were constructed (Figure 3). 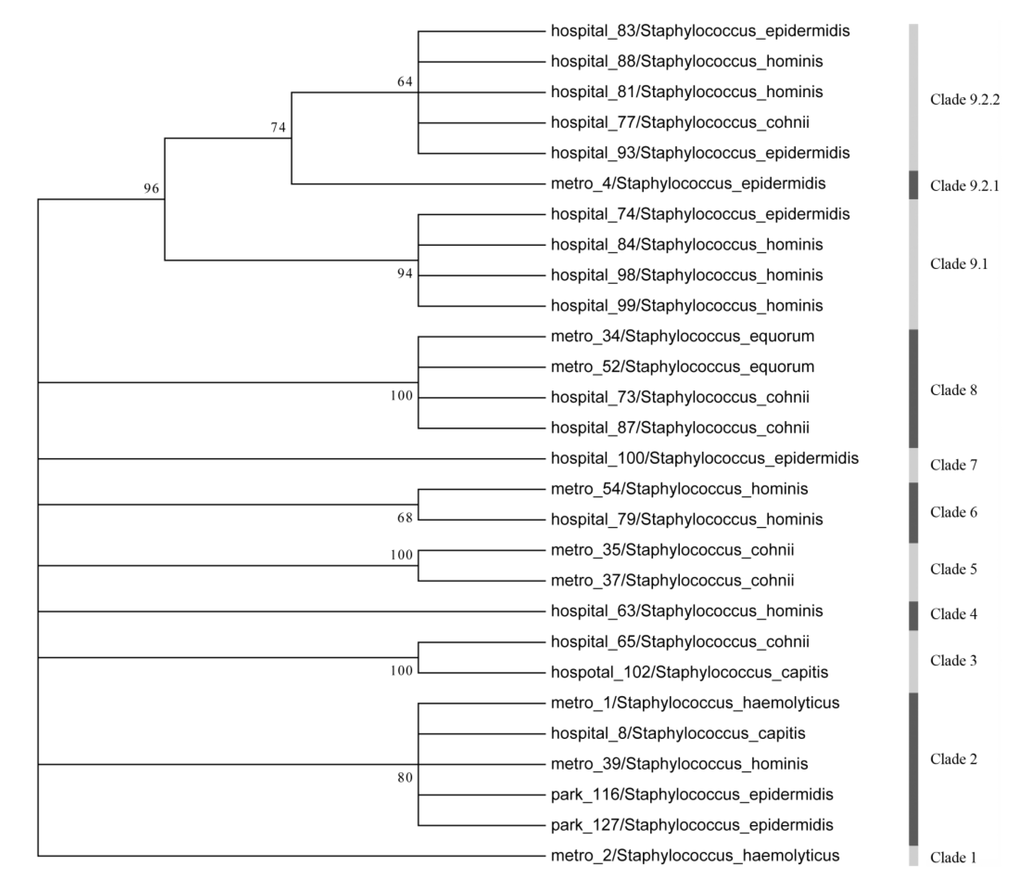 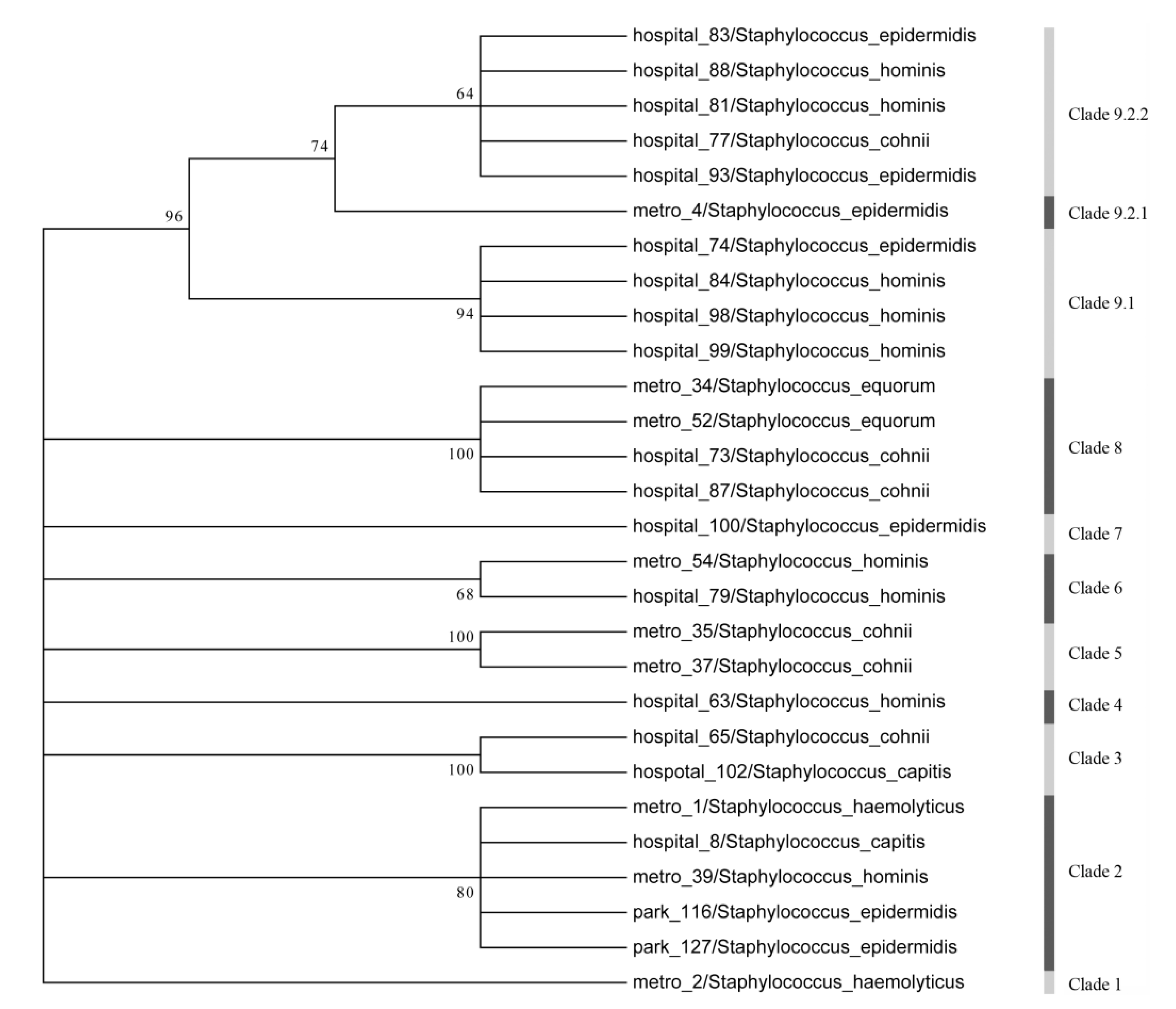 The sequences of the mecA genes were shown to be highly conserved among the Staphylococcus strains identified in both metro stations and treatment rooms. BLAST analysis showed that mecA sequences had a higher rate of similarity and a lower aberration rate compared with reference sequences in GenBank, whereas the qac gene fragments were more variable. The phylogenetic tree showed that qac gene had nine phylogenetic clades (Figure 3). Furthermore, sequences from the hospital had a higher degree of similarity, although the hospitals were distributed throughout the city. Clades 3, 4, 7 and 9 mainly consisted of samples from the hospital, while samples from metro stations and parks were distributed separately.

With the appearance of antibiotic-resistant bacteria, increasing numbers of infections are causing huge losses to both economic concerns and social resources over recent decades, and this has become a global problem [26,27,28]. Although Staphylococcus strains, especially CNS, do not often cause disease, they can have strong levels of resistance to many antibiotics [29], and antibiotic resistance genes can accumulate in these strains. Thus, these bacteria have become an exchanger and have consequently spread antibiotic resistance genes to other strains. CNS strains, such as Staphylococcus epidermidis and Staphylococcus saprophyticus, are easily detected on human skin and mucous membranes as normal flora. The huge passenger flow in metro systems may provide ideal conditions for the widespread circulation of CNS strains.
Here, we used samples from a park and hospital as control groups to compare the level of antibiotic resistance of bacteria found in the metro. As an outdoor environment, the air circulates in parks significantly more than in the metro or hospital, and can therefore be regarded as a more natural environment. Both hospital and metro stations are indoor environments with crowds. No significant difference was found in either the level of antibiotic resistance or the distribution of antibiotic resistant strains between the hospital and metro samples, but both differed significantly when compared with the park samples. This indicated that higher levels of antibiotic resistance are found in closed crowded environments. Antibiotic resistance genes could be transferred between bacterial species by the exchange of genes and recombination events, such as transformation [30,31], transduction [32,33,34] and conjugation [35]. Thus, with increasing numbers of bacterial contacts, more antibiotic resistance genes can be acquired by a particular strain. The presence of the antibiotic resistance gene, mecA, and the anti-disinfectant gene, qac, were found at significantly higher levels in the metro and hospital samples than in those from the park, which may also have been a consequence of the crowded indoor environments. However, as there is a higher volume of people passing through the metro, the bacteria found here are more likely to have genes with high levels of mobility.
In our study, the antibiotics selected for sensitivity tests were all applicable to Staphylococcus and our results demonstrated that antibiotic resistance was present in the majority of bacteria obtained from metro stations. The samples showed different resistance profiles to different antibiotics. This was probably a result of the frequency of their use and the history of these different antibiotic types. Although most staphylococcal strains showed resistance to one or some drugs, the presence of multi-resistance was far lower than in those isolated from patients in other reports [36].
Staphylococcus strains with mecA are resistant to lactam antibiotics and frequently have multi-drug resistance, which may represent a serious health and economic concern [37,38]. Therefore, it is highly important to detect mecA, especially in Staphylococcus samples. In recent years, increasing numbers of reports have shown that the mecA gene is present in CNS strains, including hospital-acquired infections, neighborhoods [39,40], animal epidermis [41] and beaches [42], amongst others. To date, no reports have described the detection or discovery of mecA in airborne bacteria isolated from public transportation systems. Our research has shown that the presence of mecA from Staphylococcus was not as high as in strains from patients who have used antibiotics for long periods, which can reach over 90% in China [43]. Nevertheless, the metro is an important part of the Shanghai public transport system and should warrant closer inspection.
Quaternary ammonium compounds, diamidines and biguanidines are components of many antiseptic compounds such as benzalkonium bromide. These disinfectants are likely to be used for daily cleaning. The gene product of qac can help bacteria to resist these disinfectants, but this has not previously been assessed in strains isolated from public transportation system. The detection of qac has been reported in the food industry [44], animal husbandry [45] and hospital environments [46]. The efficiency of sterilization procedures employed in public areas should be improved by the informed selection of suitable disinfectants according to bacterial antibiotic resistance profiles.
Biofilms can be defined as communities of microorganisms that are attached to a surface [47]. The extracellular polymeric substance also acts as a physical barrier to the permeation and the action of antimicrobial agents [48]. Staphylococcus strains can form biofilms, and recent research has shown that the bacteria within biofilms are much more resistant to antibiotics than planktonic cells [49,50]. In this study, 22% of the samples from metro stations were positive for biofilm formation. Combined with the antimicrobial susceptibility test results, biofilms are likely to enhance bacterial antibiotic resistance. Furthermore, in the bacterial community, antibiotic resistance genes can be transferred more easily and spread across a wider area in biofilms. As biofilms can form more frequently in wet environments, metro stations in Shanghai provide an excellent opportunity for growth as air-conditioners function most of the time, and most stations are underground with inefficient ventilation facilities. Thus, it is important to detect the formation of Staphylococcus biofilms in metro stations.
In conclusion, multi-resistant Staphylococcus and antibiotic resistant genes were found more commonly in metro stations than parks. The closed indoor environment and crowded passenger volumes may accelerate the spread of antibiotic resistant strains. More attention should be paid to the inspection and control of antibiotic resistant strains in public transportation systems.