The Impact of Family History of Allergy on Risk of Food Allergy: A Population-Based Study of Infants
Previous Article in Journal

Suitability of Optical, Physical and Chemical Measurements for Detection of Changes in Bacterial Drinking Water Quality

The bacterial strain Pseudomonas fluorescens P17, biotype 7.2 (ATCC 49642) was used as a test strain in this study. A nutrient solution for P. fluorescens was prepared with commercial spring water and contained 1 mg/L acetate C/L and 1.5 g/L inorganic nutrient salt solution [29]. The solution was sterilized in an autoclave (120 °C) for a minimum of 15 min. After sterilizing, zero samples were taken and P. fluorescens bacteria inoculation was pipetted into duplicate nutrient solution flasks (1,500 mL). The flasks were incubated at room temperature (20.9–26.6 °C) and samples were taken every day for one week after the inoculation, apart from the first experiment, in which the bacterial growth was followed for two weeks. The colony counts (CFU) were measured on Reasoner`s 2 Agar (R2A) medium (Difco, Detroit, MI, USA) incubated at 22 ± 2 °C for 7 days [10]. Acridine orange direct counting (AODC) [14] using an Olympus BX51TF epifluorescence microscope (Olympus Co. Ltd., Tokyo, Japan) was used to analyse the total bacterial counts (TBC). The experiment was repeated nine times.
During the experiment, several optical and physical parameters were measured from the samples. UV-absorbance at 254 nm and absorbance at 420 nm were measured using a spectrophotometer (UV 1601, Shimadzu Corporation, Kyoto, Japan). Turbidity (at 860 nm) was measured using a turbidity meter (Turb 555-IR WTW, Weilheim, Germany) and for total particle counts, a particle counter WaterViewer S/N 604-2 (Pamas GmbH, Rutesheim, Germany) was used with a sensor having a 1 µm particle size detection limit (max. 120,000 particles/mL). The particle counter separated the number of particles per millilitre into 8 size classes in the ranges: 1–1.5, 1.5–2, 2–4, 4–8, 8–15, 15–25, 25–50 µm and >50 μm. Temperature, pH and electric conductivity were measured using a pH-meter (340i WTW, Weilheim, Germany). The ATP concentrations were measured with an ATP Biomass Kit HS Prod. No. 266-311 (BioThema AB, Handen, Sweden) using a luminometer (BioOrbit, Turku, Finland).

Drinking water samples were analysed from the drinking water distribution systems of five towns with populations of ca. 9,400–92,600 inhabitants and one rural community with a population of ca. 7,500 in central Finland. Water samples were collected in three consecutive sampling rounds between May and December in 2007 with a total of 52 water samples being analysed. In three towns (A, B, C), the raw water source was groundwater. In town D, artificially produced groundwater was distributed. Town E distributed drinking water originating from a mixture of groundwater and treated surface water. In the rural community F, groundwater was used. Post-chlorination was used as the disinfection in four towns (A, C, D and E). There was no disinfection in town B. UV disinfection was used in the waterworks of rural community F. The selection criterion of sampling locations from the distribution system was any prior detected water quality deterioration. At the time of sampling, sodiumthiosulphate was used to neutralize active chlorine from the samples. Water samples were delivered to the laboratory in coolers and analysed within 24 h.
The optical and physical parameters were measured as described in Section 2.1 exception for the particle counter used with the two latter sampling rounds, which was the PAMAS SVSS-C with sensor HCB-LD 50/50 having a 1µm detection limit (max. 24,000 particles/mL) and measured size classes of 1–1.5, 1.5–2, 2–2.5, 2.5–3, 3–3.5, 3.5–4, 4–4.5, 4.5–5, 5–5.5, 5.5–6, 6–6.5, 6.5–7, 7–7.5, 7.5–8 µm/mL. The concentration of free chlorine was measured using a photometer (Chlorometer 1000, Palintest, Gateshead, UK). The heterotrophic plate count (HPC) was analysed on R2A medium (Difco) at 22 ± 2 °C for 7 days [10] and on Yeast extract agar (YEA) at 22 °C (ISO 6222, 1999). Counts of coliform bacteria (including E. coli) and intestinal enterococci were analysed with a membrane filtration method utilising the mEndo Agar Les medium (SFS 3016, 2001) and the Slanetz & Bartley medium (ISO 7899-2, 2000), respectively. The TBC was counted as described in Section 2.1. The nutrient concentrations were analysed from the distribution water system of town D (number of samples, N = 14). Assimilable organic carbon (AOC) was analysed according to Miettinen et al. [29] and total organic carbon (TOC) with a high temperature combustion method (5000 TOC analyser, Shimadzu). Microbially available phosphorus (MAP) was analysed according to Lehtola et al. [30] and the standard method SFS-EN 1189 (1997) was used to analyse total phosphorus (total P).

2.4. The Case of an Accidentally Contaminated Distribution Network

During this work we had an opportunity to utilise the measurements with drinking water samples (N = 3) originating from an accidental sewage contamination episode. The contamination led to a serious waterborne outbreak in the Nokia municipality in December 2007. Turbidity, particle counts, temperature, pH and EC were measured as described in Section 2.3. The cause of the contamination was an illegal connection between a sewage pipe and the distribution system [31].

Table 1. Descriptive statistics of bacterial numbers (CFU/mL and cells/mL) in the Pseudomonas fluorescens regrowth experiment and the E. coli experiments in spring water. 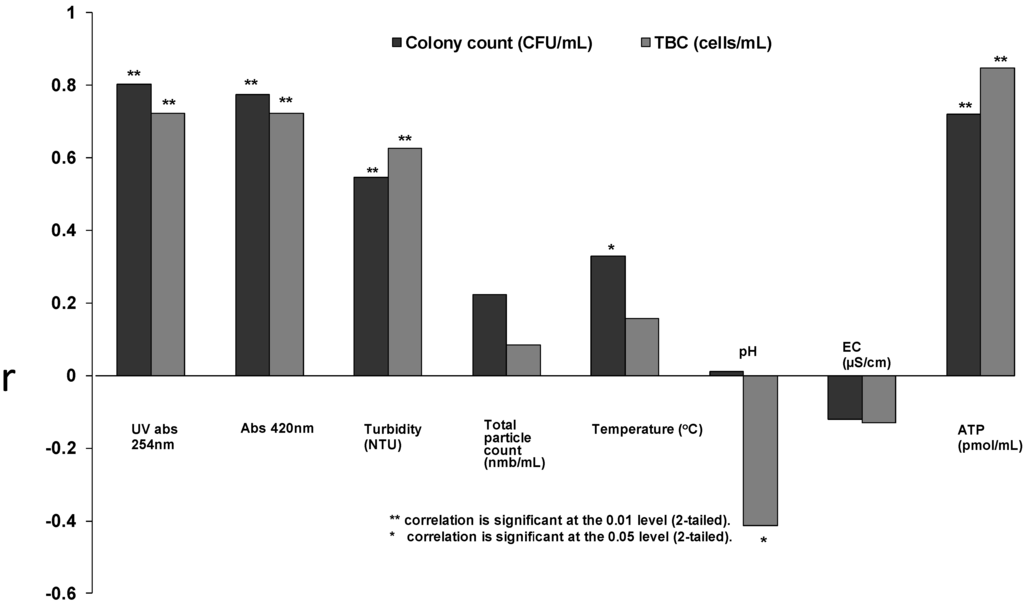 Dilutions of the E. coli bacteria in spring water were prepared and optical parameters were measured. It was observed that UV-absorbance at 254 nm, turbidity and particle counts decreased over 85% when the bacterial counts decreased from 107 CFU/mL to 106 CFU/mL (Figure 2). The measured values of UV-absorbance at 254 nm and turbidity in the samples with an E. coli concentration of 106 CFU/mL were 0.04 ± 0.01 absorbance units and 0.07 ± 0.03 NTU, respectively. When E. coli concentrations were below 106 CFU/mL, the absorbance and turbidity values lost their relation to the bacterial counts and the measurements were evaluated to be non-reliable (Figure 2). In particle counting with the 0.5 µm sensor, a threshold value of 135,550 ± 19,839 particles/mL was achieved at the E. coli concentration of 106 CFU/mL. With 105 CFU/mL the threshold was 6,707 ± 6,557 particles/mL. In total, 97% of the counted particles were classified to a particle size fraction of 0.5–0.6 µm in accordance with the known size of E. coli cells (0.3–1.0 µm × 1.0–6.0 µm; Brenner and Staley [32]). The UV-absorbance, turbidity and particle count of the commercial spring water without E. coli addition was 0.006 absorbance units, 0.01 NTU and 1,100 particles/mL, respectively. 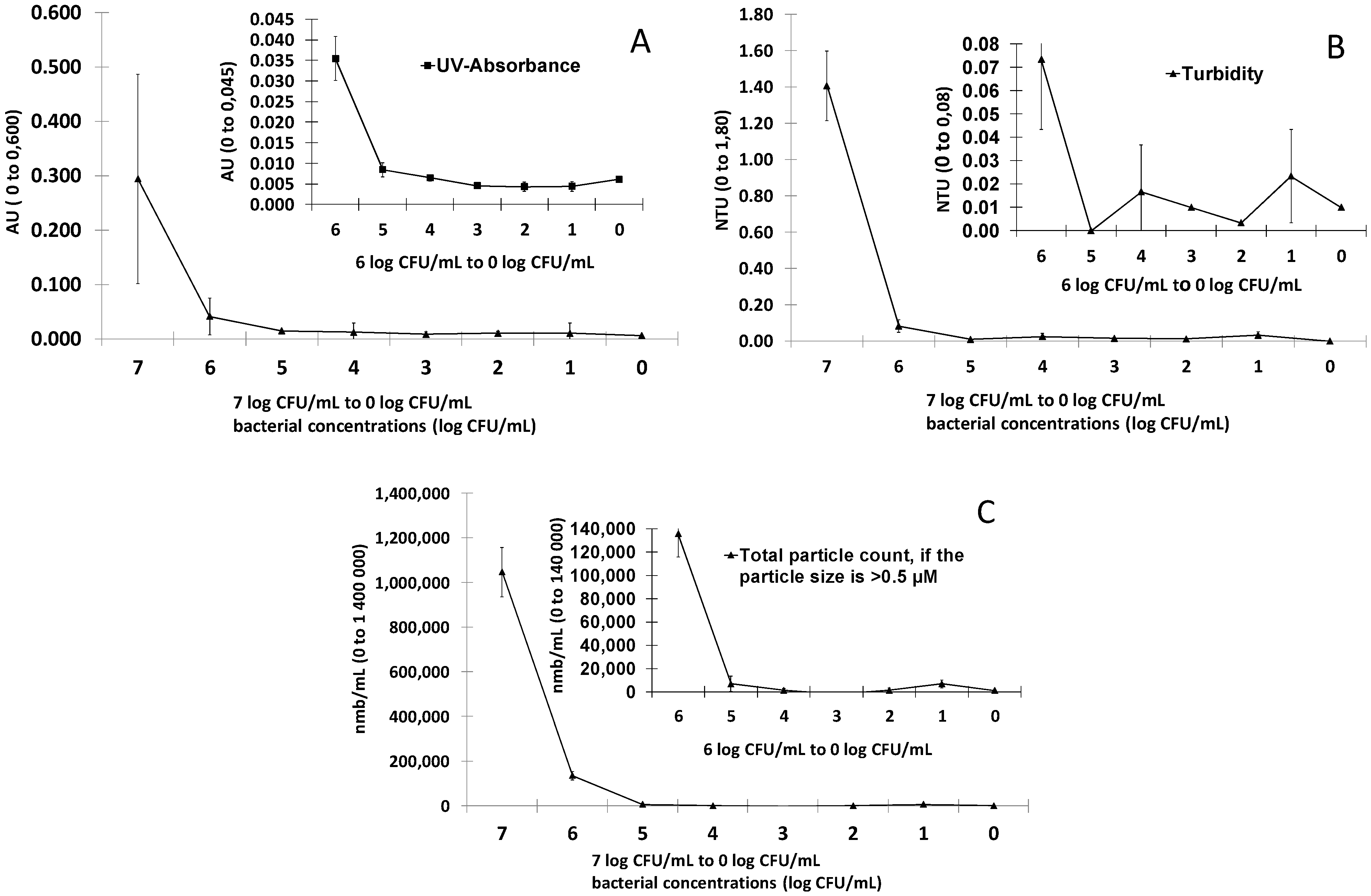 The descriptive statistics of the measured parameters from the analysed distribution water samples originating from six different distribution systems are presented in Table 2. One colony of coliform bacteria/1,000 mL was detected in three out of 34 drinking water distribution water samples. It was detected from town D, indicating the inefficiency of post-chlorination to prevent regrowth in this distribution. No E. coli or intestinal enterococci were found from the samples. Mean AOC, MAP, TOC and total phosphorus concentrations (±SD) in the distribution system of town D were 126 µg ± 30 AOC-C/L µg/L, 0.04 ± 0.05 µg/L, 2.7 ± 0.6 mg/L, and 1.7 ± 0.6 µg/L, respectively.

3.4. The Case of an Accidentally Contaminated Distribution Network

The drinking water distribution system of Nokia town was heavily contaminated with a purified sewage intrusion, resulting in the exposure of inhabitants to a wide range of faecal microbes including norovirus, Campylobacter, Giardia, Salmonella as well as high concentrations of faecal indicator bacteria, E. coli, intestinal enterococci and Clostridium perfringens [31].
Particle measurement with a 1 µm detection limit for the particle size was used to examine the drinking water samples originating from the contaminated distribution system of the town. The comparison of total particle counts and particle fractions (Figure 4) during and after the contamination event highlighted the ability of particle counting to function as an early warning tool. HPC on R2A in the water sample taken on 1 December 2007, during the contamination, exceeded 5.0 × 106 CFU/mL. Three days after the contamination event, on the 4th December 2007, the HPC value had declined to 1.8 × 102 CFU/mL. At the same time, the particle counts decreased from 4.4 × 104/mL to 1.2 × 104/mL (Δ74%) and turbidity decreased from 4.6 to 1.2 NTU (Δ74%). At two weeks later, 17 December 2007, the particle count in the water sample was much lower, being 1.7 × 102/mL (Δ99.6%) and the turbidity value was 0.3 NTU (Δ94%).

Results here indicated the usefulness of optical, physical and chemical measurements in detecting impurities in drinking water and the ability of these measurements to be used to detect changes when drinking water is undergoing deterioration.
The results confirmed that although turbidity is a good basic measurement for detecting changes in drinking water quality, the particle count gives more precise information. Particle counting was also found to work as a feasible indicator of bacterial counts in a real water contamination incident. Our results also indicated that absorbance measurements (254 nm, 420 nm) have potential to work at some extend as tools that could be used for detecting bacterial regrowth and intrusions in drinking water systems.
Detection limits for the optical measurements of UV-absorbance, turbidity and particle counting were high when pure cultures of bacteria were tested (limits were met at E. coli concentrations of 106 CFU/mL). The uncertainty of measurements increased when bacterial concentrations decreased below the detection limits. It seemed that limit was also there with the analysed non-contaminated drinking water samples were relationship was not found when bacterial counts were below the 106 CFU/mL.
Free chlorine concentration exhibited the strongest correlation with HPC when analysing distribution system water samples, while ATP measurement was found to be a useful tool for assessing the viability of the bacterial cells.

This work was performed as a part of research project VESIKKO (3150/31/05), funded by the Finnish Agency for Technology and Innovation (TEKES). Yrjö Hiltunen and Jaakko Rämö and Asko Vepsäläinen are acknowledged for a critical reading of the manuscript. We wish to give special thanks to the staff of the Laboratory at the Water and Health Unit at the National Institute for Health and Welfare.