Evaluation of Full-Facepiece Respirator Fit on Fire Fighters in the Municipality of Jeddah, Saudi Arabia

The purpose of this study was to assess the effect of personal variables on the fit of the respirators used by firefighters and workers in highly polluted environments. However, resistance from many plants managers was met to conduct the study on their workers. Therefore, we were forced to limit the study on firefighters who were found very cooperative. Forty volunteer firefighters from different departments participated in the study. They were subjected to a daily leak rate measurement using a Control Negative Pressure (CNP) fit tester for five consecutive days. Two types of respirators were used for each volunteer: the Drager type and the MSA. At the end of the study, the association between face shape and presence of beard with the respirator leak rates was investigated. A significant difference in the leak rate was detected between the two types of respirators used, with the Drager respirator having higher leak rates. The presence of a beard increased dramatically the leak rate whatever the face shape was. The oval shape was the best fitting to the respirators, followed by the rounded and finally the rectangular face. The study recommends that personal variables like face shape must be taken into consideration and fit testing must be carried out periodically, to specify the respirator that best fits each firefighter. Having beard must be absolutely prohibited, since it can be life threatening in environmental dangerous conditions such those encountered during extinguishing fires and overhaul situations.
Keywords: respirator; firefighters; Control Negative Pressure; leak rate; face shape; full-face piece respirator; firefighters; Control Negative Pressure; leak rate; face shape; full-face piece

Figure 1 shows the two types of respirators (DRAGER Full Face Respirator and MSA Full Face Respirator), that were used in this study.
A fit Tester (Figure 2) Model 3000 Control Negative Pressure QNFT (Dynatech Nevada, Carson, NV, USA) was used during the study. Leak rate of the air in cc/min was measured directly for each fit test. Measurements were repeated for three times every day during the 5-day period of the study. These measurements for mask leak rate were considered one test and this test was applied to two different respirator types (DRAGER and MSA).

The study was applied in the industrial zone in Jeddah city. The fire station in this location has 157 firefighters working in three shifts during a 24 h period. Only 40 firefighters used those two types of respirators, so forty firefighters from this fire station, ages 23-40, were fit tested.
A facial fit test to determine leakage by creating a negative pressure inside the facepiece similar to normal inspiratory pressures was conducted using two types of respirators. This study was performed to investigate the effectiveness of each type of respirator for the protection of a firefighter from a hazardous atmosphere. The study involved the same test on the same participants with a best fit to record the least amount of leak rate measurement for each. Trials were conducted until a minimum leak rate was established.
The test was conducted for a period of five working days, from Saturday to Wednesday. Every day the Quantitative Fit Test (QNFT) was performed for each type of respirator.
The QNFT was used as the fundamental component for selecting the best fitting respirator for a given worker to achieve a desired level of protection in the workplace. QNFT is based on the use of controlled negative pressure (CNP).

The human subject protocol involved 40 volunteer subjects working as firefighters in the civil defense section of the Ministry of Interior, Kingdom of Saudi Arabia. Each subject participating in the study completed a 5-10 min respirator/fit-test familiarization training course which involved donning the mask, holding the breath, measuring the leak rate and maintaining a calm exterior position (not moving) while sitting on a chair with a straightforward look during the test.
Two different types of full-face respirators were used: the MSA air purifying respirator model and the DRAGER were given to each subject. Each subject completed three fit test per day of both assigned respirators (MSA and DRAGER) for a period of five consecutive days (i.e., 40 subjects × two respirators/subject × three trials/fit test/mask/day × five days = 1,200 total fit tests. The respirator was removed and re-donned by the subject between each fit test. This study design allowed the fit of each subject’s two assigned respirators to be assessed on the basis of 15 individual mask donning over the course of a five day period.
Distinguishing between the different face shapes was carried out according to the procedure followed by Farias, et al. [24]. A digital camera (Canon EOS 500D) was placed at a distance of 1.10 m from the face with subjects seated in front of a black background. Images were edited with the help of the program Photoshop, first by converting them to black and white, then measuring using an image tool program. Face shapes were classified according to the face angle (Fa). Fa was determined by the tangent to the upper lateral face contour and the bipupillary line. Accordingly, faces with Fa ≤ 78.01° were classified rounded, those between 78.02° and 81.52° oval, and those ≥81.54° rectangular.
A comparison was done at the end of the study between the two types of respirators, the different face shapes (oval, rectangular and rounded faces), and the presence or absence of beard. Major calibrations (results of calibration are shown in Table 1) of the CNP system for pressure and flow-rate transducers were performed at the beginning of the study for each day [12].

Table 2 shows the mean leak rate among firefighters and the percentage of fitness by face shape, presence of beard and type of respirator. From the first look, it is clear that there is a difference in the leak rate between the two types of respirators. Clearly, Drager respirators leak much more than MSA ones (2630.7 versus 589.0 cc/min). 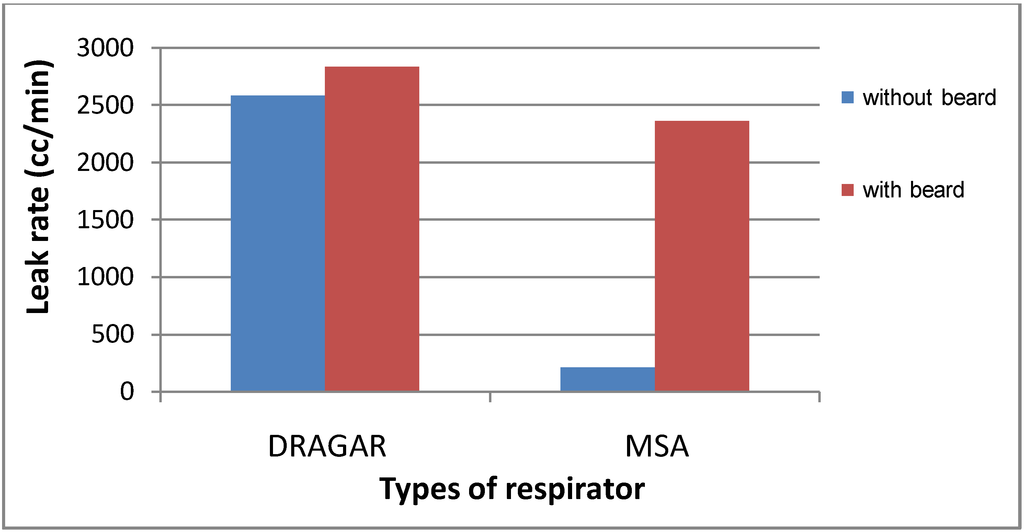 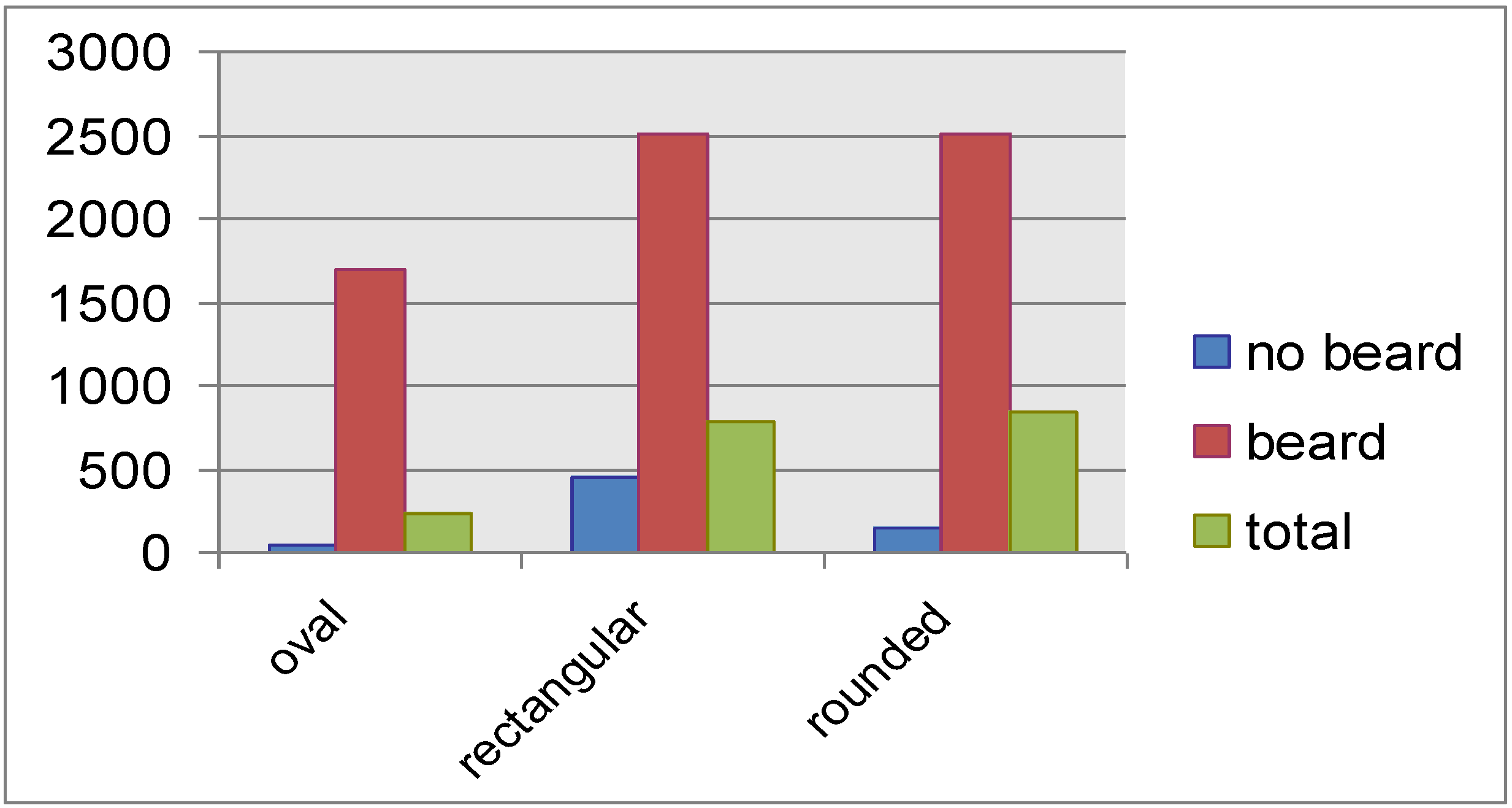 The results obtained in the present study are strongly supported by those reported in the literature [11,15,16,17,18,19,26]. The importance of having a beard in the Saudi population, due to either cultural or religious reasons, makes us recall Stobbe’s opinion that for a negative pressure respirator, facial hair is a health hazard and no beards should be permitted. The times when facial hair may be permitted should be very restrictive and need to be accompanied by training and meet all the requirements of a complete respirator program [17].
Table 2 also shows the distribution of percentage of respirator fitness among the studied population. Taking the value of 1,000 cc/min as the maximum permissible leakage rate [22], results exceeding this value, were considered unfit. Accordingly, all the results obtained from the Drager respirator were found to be unfit. Concerning the MSA respirator, again all data obtained from bearded firefighters were unfit. All results obtained from non-bearded firefighters (with oval, rectangular or rounded faces) were fit. This is represented in Figure 7.

Wearing a high quality respirator with equipped with excellent filters is not enough to ensure full protection of workers exposed to dangerous environments. Personal characteristics play an important role in this matter. Respirators must be tested for fitness periodically and on individual basis, as the present study, showed variations in respirators fitness according to face shape. Having a beard was proved to increase dramatically the leak rate, therefore, it is recommended to prohibit beard growth among firefighters. Beards can be life-threatening during fire extinguishing activities, as well as, during overhaul operations. Finally it is recommended to carry out respirator fitness research on larger scales, including studies on storage conditions and manipulation of respirators used in different industries.

The researcher wishes to express his deepest gratitude and thanks to the Deanship of Scientific Research, King Abdulaziz University, for sponsoring this work. Thanks also are due to the officers and soldiers in the different Departments of Civil Protection for their participation in the present work. We appreciate wholeheartedly the time and effort they spent.