The replenishment of adiponectin—an adipocyte-derived hormone with salutary health effects—has recently been proposed as a new approach to treat hypertension, also ameliorate cardiovascular and metabolic risks. We conducted a prospective placebo-controlled, non-randomized and investigator-blinded dietary intervention study to evaluate the health effects of dietary intake of Sujiaonori (Ulva/Enteromorpha prolifera Müller) algal biomaterial (SBM), especially on adiponectin production, blood pressure (BP), and body mass index (BMI) in human subjects. Participants (N = 32) were divided into two equally sized groups (n = 16 for each group): SBM group (subjects supplemented with 3 g SBM powder twice a day during meal) and the control group (subjects who took 3 g of a supplement made of 70% corn starch powder and 30% spinach twice a day) for four weeks. Two health survey questionnaires (dietary and current health questionnaires) were completed anonymously, saliva sampling was done for adiponectin measurement by ELISA, and blood pressure (BP) and anthropometric parameters were measured at baseline and four weeks later. Student paired t-test was performed to compare baseline and post-intervention data on outcome variables between the two study groups. Results showed a 2.24-fold increase in adiponectin level in SBM group (2.81 and 6.26 ng/mL at baseline and at the end of study, respectively) (p < 0.01); whereas no significant change was observed in controls (3.58 and 3.51 ng/mL, respectively) (p > 0.05). In SBM subjects, an improvement of BP profile was noted with a significant decrease in systolic BP (p < 0.01). A positive correlation was found between SBM supplementation and adiponectin level, whereas an inverse correlation was noted between SBM supplementation and blood pressure, and also BMI. These findings suggest that SBM-increased adiponectin level and improved BP in a sample of Japanese young adults, and has the potential to improve blood pressure in humans. View Full-Text
Keywords: adiponectin; BMI; blood pressure; dietary supplementation; Sujiaonori adiponectin; BMI; blood pressure; dietary supplementation; Sujiaonori
►▼ Show Figures 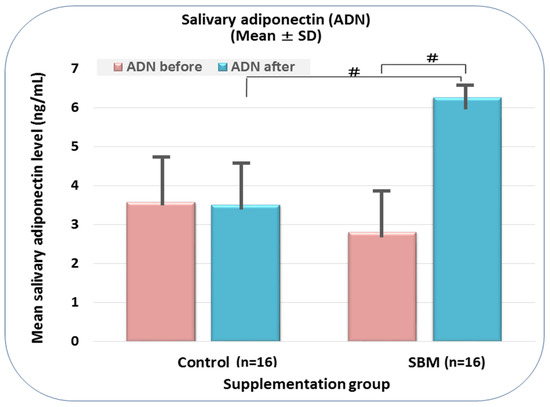