Antimicrobial and Antitumor Activities of Novel Peptides Derived from the Lipopolysaccharide- and β-1,3-Glucan Binding Protein of the Pacific Abalone Haliotis discus hannai

Chul Min An
1 and

Antimicrobial peptides are a pivotal component of the invertebrate innate immune system. In this study, we identified a lipopolysaccharide- and β-1,3-glucan-binding protein (LGBP) gene from the pacific abalone Haliotis discus hannai (HDH), which is involved in the pattern recognition mechanism and plays avital role in the defense mechanism of invertebrates immune system. The HDH-LGBP cDNA consisted of a 1263-bp open reading frame (ORF) encoding a polypeptide of 420 amino acids, with a 20-amino-acid signal sequence. The molecular mass of the protein portion was 45.5 kDa, and the predicted isoelectric point of the mature protein was 4.93. Characteristic potential polysaccharide binding motif, glucanase motif, and β-glucan recognition motif were identified in the LGBP of HDH. We used its polysaccharide-binding motif sequence to design two novel antimicrobial peptide analogs (HDH-LGBP-A1 and HDH-LGBP-A2). By substituting a positively charged amino acid and amidation at the C-terminus, the pI and net charge of the HDH-LGBP increased, and the proteins formed an α-helical structure. The HDH-LGBP analogs exhibited antibacterial and antifungal activity, with minimal effective concentrations ranging from 0.008 to 2.2 μg/mL. Additionally, both were toxic against human cervix (HeLa), lung (A549), and colon (HCT 116) carcinoma cell lines but not much on human umbilical vein cell (HUVEC). Fluorescence-activated cell sorter (FACS) analysis showed that HDH-LGBP analogs disturb the cancer cell membrane and cause apoptotic cell death. These results suggest the use of HDH-LGBP analogs as multifunctional drugs. View Full-Text
Keywords: antimicrobial peptide; cytotoxic peptide; lipopolysaccharide- and β-1,3-glucan binding protein; Haliotis discus hannai antimicrobial peptide; cytotoxic peptide; lipopolysaccharide- and β-1,3-glucan binding protein; Haliotis discus hannai
►▼ Show Figures 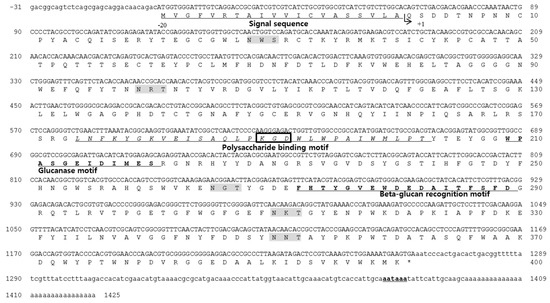