Previous studies had identified novel antimicrobial peptides derived from witch flounder. In this work, we extended the search for the activity of peptide that showed antibacterial activity on clinically isolated bacterial cells and bacterial biofilm. Pseudomonas aeruginosa was obtained from otitis media and cholelithiasis patients, while Staphylococcus aureus was isolated from otitis media patients. We found that synthetic peptide NRC-16 displays antimicrobial activity and is not sensitive to salt during its bactericidal activity. Interestingly, this peptide also led to significant inhibition of biofilm formation at a concentration of 4–16 μM. NRC-16 peptide is able to block biofilm formation at concentrations just above its minimum inhibitory concentration while conventional antibiotics did not inhibit the biofilm formation except ciprofloxacin and piperacillin. It did not cause significant lysis of human RBC, and is not cytotoxic to HaCaT cells and RAW264.7 cells, thereby indicating its selective antimicrobial activity. In addition, the peptide’s binding and permeation activities were assessed by tryptophan fluorescence, calcein leakage and circular dichroism using model mammalian membranes composed of phosphatidylcholine (PC), PC/cholesterol (CH) and PC/sphingomyelin (SM). These experiments confirmed that NRC-16 does not interact with any of the liposomes but the control peptide melittin did. Taken together, we found that NRC-16 has potent antimicrobial and antibiofilm activities with less cytotoxicity, and thus can be considered for treatment of microbial infection in the future. View Full-Text
Keywords: fish peptide; NRC-16; antimicrobial peptide; antibiofilm peptide; eukaryotic membrane; phosphatidylcholine; cholesterol; sphingomyelin fish peptide; NRC-16; antimicrobial peptide; antibiofilm peptide; eukaryotic membrane; phosphatidylcholine; cholesterol; sphingomyelin
►▼ Show Figures 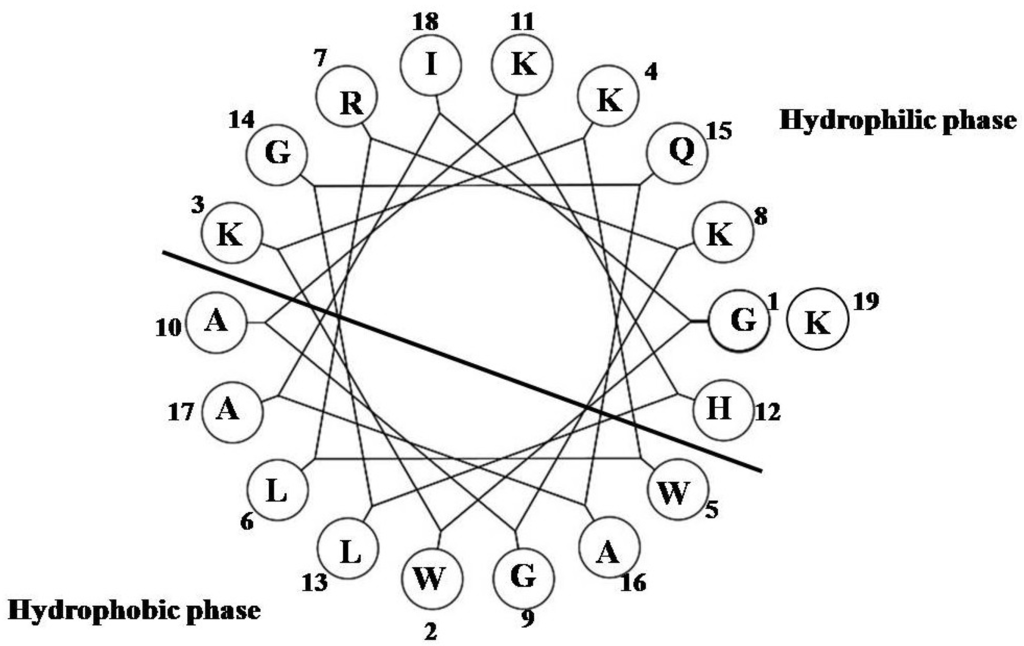