Fucoxantin: A Treasure from the Sea
Previous Article in Journal

Marine algae are known to contain a wide variety of bioactive compounds, many of which have commercial applications in pharmaceutical, medical, cosmetic, nutraceutical, food and agricultural industries. Natural antioxidants, found in many algae, are important bioactive compounds that play an important role against various diseases and ageing processes through protection of cells from oxidative damage. In this respect, relatively little is known about the bioactivity of Hawaiian algae that could be a potential natural source of such antioxidants. The total antioxidant activity of organic extracts of 37 algal samples, comprising of 30 species of Hawaiian algae from 27 different genera was determined. The activity was determined by employing the FRAP (Ferric Reducing Antioxidant Power) assays. Of the algae tested, the extract of Turbinaria ornata was found to be the most active. Bioassay-guided fractionation of this extract led to the isolation of a variety of different carotenoids as the active principles. The major bioactive antioxidant compound was identified as the carotenoid fucoxanthin. These results show, for the first time, that numerous Hawaiian algae exhibit significant antioxidant activity, a property that could lead to their application in one of many useful healthcare or related products as well as in chemoprevention of a variety of diseases including cancer. View Full-Text
Keywords: antioxidant activity; algae; Hawaii; Turbinaria; carotenoids; fucoxanthin; chemoprevention antioxidant activity; algae; Hawaii; Turbinaria; carotenoids; fucoxanthin; chemoprevention
►▼ Show Figures 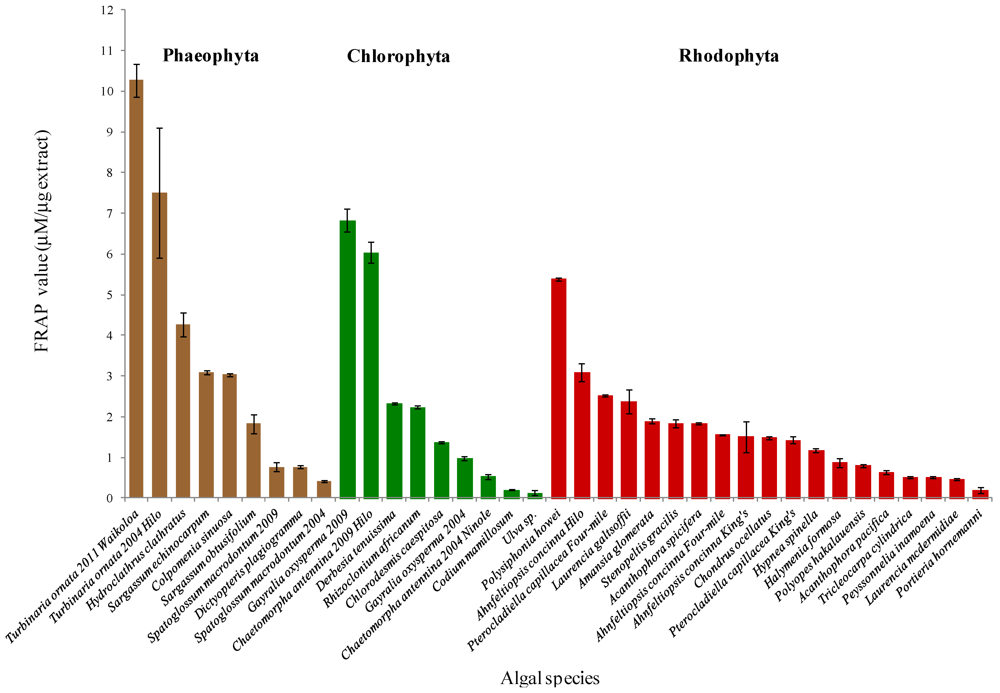