:
It is generally accepted that citrate or the A-form of acid-citrate-dextrose (ACD-A) are suitable for preparing platelet-rich plasma (PRP) for regenerative therapy. However, this is based on evidence from blood transfusions and not from regenerative medicine. Thus, we examined the effects of anticoagulants, such as ACD-A, ethylenediaminetetraacetic acid (EDTA), and heparin, on the regenerative quality of PRP to address this gap. The blood samples were collected in the presence of anticoagulants and were processed to prepare pure-PRP. Platelet size, activation status, and intra-platelet free Ca2+ concentration were determined while using a hematology analyzer and flow cytometer. Platelet-derived growth factor-BB (PDGF-BB) was quantified while using an ELISA. In pure-PRP samples, EDTA caused platelet swelling and activation, but yielded the highest number of platelets. Heparin aggregated platelets and disturbed the overall counting of blood cells. However, no significant differences in PDGF-BB levels were observed among the anticoagulants tested. Moreover, when considering the easy preparation of platelet suspensions, without the need for high-level pipetting skills, these findings suggest the comparable potency of EDTA-derived pure-PRP in tissue regeneration and support the use of EDTA in the preparation of pure-PRP. Further in vivo studies are required in animal models to exclude the possible negative effects of including EDTA in pure-PRP preparations.
Keywords:
anticoagulants; EDTA; ACD-A; heparin; platelets; platelet-rich plasma; PDGF

The development and clinical use of platelet-rich plasma (PRP) is undoubtedly an outstanding innovation and it has markedly impacted regenerative medicine. PRP has been increasingly used in various fields of regenerative therapy to date since the first report appeared in 1998 [1]. In parallel, several in-vitro studies that were performed by our group and others have provided evidence to support its clinical application [2,3,4,5,6,7]. However, its academic value has not been highly considered. A major reason for this paradoxical evaluation is due to the low predictable clinical outcomes of PRP. Several randomized controlled trials (RCT) have been performed while using PRP; however, all of the evaluations contradict each other, especially in bone regeneration. In addition, different or unexpected clinical outcomes have been superficially explained by individual differences in terms of both PRP potency and host site conditions. We think that there are three probable reasons for this: (1) application cases are scarcely selected, (2) PRP preparation quality is rarely assured, and (3) PRP action mode is considerably complicated to be revealed clearly.
As PRP is considered to be a type of adjuvant therapy [8], its clinical outcomes could be majorly influenced by the regenerative potential of each individual and prior or simultaneous medication or surgical treatments. These factors are rarely modified to make them compatible with PRP therapy, whereas PRP quality can be considerably optimized by clinicians in clinical settings. In this context, the term “PRP quality” that we have used in our previous and present studies can be tentatively defined as “the basic concept underlying the maximization of PRP therapy predictability”. However, it is poorly understood which factors, such as platelet counts, platelet functional activity, and inclusion of leukocytes, primarily influence “PRP quality”. Thus, further investigation should be performed to affirm or modify this definition and eventually establish a practical basis for PRP quality assurance and control. We have provided a supplemental explanation of “PRP quality” in the Discussion section.
It is difficult to perform large-scale RCTs and obtain convincing evidence without any stable quality assurance and control. Based on this concept, in the past several years, we have studied PRP preparation quality control and standardization [8,9,10,11,12]. Recently, several impact articles have been published to emphasize the necessity of PRP standardization, including platelet-rich fibrin (PRF) standardization [13,14,15,16,17,18,19,20,21,22]. However, some concerns, such as the operator skill being the most influential factor for PRP quality during manual PRP preparation, are yet to be addressed.
Several medical societies have attempted to formulate PRP preparation guidelines. Harrison et al. (2018) recently surveyed the consciousness of clinicians toward PRP preparation and therapy [23]. Clinician consciousness toward anticoagulants, especially EDTA use, exceeded expectations. Although citrate-based anticoagulants have been generally used for blood transfusion [24], and Marx (2001) and Anitua et al. (2016) recommended using citrate or A-form of acid-citrate-dextrose (ACD-A) as an anticoagulant for preparing PRP [25,26], Harrison et al. (2018) reported that ~20% subjects think that EDTA is more preferable than citrate or ACD-A for PRP preparation [23].
It is thought that anticoagulants that are suitable for PRP preparation should be minimally harmful against cells or tissues surrounding the implantation sites. In addition, such adverse effects should be reversible, even if occurring after implantation. All of the anticoagulants used in this study are used as medications in clinical settings. Thus, it can be assumed that when administered at an appropriate dose, these anticoagulants are safe and they cause no recognizable adverse effects on the surrounding tissues. In this study, we aimed to compare the quality of pure-PRP samples prepared from whole-blood samples that were anticoagulated with various anticoagulants and examined their size, activation status, and intra-platelet free Ca2+ concentrations using an automated hematology analyzer and a flow-cytometer (FCM). We also quantified the platelet-derived growth factor-BB (PDGF-BB) as a representative growth factor in PRP treatment while using ELISA. This study focuses on a fundamental, but probably long misunderstood, topic in regenerative dentistry.

The blood samples were collected from 15 non-smoking healthy volunteers aged 26 to 72 years. Peripheral blood (~7 mL) was collected in three different plastic vacuum blood collection tubes (Venoject II; Terumo, Tokyo, Japan) containing (1) 1 mL ACD-A (2.20 w/v% sodium citrate, 0.90 w/v% citrate, 2.20 w/v% glucose) (Terumo, Tokyo, Japan), (2) EDTA powder (contained in Venoject II; Terumo), and (3) heparin-coated films (contained in Venoject II; Terumo). The whole-blood samples were gently mixed by repeated gentle agitation and then stored at 22–25 °C for up to 24 h. The whole-blood samples were then centrifuged at 472× g for 10 min (1st soft spin) using a centrifuge equipped with swing rotor (KS-5000; Kubota, Tokyo, Japan) at 22–25 °C and the upper plasma fractions were again centrifuged at 984× g for 5 min (2nd hard spin) while using a centrifuge that was equipped with an angle rotor (Sigma 1-14; Sigma Laborzentrifugen GmbH, Osterode am Harz, Germany) at 22–25 °C The platelet pellets were gently resuspended in 250 μL supernatant acellular plasma and 50 μL platelet suspension, i.e., pure-PRP, were used to determine blood cell counts. The remaining was stored at −80 °C until use for ELISA.
For FCM analysis (see below), the platelet pellets were suspended in phosphate buffer saline (PBS) containing 0.1% bovine serum albumin (BSA) to obtain a 40–60 × 104 platelets/μL solution. Notably, a single operator prepared all of the PRP samples.
The ethics committee for human participants at the Niigata University School of Medicine approved the study design and consent forms for all procedures (Niigata, Japan, project code: 2297, approved on 14 October 2015) and complied with the Helsinki Declaration of 1964, as revised in 2013. We have got the written informed consent from the patient.

In a previous study [27], we found that 24-h storage of ACD-A-anticoagulated whole blood samples did not significantly reduce the quality of platelet-rich fibrin. Thus, we stored the whole-blood samples for up to 24 h with appropriate agitation to compare the effects of EDTA with those of ACD-A. As described previously [10,28], platelet suspensions were prepared and treated with CaCl2 (0.1% at the final concentration) in polypropylene sample tubes for 10 min After incubation, the platelets were fixed with ThromboFix (Beckman-Coulter, Brea, CA, USA) for 30 min The platelets were then washed with PBS and simultaneously probed with phycoerythrin-conjugated mouse monoclonal anti-CD41 and fluorescein isothiocyanate-conjugated anti-CD62P antibodies (5 μL per 100 μL sample) (BioLegend, San Diego, CA, USA) for 50 min at room temperature. Mouse IgG1 (BioLegend) was employed for isotype controls. After washing twice with PBS, the platelets were analyzed on an FCM (Cell Lab Quanta SC; Beckman-Coulter Inc., Brea, CA, USA). Data were analyzed while using the FlowJo software (FlowJo LLC, Ashland, OR, USA).

As described above, 100 μL platelet suspensions were prepared from whole-blood samples that were stored with gentle agitation for 24 h at room temperature and in 0.1% BSA-containing PBS. Platelet suspensions were then treated with 5 μg/mL Fluo4-AM (Dojin, Kumamoto, Japan) [29] for 30 min and directly subjected to flow-cytometric analysis [30,31] at 488 nm/535 nm (excitation/emission).

2.5. Determination of PDGF-BB Levels by ELISA

Pure PRP preparations were prepared from whole-blood samples stored for 24 h and then stored at −80 °C until use. After thawing and diluting the samples with PBS, PDGF-BB concentrations were determined while using human PDGF-BB Quantikine ELISA kits (R&D Systems Inc., Minneapolis, MN, USA) [7]. We did not activate platelets before freezing in this study; however, we preliminarily conformed that the freeze-thawing process could release growth factor stored in platelets. With respect to the dilution of the samples, the PDGF-BB levels in whole-blood samples were diluted by 1.2-fold only in the case of ACD-A. Furthermore, the pure-PRP samples that were prepared from the anticoagulated blood samples were diluted by a factor of 50 with PBS.

The data are expressed as the mean ± standard deviation (SD) (Figure 1 and Figure 2) or by box plots (Figure 3, Figure 4, Figure 5, Figure 6 and Figure 7). For multigroup comparisons, statistical analyses were conducted to compare the mean values by one-way analysis of variance (ANOVA), followed by Tukey’s multiple-comparison test (SigmaPlot 12.5; Systat Software, Inc., San Jose, CA, USA). Differences with p values of <0.05 were considered to be statistically significant.

This research was funded by JSPS KAKENHI (Grant Number 18K09595). 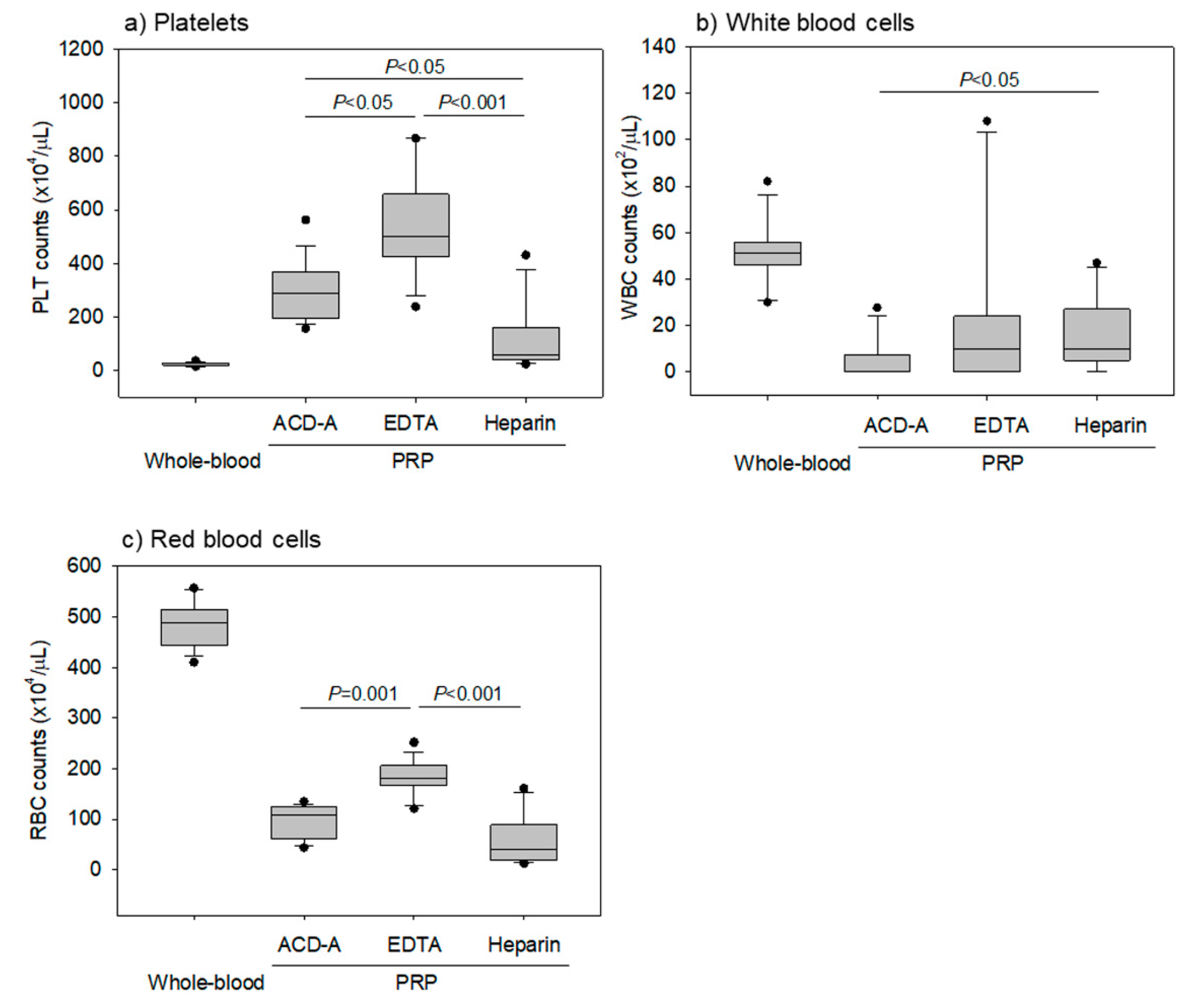 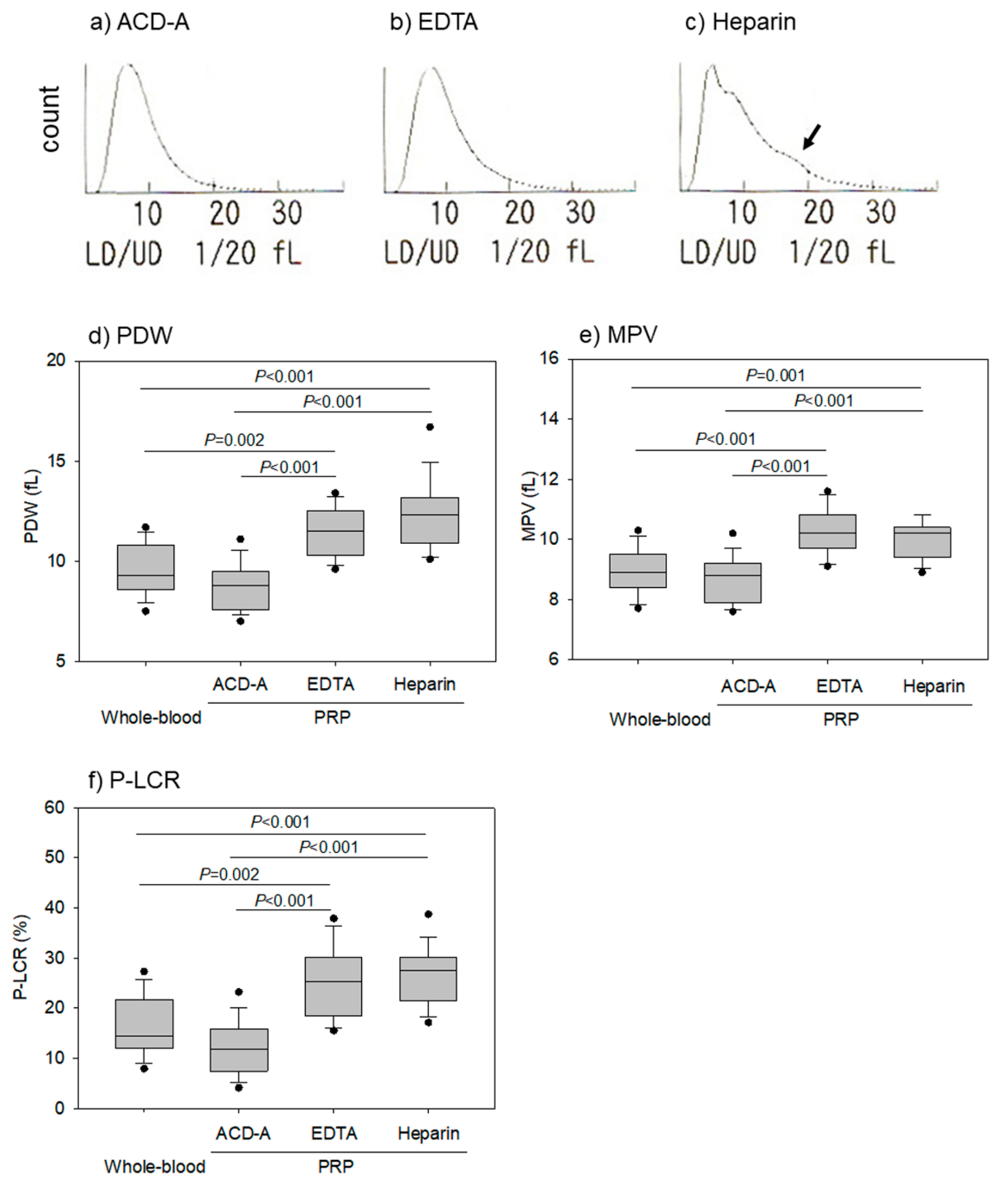 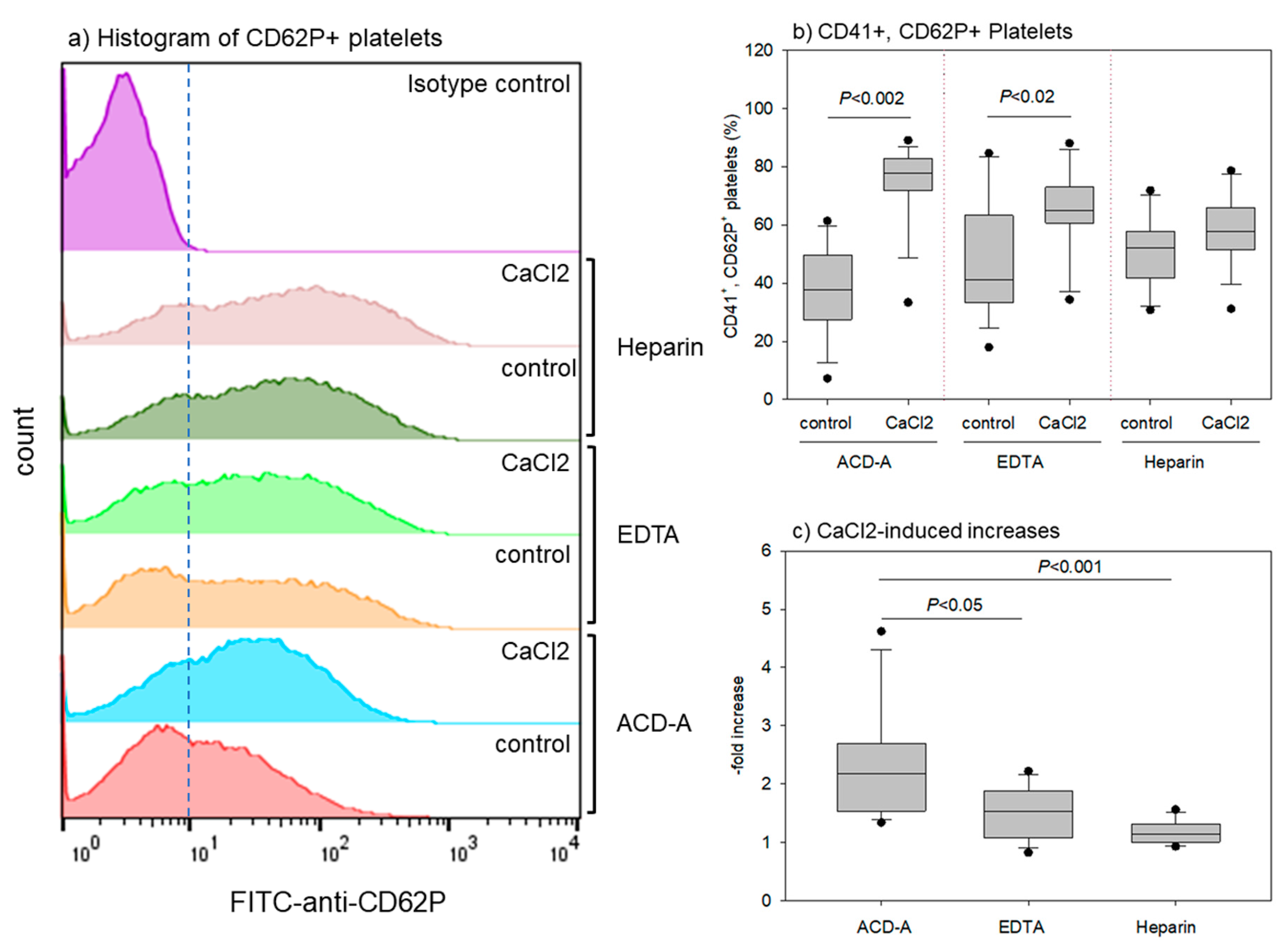 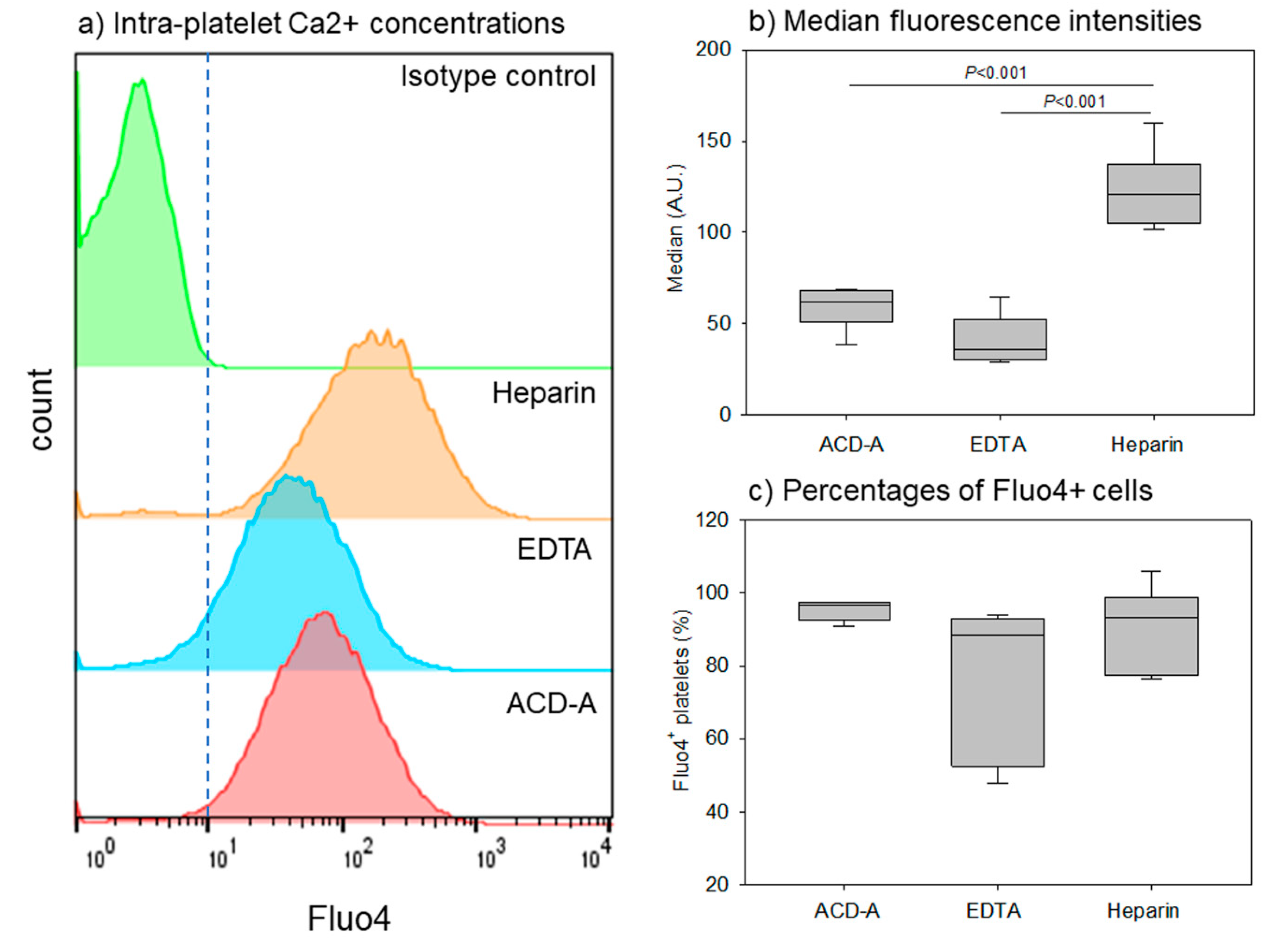