Anorexia nervosa (AN) is a severe eating disorder affecting primarily female adolescents and younger adults. The energy deprivation associated with AN has been shown to alter lipoprotein metabolism, which may affect cardiovascular risk. However, the mechanisms leading to alterations in the composition, structure, and function of lipoproteins in AN patients are not well-understood yet. Here, we investigated the lipid abnormalities associated with AN, particularly changes in the distribution, composition, metabolism, and function of lipoprotein subclasses. In this exploratory study, we analyzed serum samples of 18 women diagnosed with AN (BMI < 17.5 kg/m2) and 24 normal-weight women (BMI from 18.5–24.9 kg/m2). Using the Quantimetrix Lipoprint® system, we determined low-density lipoprotein (LDL) subclass distribution, including quantitative measurements of very low-density lipoprotein (VLDL), intermediate density lipoprotein (IDL) and high-density lipoprotein (HDL) subclass distribution. We quantified the most abundant apolipoproteins of HDL and assessed lecithin-cholesterol acyltransferase (LCAT) and cholesteryl-ester transfer protein (CETP) activities. In addition, anti-oxidative capacity of apoB-depleted serum and functional metrics of HDL, including cholesterol efflux capacity and paraoxonase activity were assessed. The atherogenic lipoprotein subclasses VLDL and small LDL particles were increased in AN. Levels of VLDL correlated significantly with CETP activity (rs = 0.432, p = 0.005). AN was accompanied by changes in the content of HDL-associated apolipoproteins involved in triglyceride catabolism, such as apolipoprotein C-II (+24%) and apoA-II (−27%), whereas HDL-associated cholesterol, phospholipids, and triglycerides were not altered. Moreover, AN did not affect HDL subclass distribution, cholesterol efflux capacity, and paraoxonase activity. We observed a shift to more atherogenic lipoprotein subclasses in AN patients, whereas HDL functionality and subclass distribution were not altered. This finding underpins potential detrimental effects of AN on lipid metabolism and the cardiovascular system by increasing atherosclerotic risk factors. View Full-Text
Keywords: anorexia nervosa; lipoprotein subclasses; VLDL; small LDL particles; HDL function CETP; LCAT anorexia nervosa; lipoprotein subclasses; VLDL; small LDL particles; HDL function CETP; LCAT
►▼ Show Figures 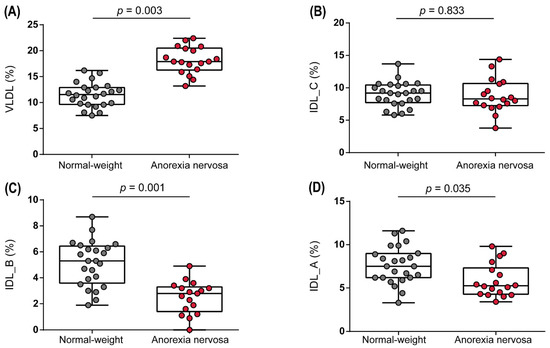