Surgical Management of Valvular Heart Disease in Mucopolysaccharidoses: A Review of Literature

It has long been recognized that in some people substantially increasing dietary intake of salt increases blood pressure, whereas in others, increased salt intake has little or no effect on blood pressure. Although the blood pressure response to salt is a continuous variable and the trait of salt sensitivity, such as that of hypertension, is arbitrarily defined, it has been estimated that 30% to 50% of hypertensive humans are salt sensitive and approximately 25% of normotensive humans are salt sensitive [1,2]. Salt sensitivity confers an increased risk for the occurrence of hypertension and cardiovascular disease. Furthermore, pathophysiological mechanisms mediating salt sensitivity may contribute to the risk for cardiovascular disease beyond their effects on blood pressure [3]. Accordingly, the mechanisms of salt sensitivity continue to be studied intensively with the hope that better understanding of those mechanisms could lead to improved approaches to the prevention and treatment of salt-induced increases in blood pressure and cardiovascular disease.
Recent studies in humans and rats provided evidence that Na+ could be stored in the body, mainly in the skin, without a parallel water retention to buffer free extracellular Na+ [4,5]. Some investigators have proposed that accumulation of Na+ in skin tissue may influence blood pressure responses to changes in salt intake [6]. However, it is not known how Na+ accumulation in the skin predisposes to salt-sensitive hypertension. It is possible that the amount of Na+ stored in skin tissue may regulate blood pressure by influencing the extent to which a high salt intake affects blood volume and cardiac output, and vascular resistance, or both. For example, it is possible that increased accumulation of Na+ in skin may affect the skin microcirculation and reduce skin blood capillary density. Skin blood capillary rarefaction, the reduction in the density of capillaries, has been associated with hypertension [7,8,9]. Capillary rarefaction is believed to mediate blood pressure changes by altering peripheral vascular resistance. He et al. [10] showed that in hypertensive humans, a modest reduction in salt intake increased dermal capillary density. The mechanisms whereby salt causes changes in the skin microcirculation remain unclear. The spontaneously hypertensive rats (SHR) are salt sensitive when compared to Brown Norway (BN-Lx) rats [11], however, the role of tissue Na+ accumulation in the pathogenesis of salt sensitivity was not analyzed in this animal model. In the current study, we tested the hypothesis that Na+ accumulation in the skin may lead to blood capillary rarefaction and increased peripheral resistance and salt sensitivity in the SHR. In addition, we performed gene expression profiling in the skin to search for genes and pathways regulating dermal Na+ accumulation and angiogenesis.

We used 10-week-old males from SHR/OlaIpcv and BN-Lx/Cub strains (hereafter referred to as SHR and BN-Lx). The SHR/OlaIpcv (Rat Genome Database ID 631848) and BN-Lx/Cub (Rat Genome Database ID 61113) strains were obtained from the animal facility of the Institute of Physiology, Czech Academy of Sciences. The SHR/OlaIpcv strain was transferred to the Institute of Physiology from Olac, Ltd. Bicester, UK and is a substrain of the SHR/N inbred strain from NIH. BN-Lx/Cub is a substrain of the originally sequenced BN/NHsdMcwi strain (RGD ID 61498). In addition, it is a congenic strain carrying a segment of chromosome 8 from the PD/Cub (Polydactylous) strain with the Lx (Polydactly luxate syndrome) mutation, coded by the mutatnt Zbtb16 gene [12,13]. We used young adult rats because our earlier experiments showed that at this age BN-Lx and SHR strains clearly differ in their blood pressure and salt sensitivity [11]. Rats had free access to standard diet (Sniff® R-Z, Soest, Germany) containing 0.25% Na+ and water and they were held under humidity- and temperature-controlled conditions on a 12–12-h light-dark cycle. All animal experiments were conducted in compliance with the Animal Protection Law of the Czech Republic and were approved by the Ethics Committee of the Institute of Physiology, Czech Academy of Sciences, Prague (protocol code 71/2015).

Intestines and stomach were completely removed from rats to exclude remains of chow. The skins, gastrocnemius muscles, and carcasses (body without skin, intestines and stomach) were weighed to determined wet weight (WW) and then desiccated at 105 °C for 36 h to determine dry weight (DW). The difference between WW and DW is considered as tissue water content. Ashing of carcasses was performed at 200 °C and 450 °C for 20 h at each temperature level, and the bones were sieved from the carcass ashes. Ashing of skins was performed at 200 °C and 450 °C for 10 h at each temperature level. Ashes were sent for analysis of Na+ and K+ concentrations by atomic adsorption spectrometry to ALS Czech Republic, Ltd. (Prague, Czech Republic). Cl− concentrations in the ashes were measured by titration with 0.1 N silver nitrate in the State Veterinary Institute (Prague, Czech Republic). Since the body weights of SHR and BN-Lx strains are significantly different, all chemical parameters in tissues are expressed as relative values corrected to dry weights and in the case of relative water content to wet weights. We also calculated Na+-to-water, K+-to-water, and (Na++K+)-to-water ratios. Parallel increases in skin Na+-to-water and skin (Na++K+)-to-water ratios indicate increased Na+ cation abundance relative to water and hence osmotically inactive Na+ storage in the skin.

2.5. Number of Blood and Lymph Capillaries

Results are expressed as means ± S.E.M. SigmaPlot® 12 software package was used for two-way ANOVA to test for strain x salt interactions. For variables showing evidence of strain x salt interaction effects, we used Holm Sidak testing that adjusts for multiple comparisons to determine whether the effects of salt were significant in SHR versus BN-Lx rats.

Figure 2 shows fluid ingestion and cumulative Na+ balance in SHR and BN-Lx rats drinking ad libitum either tap water or salt solution. As can be seen, on high salt diet the SHR ingested significantly more salt solution and exhibited significantly higher cumulative Na+ balance when compared to BN-Lx rats. These differences remained significant when the ingested fluid was corrected to body weight (data not shown). These observations suggest that increased Na+ accumulation in the skin of SHR rats might be due to increased salt ingestion.

We measured number of blood capillaries in the skin of BN-Lx and SHR rats on normal or high salt intake. Two-way ANOVA showed significant strain x salt interaction effects on blood capillary number in the skin. As can be seen in Figure 3A, BN-Lx rats after salt treatment exhibited significantly increased skin blood capillary number contrary to SHR rats. On the hand, we observed no significant differences in the number of lymph capillaries between BN-Lx and SHR strains and between control and high salt intake (Figure 3B). Figure 4 shows representative histological images of blood and lymphatic capillaries.

3.5. Gene Expression Profiles in the Skin

To search for molecular mechanisms responsible for differences in Na+ accumulation in the skin and salt-dependent hypertension, we performed analysis of gene expression profiles using RNAseq method in response to salt loading in BN-Lx and SHR strains (Table 3 and Table 4). Gene set enrichment analysis (GSEA) on biological processes (BP) in BN-Lx rats identified as the most significantly up-regulated genes involved in regulation of angiogenesis and proliferation of endothelial cells (Table 3). On the other hand, in the SHR after salt treatment, GSEA on BP identified as the most significantly up-regulated genes involved mainly in regulation of keratinocyte differentiation and epidermis development, negative regulation of peptidase activity and innate immunity (Table 4).

Results of the current study showed that salt-sensitive hypertension in the SHR is associated with increased storage of osmotically inactive Na+ in the skin and skin capillary rarefaction when compared to normotensive, salt-resistant BN-Lx rats. Since the skin harbors most of the body’s resistance vessels it is possible that blood capillary rarefaction may lead to increased peripheral resistance and thus represent new mechanism of salt sensitivity in the SHR.

The following supporting information can be downloaded at: https://www.mdpi.com/article/10.3390/biomedicines10020376/s1, Figure S1: Principal component analysis based on expression of 500 genes with highest variance.

This research was funded by Academic premium (Praemium academiae) AP1502 grant from the Czech Academy of Sciences.

The animal study protocol was approved by the Ethics Committee of Institute of Physiology, Czech Academy of Sciences, Prague (protocol code 71/2015). 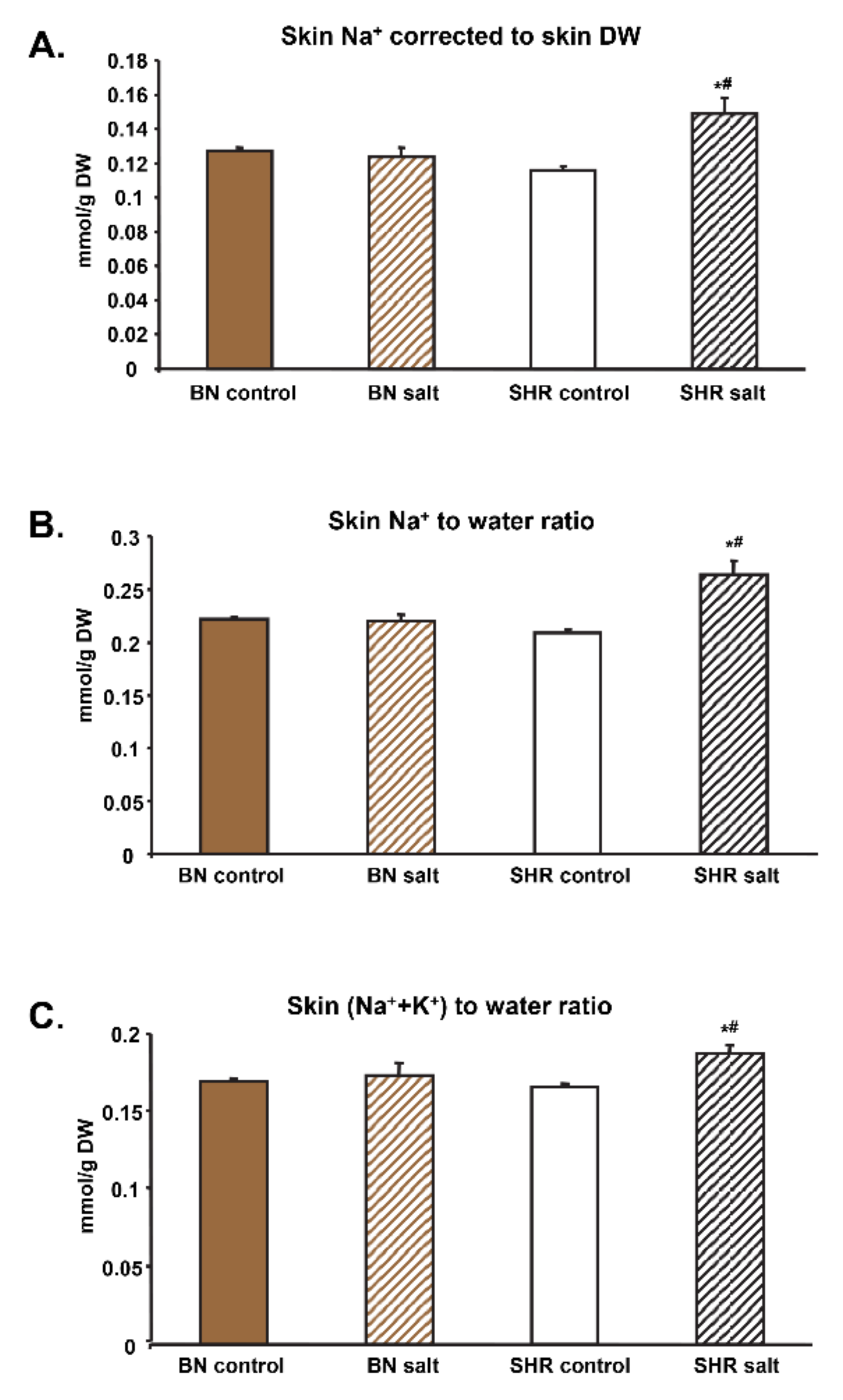