Sonic Hedgehog (Shh) coordinates Zn2+ in a manner that resembles that of peptidases. The ability of Shh to undergo autoproteolytic processing is impaired in mutants that affect the Zn2+ coordination, while mutating residues essential for catalytic activity results in more stable forms of Shh. The residues involved in Zn2+ coordination in Shh are found to be mutated in some individuals with the congenital birth defect holoprosencephaly, demonstrating their importance in development. Highly conserved Shh domains are found in parts of some bacterial proteins that are members of the larger family of DD-peptidases, supporting the notion that Shh acts as a peptidase. Whereas this Hh/DD-peptidase motif is present in Hedgehog (Hh) proteins of nearly all animals, it is not present in Drosophila Hh, indicating that Hh signaling in fruit flies is derived, and perhaps not a good model for vertebrate Shh signaling. A sequence analysis of Hh proteins and their possible evolutionary precursors suggests that the evolution of modern Hh might have involved horizontal transfer of a bacterial gene coding of a Hh/DD-peptidase into a Cnidarian ancestor, recombining to give rise to modern Hh. View Full-Text
Keywords: Sonic Hedgehog; bacterial Hedgehog; Drosophila Hedgehog; Zn2+ peptidase; DD-peptidase; Hedgehog evolution Sonic Hedgehog; bacterial Hedgehog; Drosophila Hedgehog; Zn2+ peptidase; DD-peptidase; Hedgehog evolution
►▼ Show Figures 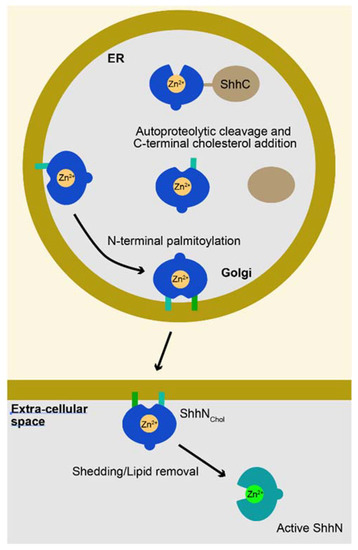