Some Parents Are More Equal than Others: Discrimination against People with Disabilities under Adoption Law

Tax Policy in Action: 2016 Tax Amnesty Experience of the Republic of Indonesia

Tax is a major source of revenue for many countries, including Indonesia. Tax in Indonesia has three main functions; it is the source of state income, it is a tool of policy regulation, and it is a means of income redistribution (Direktorat Jenderal Pajak 2013). Based on data from the Ministry of Finance of the Republic of Indonesia, tax is the largest contributor to Indonesia’s revenue budget, where almost 75% of Indonesia’s income comes from taxes (Ministry of Finance of Republic of Indonesia 2017). The tax potential in Indonesia is actually very large, because Indonesia has 261 million inhabitants, and as many as 124 million of these inhabitants are in a productive age category (Badan Pusat Statistik 1986–2017). Nevertheless, only 10.1 million people are registered as taxpayers and pay their taxes on a regular basis (Direktorat Jenderal Pajak 2017a). The low number of taxpayers when compared with the productive age of the population of Indonesia means that the Indonesian government is not maximizing the potential revenue from taxation. This has led to constraints in infrastructure development in Indonesia, and to an increase in Indonesia’s foreign debt.
The main cause of the low number of taxpayers in Indonesia is the widespread practice of tax evasion and tax avoidance. One of the most popular ways to achieve this is to hide income from tax officials in Indonesia or to transfer the wealth abroad, so it is not detected by tax officials. Tax evasion and tax avoidance are widespread in Indonesia, and result in a lack of state revenues from the tax sector. The lack of tax revenues has, in turn, hampered infrastructure development planned by the Indonesian government because the government has insufficient funds.
To encourage taxpayers to pay taxes within a short time frame, the Indonesian government launched a tax amnesty and repatriation of assets program, which took place between July 2016 and March 2017. The objective for implementing the tax amnesty program was to boost the income generated from taxes in the state budget. As the country’s income increased, the Indonesian government planned to increase its spending on infrastructure development, as well as on improving people’s welfare. The tax amnesty program was also aimed at improving the stability of Indonesia’s macro economy through the repatriation of assets from abroad to Indonesia. The repatriation of assets would directly increase Indonesia’s foreign exchange reserves and strengthen the economic fundamentals of Indonesia. However, the tax amnesty program, as envisioned by the Indonesian government, included some fundamental flaws, and potentially violates other laws in Indonesia.
This article will discuss the policy in Indonesia that permits tax amnesty and the criticism of this policy. The article is divided into two sections, aside from the introduction and conclusion. Section 2 discusses the tax amnesty policy in Indonesia in general and the law that implements the tax amnesty program. Section 3 discusses the criticism of the tax amnesty program and provides an example of its fundamental shortcomings.

Furthermore, to avoid taxes, the taxpayers in Indonesia often move and invest funds abroad. The main countries that Indonesian taxpayers transfer their money to are Singapore, Hong Kong, Malaysia, Macau, Luxembourg, Switzerland, Cayman Islands and other tax haven countries (Directorate General of Taxation of the Republic of Indonesia 2016). For example, the Figure 1 below explains that, in 2016, a total of 250 billion US Dollars owned by Indonesia’s high net worth individuals (“HNWIs”) was stored outside of Indonesia. A total of 200 billion US Dollars of wealth was kept in Singapore, as can be seen in bar 3, and as much as 50 billion USD was kept in other countries, such as Hong Kong, Malaysia, Macau, Luxembourg and Cayman Island. From the total wealth of Indonesia’s HNWIs, almost 50 billion US Dollars were deposited on non-investable assets, such as real estate, and the remaining 150 billion US Dollars was invested in investable assets, such as stocks, in Singapore (Directorate General of Taxation of the Republic of Indonesia 2016). The Figure 1 below also further confirms that Singapore is the main country where the Indonesian taxpayer chooses to keep his/her wealth to avoid paying taxes.
Based on the background discussed previously, the Indonesian government enacted the Law of the Republic of Indonesia No. 11/2016 on Tax Amnesty (“Tax Amnesty Law”). The tax amnesty legislation has three objectives, among others, which are as follows (Ministry of Finance of Republic of Indonesia 2016):

(1)
To accelerate the growth and the restructuring of the economy using the repatriation of assets, which will create a positive impact such as an increase in domestic liquidity, improvement of the exchange rate of Rupiah, a decrease of financial interest, and an increase of investment.
(2)
To support the tax reform in creating a system of taxation based on justice and for the expansion of basis of data (database) of taxation, which will be more valid and comprehensive in the integration.
(3)
To increase tax revenues, which will be used for funding the development.

(1)
Indonesian Government Securities;
(2)
Bonds of State-owned Enterprise (SOE);
(3)
Bonds of financial institutions owned by the Government;
(4)
Financial investment in Perception banks;
(5)
Bonds in private company that the Financial Services Authority monitors the trading of;
(6)
Infrastructure investment through government’s cooperation with business entities;
(7)
Investment in the real sector based on the priorities set by the government through a Ministry of Finance Decree; and
(8)
Other legitimate investments in compliance with the prevailing laws and regulations.

The regulations1 contain additional details such as, for example, a provision that taxpayers who choose to repatriate their offshore assets to Indonesia will gain a profit from the investment that can be drawn every three months or when a minimum period of investment has been fulfilled (The Republic of Indonesia Finance Ministerial 2016).
The tax amnesty law also regulates the confidentiality of the data of the taxpayers who participate in the program. For example, taxpayers who participate in the program were provided with certain guarantees regarding the asset data that they gave through the program to the Directorate General of Taxes. Specifically, the taxpayer was guaranteed that the data could not be accessed or used as a database for investigation and prosecution by law enforcement such as attorney general, police, Indonesia Corruption Eradication Commission (CEC) and Indonesia Financial Transaction Reports and Analysis Centre (INTRAC) (Ministry of Finance of Republic of Indonesia 2016). To encourage taxpayers to participate in the tax amnesty program, the finance ministry also arranged threats for tax evasion and tax evaders who do not report their taxes through the tax amnesty policy scheme.
It was expected that, after the tax amnesty ended in March 2017, the Ministry of Finance and the Directorate General of Taxation would conduct an analysis of the wealth of all the registered taxpayers in Indonesia. The analysis was to be undertaken by opening the domestic banking data owned by all the taxpayers in Indonesia. The Director General of Taxes would also adopt the Organisation for Economic Co-operation and Development (OECD) policy on automatic exchange of information (AEOI), which would facilitate the Director General of Taxes’ monitoring of the assets of the Indonesian citizens who kept their assets or wealth abroad (OECD 2017). Indonesian citizens who were caught with income or assets that had not been reported to the Director General of Taxes would be subject to a 200% penalty of the amount of unpaid income tax. Currently, the process being undertaken by the Director General of Taxes is to conduct research and open customer data in domestic banks, wich will then be matched with the data owned by the Directorate General of Taxes, and checked to see whether there are violations of taxation or whether there is still a shortage of tax payments (Direktorat Jenderal Pajak 2017b).
The Indonesian government targeted a return through the tax amnesty program of around 12.4 billion US Dollars from the payment of redemption money and around 75.2 trillion US Dollars from the repatriation of assets. The result was very far from the targeted amount. After the closure of the tax amnesty program on 31st March 2017, the Indonesian government had only managed to collect 8564 billion US Dollars from the payment of redemption money and only 11,044 billion US Dollar from the repatriation of assets, as described in the Table 2.

3. Criticisms of the Tax Amnesty Program in Indonesia

3.1. Absence of a Process for Checking or Tracking the Source of Funds

3.2. Inhibition of the Development of the Whistleblower System in Indonesia

3.3. Hampering the Work Processes of Other Law Enforcement Agencies

This work was supported in by the Indonesia Endowment Fund for Education (LPDP), Ministry of Finance of the Republic of Indonesia, under Grant No. 20160712058238. 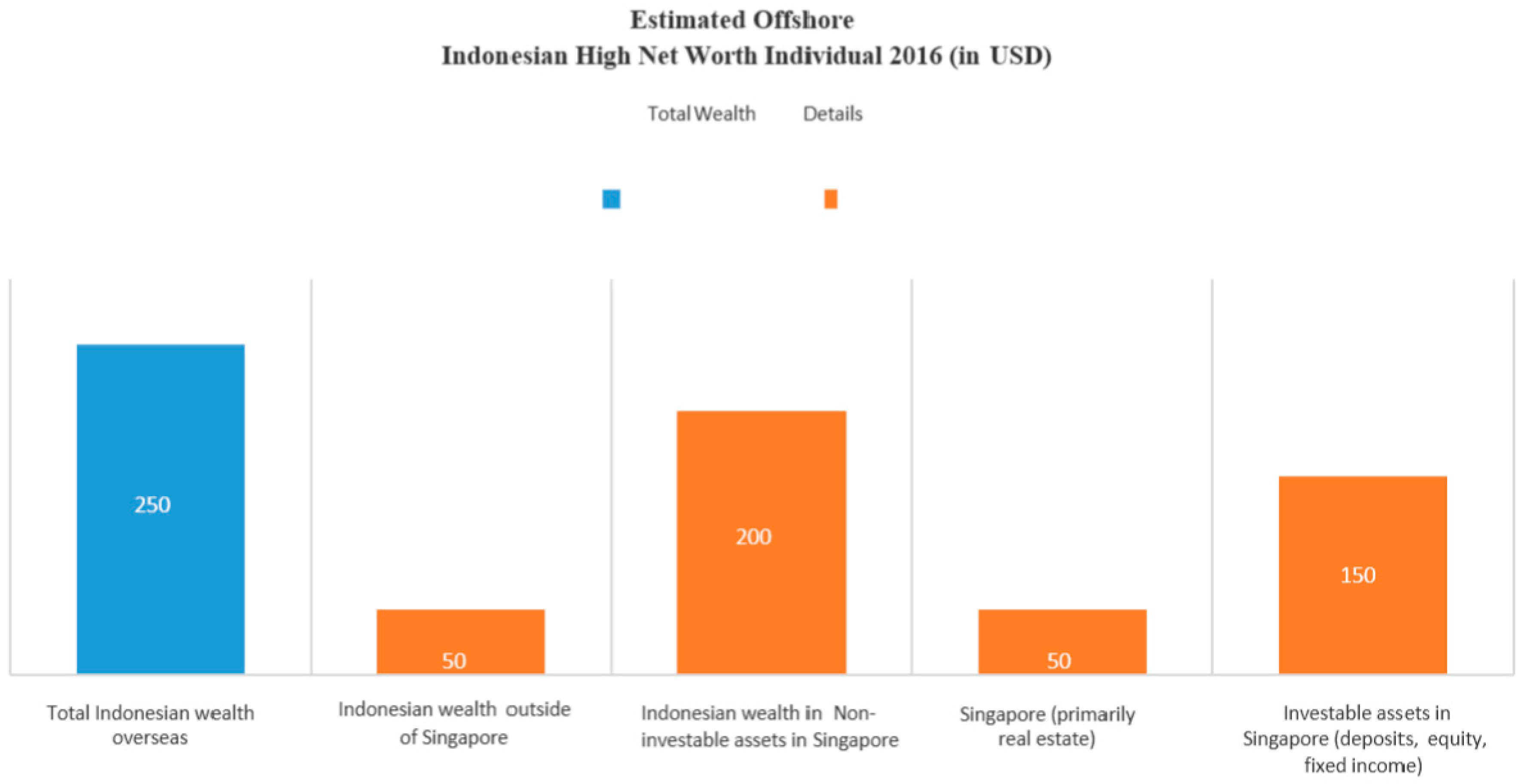