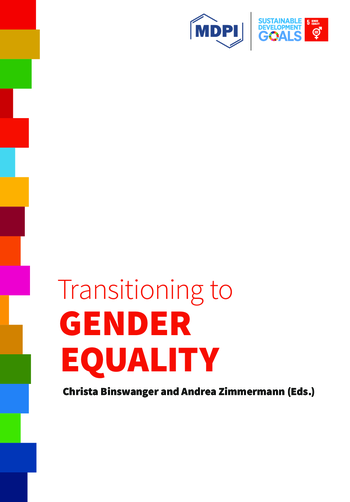 The publication has been bookmarked.

MDPI uses a print-on-demand service. Your book will be printed and delivered directly from one of three print stations, allowing you to profit from economic shipping to any country in the world. Generally, we use Premium shipping with an estimated delivery time of 7-12 business days. P.O. Boxes cannot be used as a Ship-To Address.

Please note that shipping time does not include the time for placing and processing the order or printing. For this, an additional turnaround time of 10 working days should be expected.

Gender Equality, the fifth UN Sustainable Development Goal (SDG 5), aims for the elimination of all forms of discrimination against women and girls. It thereby addresses all forms of violence, unpaid and unacknowledged care and domestic work, as well as the need for equal opportunities for leadership at all levels of decision-making in political, economic and public life.

In this volume, we focus on three main areas of inquiry, ‘Sexuality’, ‘Politics of Difference’ and ‘Care, Work and Family’, and raise the following transversal questions:

Published with the generous support of the Swiss National Science Foundation.

This book will be available in print soon.