We tested the hypothesis that concatemers of ancestral tRNAs gave rise to the 16S ribosomal RNA. We built an ancestral sequence of proto-tRNAs that showed a significant identity of 51.69% and a percentage of structural identity of 0.941 with the 16S ribosomal molecule. We also propose a hypothesis for the emergence of translation. View Full-Text
Keywords: 16S rRNA; proto-tRNAs; evolution; translation system; origins 16S rRNA; proto-tRNAs; evolution; translation system; origins
►▼ Show Figures 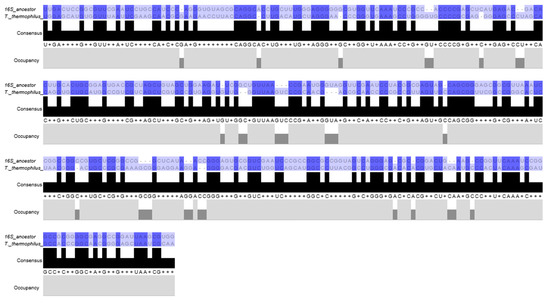 The paper by Farias, Rêgo and José, attempts to explore an interesting hypothesis

as to the origin of the ribosomal small subunit, although not in a very convincing

manner.  The main issue is, while there is some sequence similarity between their

claimed ancestral porto-tRNAs, why would a full set of  twenty amino acid associated tRNA exist before translation? And more importantly why not assume more primitive set of proto tRNA like molecules (or even the first such molecule) from which to construct the earliest from of the SSU?  Table one is thus a major problem in which they appear to be requiring a full set of twenty.

Finally as I assume these authors are aware, most structural alignments between most highly folded large RNAs can be peice wise aligned with nearly any medium sized stem loop RNA!  This is particularly true using a an lgorithm can selected from

among many smaller RNAs -- say twenty.  Also if the optimal structural alignment algorithm is allowed to aligned sub regions as short as 30 or so nucleotides as sugested from both table 1 and figure 1, from among a large set.    Note, there

as simple stem loops containing only a form of the so-called operational code.  And

originally using the Asp and Glu via a highly degenerate charging system!  Also Cys, Trp,Try and probably Phe were not even part of the earliest for of the translations (as

discussed in numbers publications of the last twenty years!

what is here porposed for the ribo-SSU and the earlier referenced related work (8,9)

for model of the ribo LSU built from similar photo-tRNAs


Dear Reviewer, Many thanks for the comments. We understand your question about the complete set of tRNAs / proto-tRNAs. However, by analyzing the similarities between all tRNAs and the smaller ribosome subunit, we are not assuming that these tRNAs, as well as their cognate amino acids, would already be incorporated into the genetic code. In this context, we are assuming that initially these tRNAs / proto-tRNAs had structural functions and not necessarily worked as adapters in the translation process. With respect to the proto-tRNAs folds individually, unfortunately this proves to be a methodological limitation, since we cannot obtain three-dimensional structures of small sequences. A discussion with previously published works has been included. We hope to have answered all questions and are available for further modifications and comments. best regards

This short publication makes a logical  hypothesis for the emergence of translation based on sequencing. The methodology could be explained in more detail (section 3) rather than by use of references .

The manuscript of Farias et al. explores the existence of remote structural and sequence homologies between tRNA and the small subunit of rRNA (16S rRNA). These homologies, which involve segments in the upper 3’ domain (the ‘head’) of the 16S rRNA molecule, are assumed to be evolutionarily deep. The study is valuable. It extends the proposal by Bloch and colleagues in the 1980s that the ribosome originated and evolved piecemeal by accretion of primordial tRNA molecules. Here is my critique and suggestions for improvement:

(1) Assumptions: The proposed remote structural and sequence homologies are established between putative ancestral tRNA sequences derived from ‘character state reconstruction’ analysis and modern rRNA molecules. However, in order to diminish the possibility of artifactual convergences, both ancient tRNA molecules and ancient rRNA molecules should have been reconstructed before endeavoring into building alignments. For example, Harish and Caetano-Anollés (PLoS One 7(3): e32776, 2012) used character state reconstructions to generate ancestral tRNA and ancestral rRNA segments encompassing the entire small and large subunits of rRNA. They then used the reconstructed sequences as queries and targets in structural and sequence alignments with RNAforester. While tRNA queries did not provide significant hits, probing with in vitro engineered L1 RNA ligase and RNA polymerase ribozymes detected statistically significant structural and sequence similarity in the most ancient segments of the rRNA molecules, including the 16S rRNA remote homology segments identified by Farias et al. These findings from a (first-of-its-kind) phylogenetic reconstruction of remote homologies represent a discrepancy with the results of this manuscript. The authors should also discuss problems introduced when aligning ancient and modern structures. What kind of biases will assumptions introduce?

(2) Methodology and findings: I found it difficult to understand how the authors performed the alignments of ancestor tRNA to modern Thermus thermopilus 16S rRNA listed in Table 1 and Figure 1. A better description is needed when introducing the methodology and later in Materials and Methods. It appears that individual ancient tRNA molecules are first aligned to rRNA. Various segments covering the 831-1499 positions of the rRNA sequence are matched. Were there multiple hits observed? If so, how were they handled? Note that Root-Bernstein and Root-Bernstein (ref. 8) found multiple hits of tRNA isoacceptors to rRNA. How distinct is their methodology? The tRNA concatemer ‘Gln…Leu’ was then produced, which then aligns to the 943-1286 positions of the rRNA sequence. While the authors state that they used “similarities in sequential positions”, they did exclude Tyr, and Lys from the sequence, which have high similarities (48.5%, 57.14%), without providing a rationale. What about the other putative tRNA homologies present towards the 5’ and 3’ regions (some with similarities as high as 50-60%)? Why were they not included in the concatemer sequence? The  831-1499 segment includes at the extreme 3’ end, helix 44, which according to Harish and Caetano-Anollés (2012) is the most ancient segment of the small subunit and the ribosome. Like the authors, Root-Bernstein and Root-Bernstein (ref. 8) also find helix 44-associated Leu tRNA homologies. Besides clarifying all the questions posed above, the authors should provide a file with the reconstructed tRNA sequences (perhaps as supplementary materials), so that others can repeat the experiments.

(3) Reference to previous work: Citing some previous work can enhance discussion of results. First, in the introduction, the work of Harish and Caetano-Anollés (2012) is not cited and is indeed relevant. Their phylogenomic reconstructions describe both the coevolution of the two rRNA subunits and the coevolution of rRNA and ribosomal proteins, prior to the co-evolutionary proposal of ref. 11. The work also explores remote homologies. Second, in page 3, the authors state that the small subunit was built from tRNA, especially the 3’ region of the molecule. The authors should comment that Root-Bernstein and Root-Bernstein (ref. 8) did find homologies to the small subunit, especially in regions homologous to the tRNA concatemer. How did the authors’ putative homologies compared to theirs? Caetano-Anollés and Caetano-Anollés (Life 6:43, 2016) mapped homologies detected in ref. 8 to old regions of the ribosome, including the small subunit and its 3’ region, proposing a timeline of their recruitment. In this regard, the phylogenomic data of Harish and Caetano-Anollés (2012) is compatible with the co-evolutionary hypothesis proposed by the authors in Figure 4. It would be interesting to discuss similarities and distinctions between alternative models. Finally, Caetano-Anollés and Caetano-Anollés (Front Mol Biosci 3:97, 2017) re-examined data from Petrov et al. (ref. 11). They describe 19 possible origins of rRNA (5 for 16S rRNA), two of which (origins 15 and 19; Figure 1) match the 943-1286 segment of 16S rRNA identified by the authors as ancestral. The existence of multiple origins defeats the algorithmic model of monolithic growth of rRNA of ref. 11. Instead, it supports the more or less haphazardous recruitment of rRNA pieces. The authors’ data supports the hypothesis that these structural recruitments involve tRNA.


Dear Reviewer, Many thanks for the comment. An analysis with the reconstruction of the 16S ancestral ribosomal sequence from modern sequences was added. A discussion on possible methodological bias was also added. A better explanation of the method used has been added, hopefully now clearer for the reader. The cited manuscripts were added in more detail in the discussion and introduction. Alignments with alternative ancestral tRNAs (Tyr and Lys) were commented and added to the supplemental material. As well, alignment at the 5 'position was added to the supplemental material and commented on in the manuscript. From the suggested references, we tried to enrich the discussion. The changes in the text are highlighted in red. We hope to have reply to all comments and suggestions and are open to further consideration. best regards