Organic Molecules: Is It Possible to Distinguish Aromatics from Aliphatics Collected by Space Missions in High-Speed Impacts?
Previous Article in Journal

Informatics and the Challenge of Determinism (Version 1, Original) 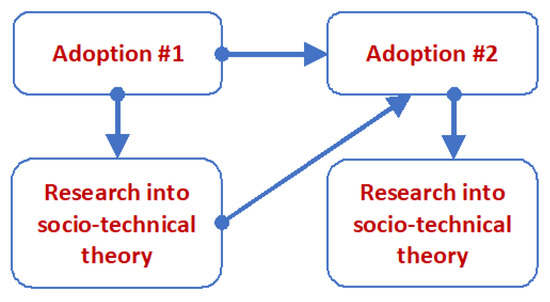 This manuscript presents an in-deep research, and allow those other researchers can use this paper as a reference for new related works. Still, the paper is well-done writing.

A few consideration is presented as below.


I have no particular preference for either form of English as both are correct and the spell-checker will identify errors based on the default language (US English ‘z’ is correct – UK English ‘s’ is correct). The issues become worse when confronted by papers from the far east which often use some very strange dictionaries. I have as suggested revised the ‘s’ to a ‘z’ in (I think) all relevant cases.
This is the most important comment and it is appreciated as it has resulted in significant revision and extension to manuscript (as noted in the response letter) and the sections addressing ISD and the directions for research where multiple additional analytic systems, project management systems, and quality certification have been introduced to address the need for policy-based strategic analysis and risk management (including deterministic risk) . Furthermore, software quality and validation has been introduced along with further research into approaches to ISD.
I have revised the section 5.4.6 with some additional discussion relating to deterministic impact to data and P2P communications driven by the advent of 5G.
I have carefully considered this comment and I have attempted to generate suitably descriptive tables setting out details of the papers identified in the paper including a single long table in an appendix). However, the discussion around the literature addressing determinism in its many forms made the tables impractical given the nature of the discussion and analysis. I appreciate the suggestion but in this case the range of topics with cited research in some cases being relevant to more than one determinist topic make a tabulated approach impractical (in fact the results were somewhat confusing.
Again, I appreciate this observation has it has resulted in significant thought and additional reading with consideration of my past work into IS and ISD including risk management and strategic / policy-based evaluation processes. Section 8 along with the section addressing ISD has been extensively revised and extended as discussed under point 2 and as noted in the response letter. There are additional sections in both the ISD sections and in Section 8 where evaluation has been considered and additional methods introduced into the manuscript

After reading (and rereading) this article and several it cites, I am unable to discern a coherent thesis or analysis within it. This conclusion generated some cognitive dissonance since by the time I was assigned to it the article had survived both bench rejection and one external reviewer. So, I reexamined it looking for a specific insight or finding that may I may have missed -- but now conclude that this article does not present a coherent argument, provide a reliable review, or report any advance of significance.

Most of the body of the article is devoted to stating the definition of terms and concepts (drawn from other sources), and enumerating examples. These appear to be connected only syntactically and tangentially, without a coherent meaning.

The article liberal use of borrowed definitions and bulleted examples serve to fill space, rather than add weight to an argument or substance to a synthesis. In contrast, the use of jargon, acronyms, citation (including frequent self-citation) in lieu of explanation, vacuous abstract diagrams, irrelevant excerpted technical figures, and empty mathematization serve to obfuscate and distract. This type of distraction is exemplified by Equation 1 in section 8.1, which appears without context, introduces vaguely defined terms and presents them in mathematical formalism, has no clear implications (another paper by the author is cited in lieu of explanation), and is promptly abandoned.

The two examples below illustrate these defects. (Note also that the typos and grammatical infelicities are verbatim, and are representative of the paper generally.)

A feature of many applications and systems (including social network platforms and marketing applications such as Amazon (Amazon: https://www.amazon.co.uk/) is the use of recommender systems (RS) [92]. RS are generally context-aware provide ‘push’ recommendations based on browsing history and expressed preferences and historical search and purchase history. Web search engines and RS are among today’s most ubiquitous, pervasive, and successful applications; for example, ‘Google’ (a noun) is also used as a verb (to ‘google’—meaning to search using a web browser over the Internet). We are increasingly reliant on such technology to search for information, ‘online’ shopping, or when we stream videos [93]. This is an example of technology ‘shaping’ society on socio-technical and socio-economic levels where the influence of technology is reflected in TD.

In Section 3, we introduced the hard, soft, and neutral determinist views. There is a perceived correlation between the textitsoft, and neutral determinist views and the rational actor, materiality, subversive rationalisation, and voluntaristic theories. The rational actor theory argues that the negative social affects may be outcomes that people deliberately intend to achieve (or) users might anticipate the medium’s risks and take steps intended to ward off negative effects. The materiality theory proposes the conflation between the material and the social with the distinction between determinism and voluntarism. There are those who adopt the view that society and/or culture interacts with, and may even contribute to, the ‘shaping’ of technologies. However, a TD view argues that technology use is largely determined by the structure of the technology. Interestingly, an inevitably thesis has been proposed [115] which states that “once a technology is introduced (into society or culture) what follows is the inevitable development of the technology”


The response has been forwarded to the editor.

The article is well structured and written, needing only a small revision to a few words in British English.

Section 5.4 should be more balanced in the detail of each of the subsections

The figures presented should have better quality and a more professional look.

In section 8 it is not clear what techniques \ methods will be used to assess the proposed ISD.


I have as suggested revised the ‘s’ to a ‘z’ in (I think) all relevant cases.
I have revised the section 5.4
There are additional sections in both the ISD sections and in Section 8 where evaluation has been considered and additional methods introduced into the manuscript

Sent on 24 Sep 2020 by M. Ali Dewan | Not approved
School of Computing and Information Systems, Faculty of Science and Technology, Athabasca University, 1 University Drive, Athabasca, AB T9S 3A3, Canada
I went through the reviewer's comments and the research article. I also agree with the reviewer's comments about the research article. The research paper does not seem to have any specific research objective. Authors did not provide any experiment and results. Novelty and contributions of this paper are not clear enough. We cannot accept the paper in its current form. I would suggest authors to clarify the research objective, research questions, the methodology that they used to achieve the research objective, and the research findings. They should also clarify their contribution and the novelty of this work.


I reject the review (see the attached rebuttal letter) which clearly has failed to understand the paper.
Zoom | Orient | As Lines | As Sticks | As Cartoon | As Surface | Previous Scene | Next Scene
We use cookies on our website to ensure you get the best experience. Read more about our cookies here.
Accept
We have just recently launched a new version of our website. Help us to further improve by taking part in this short 5 minute survey here. here.
Never show this again