It is believed that isolated subsurface structures of an infrastructure do not ventilate through opening(s) in manhole covers. The literature has almost no information on this topic. This study reports on considerations involved in the development and utilization of a method to study this question. Carbon monoxide (CO) is readily obtainable in engine exhaust, easily detectable at very low concentration, and is relatively safe to handle, which makes it ideal for use as a tracer gas. Transfer into the airspace of the structure was carried out using metal tubing. This study examined the engine operating time and the number of openings in a manhole cover. CO was measured using four instruments in the vertical profile. It was found to generally decrease in a narrow band, initially linearly through a curvilinear region and a linear tail. Clearance of most of the contaminant occurred rapidly during the first part of the process. A decrease to 25 ppm required from 439 min (7 openings) to 1118 min (1 opening). Ambient temperature and near-surface air flow likely influenced these values. The measurement profiles strongly suggest that the atmosphere in the airspace was rapidly and thoroughly well-mixed. The methodology developed and reported here is suitable for a more expanded investigation, the intent being to identify modifications of the design to optimize the process. View Full-Text
Keywords: CO; carbon monoxide; confined space; isolated subsurface structure; manhole cover; method development; natural ventilation CO; carbon monoxide; confined space; isolated subsurface structure; manhole cover; method development; natural ventilation
►▼ Show Figures 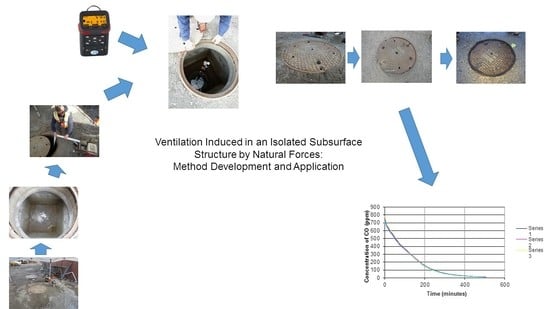