Acknowledgement to Reviewers of Vision in 2017

Restricted Spatial Windows of Visibility in Myalgic Encephalomyelitis (ME)

Myalgic encephalomyelitis (ME) is a devastating disorder marked by debilitating fatigue. It not well understood and its diagnosis is controversial. It is very important therefore that significant clinical features are investigated. Visual symptoms in ME represent a group of distinct, quantifiable, clinical features that could significantly improve diagnosis and provide insights into underlying pathology. The purpose of the present study was therefore to explore the effect of ME on spatial windows of visibility using the spatial contrast sensitivity function. Contrast sensitivity was determined for stationary luminance-defined sinusoidal gratings spanning a five-octave range of spatial frequencies (0.5 to 16 c/deg) in a group of 19 individuals with ME and a group of 19 matched (age, gender) controls. Compared to controls, the ME group exhibited a restricted spatial window of visibility for encoding stimulus contrast. This was characterised principally by a contrast sensitivity deficit at lower spatial frequencies and a narrower bandwidth. Our findings suggest that contrast sensitivity deficits may represent a visual marker of ME, and be indicative of abnormal visual processing at the level of the retina and in the cortical and subcortical visual pathways.
Keywords: contrast sensitivity; myalgic encephalomyelitis; chronic fatigue syndrome; spatial vision; visual psychophysics; windows of visibility contrast sensitivity; myalgic encephalomyelitis; chronic fatigue syndrome; spatial vision; visual psychophysics; windows of visibility

Myalgic encephalomyelitis (ME) is a debilitating disorder, affecting over 250,000 people in the UK [1]. It represents a substantial disease burden on sufferers, their families, the health service and economy. Marked by debilitating fatigue, it is not well understood and its diagnosis is controversial. There are a variety of case definitions for ME [2,3,4,5], though to date none have been formally operationalised. Diagnosis is based on categorising the symptoms reported by patients and differentiating them from symptoms of other fatigue-related illnesses. It is a diagnosis of exclusion, because there is currently no specific diagnostic test for ME. This is problematic due to the number of symptoms overlapping with other illnesses, and the reliance on patients to report their symptoms accurately. The result is that ME is commonly misdiagnosed, often as depression [6]. It is very important therefore that significant clinical features are investigated.
Visual symptoms in ME represent a group of distinct, quantifiable, clinical features that could significantly improve diagnosis, provide insights into underlying pathology and represent a candidate for treatment, thereby improving the everyday lives of patients. Commonly-reported visual symptoms include photosensitivity, difficulty focussing on images, blurring of images, halos around images, poor depth perception, pain in the eyes, impaired visual attention, increased susceptibility to pattern glare, and vision-related headaches [7,8,9,10,11]. A number of visual problems have also been identified objectively using experimental measures and include, reduced visual accommodation and poor binocular vision [12,13], increased susceptibility to pattern-glare [14], inaccurate eye movements [15], and impaired visual attention, particularly on tasks on which performance relies upon the ability to detect and/or identify an object whilst ignoring irrelevant visual distractors (selective attention) [16]. Visual symptoms are a pervasive part of the condition, exacerbate other symptoms, and affect the ability to carry out every day tasks [7,8,9]. Indeed, some studies report that up to 25% of those suffering from ME reduce the frequency of driving or stop driving completely due to the vision-related problems they experience [7].
In spite of reported problems related to the perception of even elementary spatial information, the effects of ME on spatial vision remain relatively unexplored and unquantified. The purpose of the present study was therefore to explore how ME affects spatial windows of visibility using the spatial contrast sensitivity function. The human contrast sensitivity function provides a measure of the range of spatial detail that is visible (resolvable) to the visual system and the relative sensitivity to stimulus contrast within this range. Changes in contrast sensitivity are well documented in ageing [17] and are evident in a range of retinal diseases [18]. They are also present in neurodegenerative diseases such as Parkinson’s disease [19] and in inflammatory autoimmune diseases such as multiple sclerosis [20,21,22]. Contrast sensitivity deficits can be present even when there is no detectable impairment in visual acuity. They provide a sensitive clinical measure of visual function and can indicate abnormal visual processing at the level of the retina and in the cortical and subcortical visual pathways.
In the present study, contrast sensitivity was determined for stationary luminance-defined sinusoidal gratings spanning a five-octave range of spatial frequencies (0.5 to 16 c/deg) in a group of ME patients and controls.

Gratings subtended six deg (horizontally & vertically) at a viewing distance of 139 cm and were generated using a Macintosh G4 and presented on a Sony Trinitron CRT monitor with an update rate of 75 Hz using the C programming language. The monitor was gamma-corrected using a spot photometer (LS-100, Konica Minolta, Tokyo, Japan) and look-up-tables (LUT). For precise control of luminance contrast the number of intensity levels available was increased from 8 to 14 bits using a Bits++ attenuator (Cambridge Research Systems, Cambridge, UK). The mean luminance of the display was ~44 cd/m2 and the monitor was the only light source. Total stimulus presentation duration was 853 ms and the luminance contrast of the sinusoidal waveform was smoothed on and off by half a cycle of a raised cosine lasting 170 ms. In a similar manner the sinusoidal waveform was spatially windowed in the horizontal dimension according to a half cycle of a raised cosine function with a half-period of 1.2 deg. This was done to minimise the presence of spatial and temporal transients.
The luminance contrast of the pattern could be varied according to the following equation:
Luminance contrast = (Lmax − Lmin)/(Lmax + Lmin),
where Lmax and Lmin are the maximum and the minimum luminances of the grating, in the range 0–1.

Contrast threshold measurements were taken across a five-octave range of spatial frequencies (0.5 to 16 c/deg) using a single-interval, forced-choice procedure. On each trial, participants were presented with a fixation cross, followed by the presentation of the grating, upon which they were required to judge its orientation (vertical or horizontal). Participants were allowed a short practice run and the testing was performed in the dark. The luminance contrast of the test stimulus was varied from trial to trial according to a modified three-down, one-up staircase designed to converge on the contrast corresponding to 79.4% correct [24,25]. At the beginning of each run of trials the contrast of the test pattern was initially set to a suprathreshold level (typically ~6 dB above threshold) and the initial staircase step size was chosen to be half this value. On subsequent reversals the step size was halved and testing was terminated after a total of 16 reversals. Threshold estimates were taken as the mean of the last 4 reversals in each staircase. Each observer completed two staircases per condition and a mean was taken. The order of testing was randomised. Contrast thresholds were converted to contrast sensitivity (1/contrast threshold).

This work was funded by Fight for Sight and The Thomas Pocklington Trust. We are grateful to all who took part in our study, particularly those with ME.

The authors report no conflicts of interest. The funding sponsors had no role in the design of the study; in the collection, analyses, or interpretation of data; in the writing of the manuscript, and in the decision to publish the results. 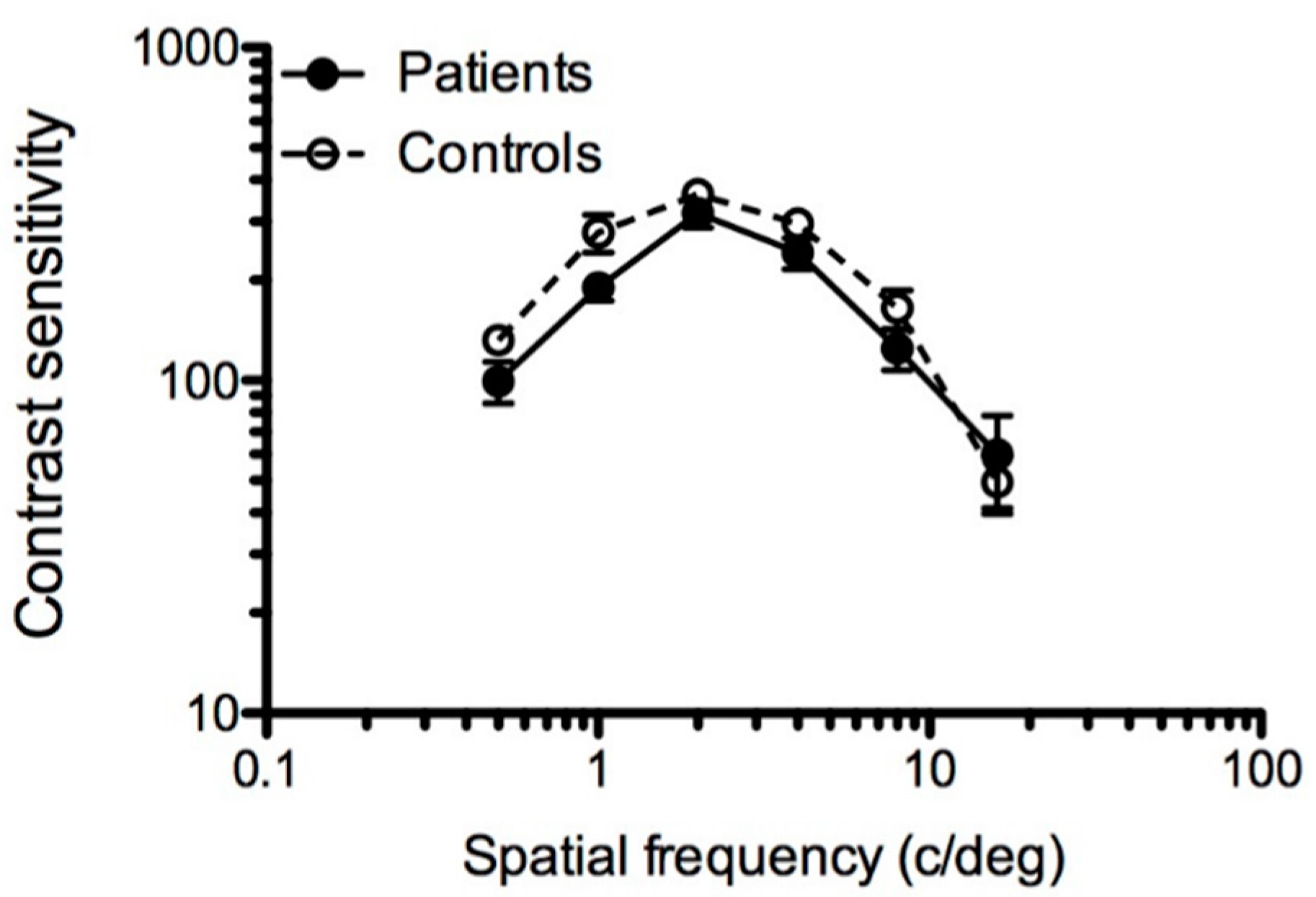