Liver is an essential organ that carries out multiple functions such as glycogen storage, the synthesis of plasma proteins, and the detoxification of xenobiotics. Hepatocytes are the parenchyma that sustain almost all the functions supported by this organ. Hepatocytes and non-parenchymal cells respond to the mechanical alterations that occur in the extracellular matrix (ECM) caused by organogenesis and regenerating processes. Rearrangements of the ECM modify the composition and mechanical properties that result in specific dedifferentiation programs inside the hepatic cells. Quiescent hepatocytes are embedded in the soft ECM, which contains an important concentration of fibrillar collagens in combination with a basement membrane-associated matrix (BM). This work aims to evaluate the role of fibrillar collagens and BM on actin cytoskeleton organization and the function of rat primary hepatocytes cultured on soft elastic polyacrylamide hydrogels (PAA HGs). We used rat tail collagen type I and Matrigel® as references of fibrillar collagens and BM respectively and mixed different percentages of collagen type I in combination with BM. We also used peptides obtained from decellularized liver matrices (dECM). Remarkably, hepatocytes showed a poor adhesion in the absence of collagen on soft PAA HGs. We demonstrated that collagen type I inhibited apoptosis and activated extracellular signal-regulated kinases 1/2 (ERK1/2) in primary hepatocytes cultured on soft hydrogels. Epidermal growth factor (EGF) was not able to rescue cell viability in conjugated BM but affected cell aggregation in soft PAA HGs conjugated with combinations of different proportions of collagen and BM. Interestingly, actin cytoskeleton was localized and preserved close to plasma membrane (cortical actin) and proximal to intercellular ducts (canaliculi-like structures) in soft conditions; however, albumin protein expression was not preserved, even though primary hepatocytes did not remodel their actin cytoskeleton significantly in soft conditions. This investigation highlights the important role of fibrillar collagens on soft hydrogels for the maintenance of survival and aggregation of the hepatocytes. Data suggest evaluating the conditions that allow the establishment of optimal biomimetic environments for physiology and cell biology studies, where the phenotype of primary cells may be preserved for longer periods of time. View Full-Text
Keywords: primary hepatocytes; polyacrylamide hydrogels; stiffness; collagen; basement membrane; actin cytoskeleton; epidermal growth factor (EGF) primary hepatocytes; polyacrylamide hydrogels; stiffness; collagen; basement membrane; actin cytoskeleton; epidermal growth factor (EGF)
►▼ Show Figures 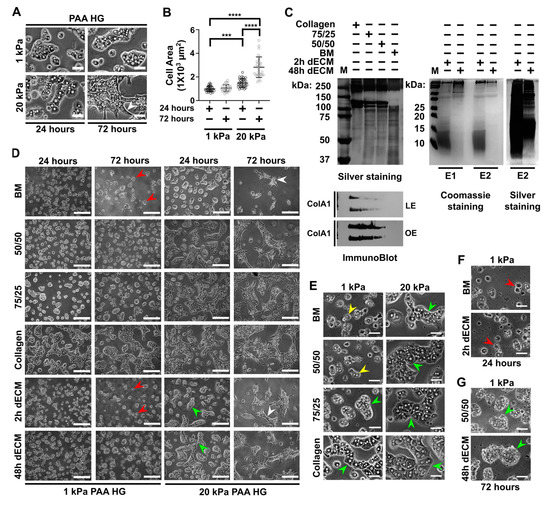