Reproductive Disorders and Leptospirosis: A Case Study in a Mixed-Species Farm (Cattle and Swine)
Next Article in Special Issue

Household Behavior with Respect to Meat Consumption: Differences between Households with and without Children. Vet. Sci. 2017, 4, 53
Previous Article in Journal / Special Issue

Development of a Dog-Assisted Activity Program in an Elementary Classroom

Polymorphism Analysis of Ch1 and Ch2 Genes in the Siberian Cat

Cats are usually spreaders of allergens that are critical for sensitive people; the Siberian cat is a breed supposed to be low level allergenic, according to some breeders’ statements. The sequence of the two genes, namely Ch1 and Ch2, that code for the allergen Fel d 1, the major allergen responsible for outbreaks of allergy symptoms, is not yet known in the Siberian cat, and finding this was the aim of our investigation. Notably, our work is the first survey of the genetic structure of these genes in Siberian cats. The comparison of the sequences of Siberian cats, non-Siberian cats, and sequences present in the National Center for Biotechnology Information database revealed a considerable number of mutations; some of those detected in the Siberian cat, due to their position in exon regions, could affect the Fel d 1 allergenic properties. Therefore, further investigations are recommended to assess if the identified mutations can be responsible for a reduced-allergen synthesis and can be used as markers for selection of low level allergenic cats.
Keywords: Fel d 1; Siberian cat; Ch1 gene; Ch2 gene; genetic selection; low-allergenic cat Fel d 1; Siberian cat; Ch1 gene; Ch2 gene; genetic selection; low-allergenic cat

Cats (Felis catus) are quite diffused domestic animals, admired for their beauty and their wayward temperament; unfortunately, they are also spreaders of allergens that are critical for allergic people, and in some extreme and dramatic cases the owners are sadly forced to remove the cat from their house to avoid health problems. These allergens have the potential to elicit the outbreak of symptoms with different degrees of severity: they can range from ordinary discomforts like rhinitis and conjunctivitis to potentially life-threatening asthmatic crisis [1,2,3]. In this regard, the selection of low allergenic cats could be a new possibility for allergic people who wish to keep in their home their favorite pet. Fel d 1, the major allergen produced by cats, is a tetrameric protein of 35–40 kDa, constituted of two heterodimer of 18–20 kDa [4,5,6]. Each subunit comprises two polypeptide chains, chain 1 and chain 2, encoded by two separated genes, namely Ch1 and Ch2. Fel d 1 is a secretoglobulin primarily produced in sebaceous, anal, and salivary glands and is present on the animal skin and pelt as a consequence of the grooming [7,8,9]. Although allergic patients react with a wide number of proteins found in cat pelts [10,11], Fel d 1 is the most prominent allergen, and the clinical accuracy of this finding was confirmed by investigations that detected the Fel d 1-specific IgE in the serum of about 80% of cat-allergic patients [10,11,12]. It is worth noticing that houses with cats have often airborne levels of Fel d 1, which is more than enough to provoke an asthma crisis in highly sensitive inhabitants [13,14]. In a previous survey [15], the existence of hypoallergenic cats due to a lower production of Fel d 1 protein was stated; thus, the aim of this investigation was to analyze the sequences of the two genes (Ch1 and Ch2) encoding Fel d 1 protein in some Siberian cats, a supposed low level-allergenic breed accordingly to some breeders statement. Notably, our work is the first survey of the genetic structure of these genes in Siberian cats to identify molecular differences between Siberian and non-Siberian cats.

Blood samples were collected from 39 cats, namely 4 Siberian and 35 non-Siberian. Three Siberian cats were previously tested for the Fel d 1 concentration in saliva (private lab, Charlottesville, VA, USA), resulting in 2.19, 1.66, and 0.48 µg/mL. DNA was extracted with NucleoSpin Blood Quick Pure Kit (Macherey-Nagel GmbH, Duren, Germany), and Ch1 and Ch2 genes were amplified by PCR with a 2720 AB Thermal Cycler Device following a protocol suggested by the literature [16]. The primers sequences were as follows:
The amplicons from four Siberian and five non-Siberian cats were analysed by the NGS (Next Generation Sequencing) technique with the use of the Miseq system (Illumina, CA, USA). The Variant Calling for each sample was performed using the Miseq Reporter software tool (Illumina, CA, USA). Mutation points in Siberian and Short-Haired cats amplicons were compared with National Center for Biotechnology Information (NCBI, [17]) sequences X62477 (Felis catus gene for Fel d 1 protein chain 1) and X62478 (Felis catus gene for Fel d 1 protein chain 2). The graphic representation of the mutation points identified was realized in NCBI Genome Workbench tool.

Cats are spreaders of allergens and the consequences of this characteristic for allergic people can be serious; in the cases of rhinitis and conjunctivitis, the cohabitation arrangement needs to be adjusted, e.g., by ventilating and cleaning rooms and clothes properly and constantly, while having asthma clearly makes it impossible to own a cat [18,19]. Despite the small number of samples, namely 4, and given the fact that subjects of this breed are very rare primarily because of the scarcity of breeding farms and their high cost, in Siberian cats we detected a considerable number of mutations in Ch1 and Ch2, the two genes encoding for Fel d 1 allergen. Some of these mutations, due to their position in exon regions, may play a key role in the allergenic properties of the Fel d 1 protein.
In Ch1, one Siberian cat shows a missense mutation; namely, in the signal sequence an Alanine hydrophobic residue is replaced by a polar one of Serine that could modify the internalization into endoplasmic reticulum and modify the glycosylation pattern. In Ch2, the same Siberian cat shows one mutation in exon 3, namely a missense mutation that replaces a potential N-glycosylation site of Asparagine with a new O-glycosylation site of Serine. If the absence of 2 Serine residues in close proximity is also taken into account, these mutations could change the structure of the mature glycoprotein and thus its allergenic properties; the low concentration of Fel d 1 in the saliva of this subject could be related to the low production of the intact allergenic molecule. The number of Siberian cats showing this molecular variant must be well established, as well as the level of Fel d 1 in Siberian cats with different variants.
The remaining mutations are positioned in introns and their role is still a matter of investigation.

Further analyses are recommended to assess if the identified mutations are responsible for a reduced allergen synthesis and then if they can be used as markers for selection of low-level allergenic cats. In the case of positive confirmation, the relevance of this finding would consist in also giving sensitive people the possibility of going beyond their allergy and finally owning a cat in their home.

P.S. and A.T. contributed to conception and design of the project. S.S., D.S., A.B., S.M., and E.L. contributed to acquisition, analysis, and interpretation of data. P.S., R.R., S.S., and D.S. participated in drafting the article. All the authors gave final approval of the version to be submitted. 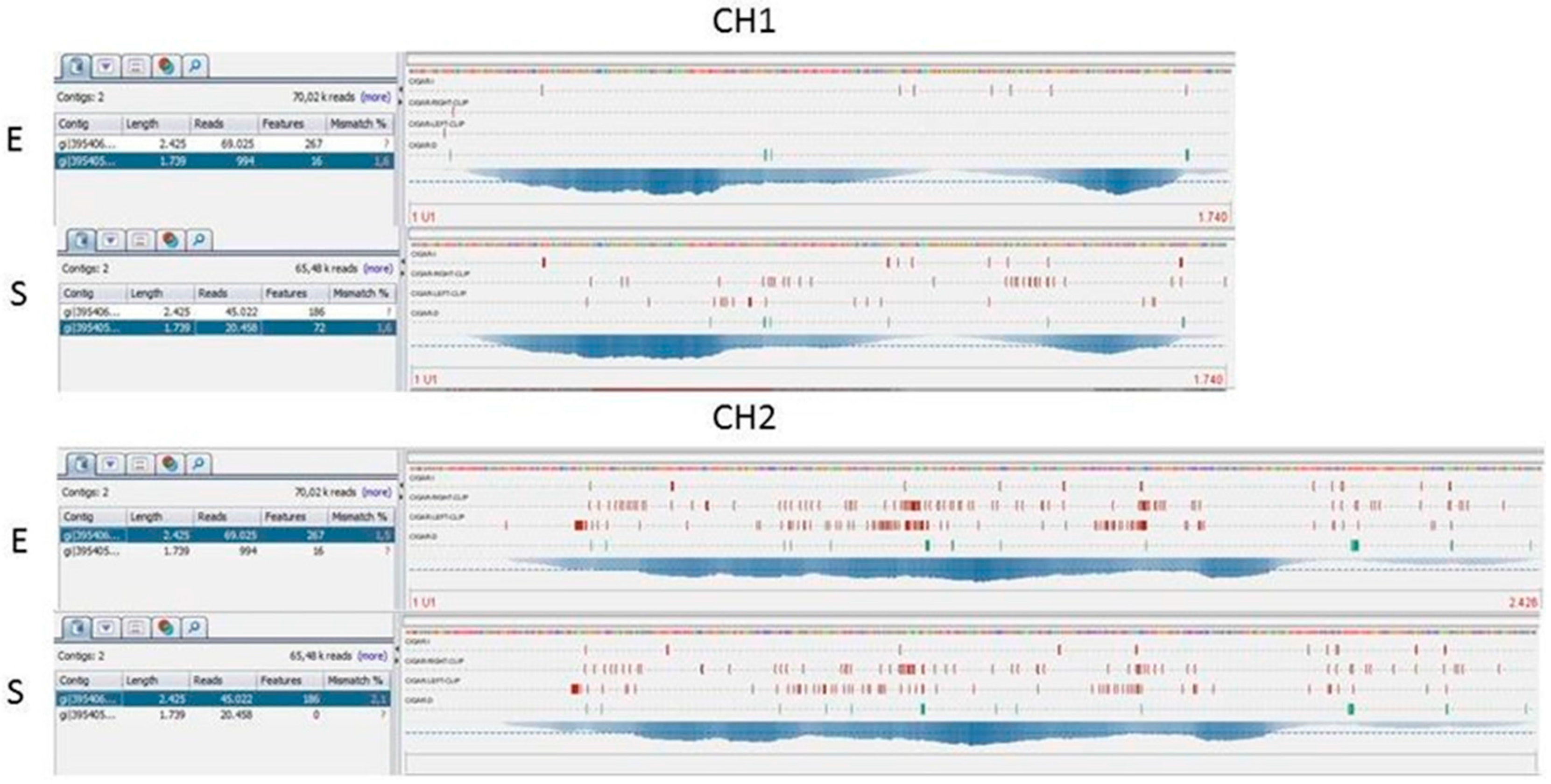