Reproductive Disorders and Leptospirosis: A Case Study in a Mixed-Species Farm (Cattle and Swine)
Previous Article in Journal

The search in the EU Rapid Alert System for Food and Feed database (https://webgate.ec.europa.eu/rasff-window/portal/?event=searchForm&cleanSearch=1) [35] retrieved the data used for this research (accessed on 1 September 2017). The following criteria were used in the search undertaken for subject “norovirus” (from 1979 till 31 August 2017): food, notifying country, country of origin, food product category, year of notifications, and also month of notification, type of notification, classification basis, risk decision, distribution, etc. All data were extracted in Excel files in the various combinations chosen. In addition, data were retrieved on alert notifications for other hazards (“Salmonella” and “Listeria”) within the “pathogenic microorganisms” food product category, for comparative purposes. In the context of this paper, only alert and border rejection notifications will be examined.

3.1. Alert and Border Rejection Notifications in Food with “Norovirus” Submitted until 31 August 2017 in Bivalve Molluscs

3.2. Alert and Border Rejection Notifications in Food with “Norovirus” Submitted until 31 August 2017 in Fruits and Vegetables

The 46 alert notifications reported in the EU RASFF database that involved “norovirus” in fruits and vegetables (Table 1) were most frequently notified by two EU RASFF member countries, namely, Denmark (n = 17) and France (n = 10). In addition, Finland (n = 4), Sweden (n = 4), the Czech Republic (n = 3), the Netherlands (n = 3), Belgium (n = 2), Germany (n = 2), and the United Kingdom (n = 1) contributed such notifications. Raspberries (n = 31) was the fruit most often cited while strawberries (n = 5), blueberries (n = 2), blackberries (n = 1), lingonberries (n = 1), forest fruit mix (n = 1) as well as lettuce (n = 2), were also cited. Additionally, three alert notifications cited tomatoes (e.g., cherry tomatoes, cocktail tomatoes and dried tomatoes in sunflower oil) for “norovirus” presence and were all notified by the same member country, namely the Czech Republic in 2017. Serbia (n = 17) and Poland (n = 14) were the countries most often cited as the countries of origin in such notifications with others being much less frequently cited such as China (n = 3), Chile (n = 3), Ukraine (n = 2), Morocco (n = 2), etc.
The five border rejection notifications reported in the EU RASFF that involved “norovirus” in fruits and vegetables involved strawberries (n = 3), blackberries (n = 1) and raspberries (n = 1). The notifying countries were Denmark (n = 2) and Hungary, Lithuania and Finland (n = 1 each), whereas the Third Countries cited as the countries of origin were China (n = 3) and Serbia (n = 2).

3.3. Alert Notifications in Food with “Norovirus” Submitted until 31 August 2017 by the EU RASFF Member Countries as Notifying Countries and as Countries of Origin

3.4. Temporal (Monthly and Yearly) Distribution of Alert and Border Rejection Notifications in Food with “Norovirus” Submitted until 31 August 2017 in the EU RASFF

3.5. “Countries/Organizations Involved” in Alert and Border Rejection Notifications and “Distribution Status” in Food with “Norovirus” Submitted until 31 August 2017 in the EU RASFF

In the EU RASFF database, the number of countries/organizations involved in each notification varied significantly in alert and border rejection (Table 2). More specifically, alert notifications that involved ≥10 countries (namely 19, 16, 12, 11 and 10 countries) were cited once, once, once, three and two times, respectively.
The “distribution status” indicates knowledge existing at the time of notification about the possible distribution of the product on the market. The concept “market” is to be interpreted in a geographical way: “the European Economic Area (EEA) market”, i.e., this does not necessarily mean that the product is already on the shelves available to consumers, as often it is not.
The most frequently cited “distribution status” of food contaminated with “norovirus” in alert notifications in both bivalve molluscs and fruits and vegetables was reported as following: “distribution to other member countries” (n = 42), “distribution on the market (possible)” (n = 26), “distribution restricted to notifying country” (n = 12), and “no distribution from notifying country” (n = 10).
As regards border rejection notifications, the most frequently mentioned “distribution status” of “norovirus”-contaminated food (both bivalve molluscs and fruits and vegetables) was “product not (yet) placed on the market” (n = 37), “no distribution” (n = 4) and “product allowed to travel to destination under customs seals” (n = 1).

3.6. Risk Decision Categorization of Alert and Border Rejection Notifications in Food with “Norovirus” Submitted until 31 August 2017 in the EU RASFF

3.8. Genogroups Identified in Alert and Border Rejection Notifications in Food with “Norovirus” Submitted until 31 August 2017 in the EU RASFF and State of Food Reported in the RASFF Database

Food safety within the EU is a shared responsibility for all EU RASFF members acting as protectors of one another. The practical approach towards the shared protection capacity realization of all RASFF member countries is to respond to the specific threats in the specific foods that reach each one of them so that, at the end (provided that all members play their respective role efficiently), the entire European population is safe. This axiom is very well portrayed in the long-standing EU RASFF institution’s history of “norovirus”-related alert and border notifications. Through far-reaching, in-depth analyses of the EU RASFF database, emerging risks can be identified, changing trends in established foodborne infections can be closely monitored, and, ultimately, public health can be safeguarded against foodborne infections more efficiently (as is the case of “nororivus”), and could provide the information (of potential avail) to interested parties for future risk analysis efforts on “norovirus”. The international transmission potential of noroviruses is enhanced already by the ever growing human population, the international travel and the increasing globalization in food distribution [42]. This new era for “norovirus” will have to be resolved with the “one health” approach, where human and veterinary medicine collaborate to offer the desired high level of health protection to the world’s consumers. 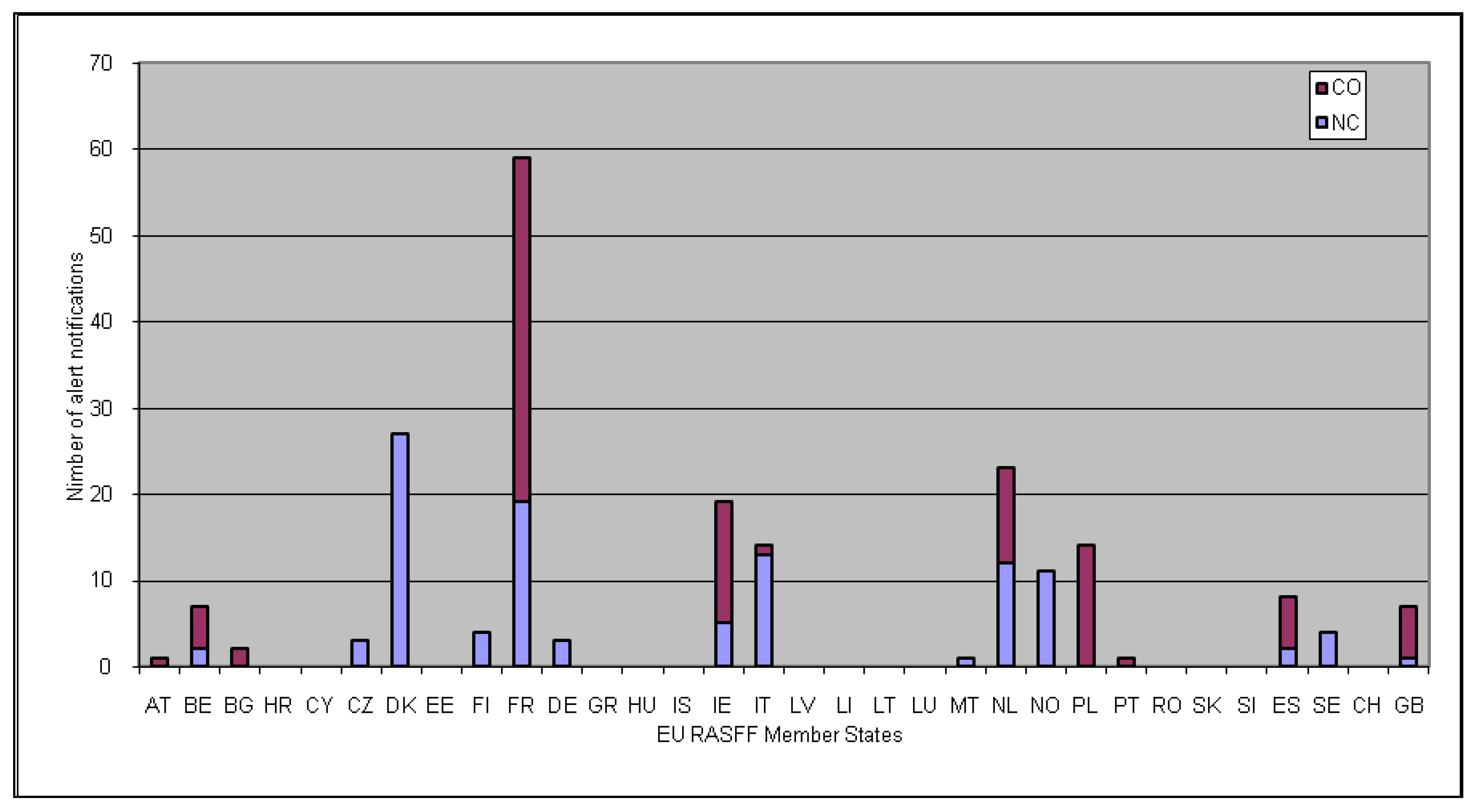