A retrospective survey was performed on the presenting conditions of 205 live grey seal pups (Halichoerus grypus) admitted to the Cornish Seal Sanctuary in Gweek, United Kingdom between May 2005 and March 2011. The purpose of the survey was to examine the prevalence of various presenting signs at the sanctuary. The presenting signs were classified into nine non-mutually exclusive categories: ocular disorders, nasal disorders, oral disorders, respiratory disorders, orthopaedic disorders, puncture wounds, abrasions, netting injuries, and onychia. The sex ratio of seal pups in this study was 1.35 males per female. Of the 205 examined for rehabilitation, 22 (10.73%) did not survive to release. 68.78% of grey seal pups presented with puncture wounds, 47.80% with respiratory disorders, 46.34% with ocular disorders, 42.63% malnourished, 36.59% with abrasions, 25.37% with oral disorders, 23.90% with nasal disorders, 11.71% with orthopaedic disorders, 9.27% with onychia, and 3.41% presented with netting injuries. 52% were normothermic, 42% were hyperthermic, and 5% were hypothermic. Associations between gender, outcome of rehabilitation, hospitalisation time and presenting disorders were examined. In addition, admissions rates were found to display seasonality. The results of this study will aid in future preparation of grey seal rehabilitation facilities.
Keywords: wildlife; pinniped; rehabilitation; epidemiology wildlife; pinniped; rehabilitation; epidemiology

Grey seals (Halichoerus grypus) are common among the shores of United Kingdom (UK) and frequently rehabilitated. The most recent estimate for the total grey seal UK population is between 90,600 and 142,900 [1].
Barnett et al. [2] first reported presenting conditions of grey seal pups in UK rehabilitation centres, using data dating from 1992 until 1998. Since that time, a major European outbreak of phocine distemper virus has affected the UK seal population [3,4]. Additionally, climate change and other anthropogenic activities have been implicated in changes to disease patterns of marine mammals [5,6] and other wildlife [7]. With continual changes in disease patterns, it is important for the UK to maintain a well-stocked and informed stranding network for seals. To achieve this goal, rehabilitation centres must be kept aware of expected diseases and conditions. The main purpose of this study was to examine the current prevalence of presenting signs in grey seal pups.

Records were examined from all juvenile grey seals which were admitted to the Cornish Seal Sanctuary in Gweek, UK from May 2005 until March 2011. Seals were rescued from along the south-west English coast by trained personnel. Some, but not all, seals were given oral rehydration fluids during rescue depending on the assessment and capability of the rescuer. Following a 30 min resting period post-transport, each seal was given a systematic physical examination upon admission to the sanctuary. The examination was performed by a trained animal handler or veterinary surgeon, and the findings were documented. Body condition score (BCS) was subjectively ranked as good, fair or poor.

Admission records were entered into an Excel® [8] database format. Age estimation was replaced with age classification based on lanugo coat pattern and umbilicus status as described by Barnett et al. [2]: neonate (lanugo coat present, umbilicus present), white-Coat (lanugo coat present, umbilicus not present), mid-moult (lanugo coat partially shed), and moulted (lanugo coat completely shed). Based on wild studies of grey seal pups, neonates are assumed to be younger than five days old, white-coats between five and 14 days old, mid-moult from 16 until 21 days, and pups are moulted from 11 days until 10 months old [9,10]. Temperature was classified as marked hypothermic, mildly hypothermic, normal, mildly hyperthermic, and marked hyperthermic based off reported normal values for grey seals [11]. The presenting signs were classified into nine non-mutually exclusive categories: ocular disorders, oral disorders, nasal disorders, respiratory disorders, orthopaedic disorders, puncture wounds, abrasions, netting injuries, and onychia. Trauma was separated into four categories based on type of wound and anatomical involvement: orthopaedic, puncture, abrasion and wounds caused by nets. Due to the inability to perform extensive radiographic investigation, any injuries that grossly included a bone or any obvious fractured bones were classified as an orthopaedic disorder. Superficial dermal wounds were classified as abrasions. Onychia included any inflammation around the nail. A seal was classified as malnourished if it had a poor BCS. Nasal disorders included nasal discharge. A respiratory disorder was indicated if there was marked effort in respiration or production of respiratory noise. Any lesion in the mouth was classified as an oral lesion.
There were two outcomes of rehabilitation. Either the seal was released or the seal did not survive to release. Any deaths that occurred after release were not considered due to the inability to secure accurate survival reports. Any humane euthanasia of seals at the centre was performed by injecting a lethal dose of pentobarbital intravenously. Hospitalisation time was calculated in days starting from day of admission until day of release or death.
To examine if hospitalisation admission displayed seasonality, a cosinor test was performed using R [12] as described by Barnett and Dobson [13]. For all other statistical calculations, Minitab® version 16 [14] was used. Prevalence with 95% confidence intervals was calculated based on a binary examination of the classification disorders. To examine if age or gender were risk factors for the presenting conditions, univariable binary logistic regression analyses were performed. A similar analysis was also performed on outcome with presenting conditions and other variables. Variables with associations of p < 0.25 were placed into a multivariable binary logistic regression model, and the least significant variable excluded until a final statistically significant model was obtained.

Between May 2005 and March 2011, a total of 205 grey seal pups were admitted for rehabilitation at the Cornish Seal Sanctuary (Table 1). BCS was reported in 190 pups. Only 22 pups did not survive until release. Of those 22, only one was euthanized. The seal pup was euthanized after 4.5 months due to worsening neurological signs and poor prognosis. Due to the low number neonates (n = 11), neonates and white-coat were combined for statistical analysis.

The prevalence of each presenting disorder with 95% confidence intervals is shown on Figure 1. The most common presenting condition was trauma. 81.95% of seal pups had at least one form of trauma. 68.78% of seal pups had puncture wounds while 36.59% had abrasions. 11.71% had obvious orthopaedic disorders, and 3.41% has netting injuries. After trauma, respiratory disorders were the second most common presenting sign (47.80%). Ocular disorders (46.34%), malnourishment (42.63%), and oral lesions (25.37%) were also significantly present in this population. Onychia (9.27%) and netting injuries were the least common presenting conditions. 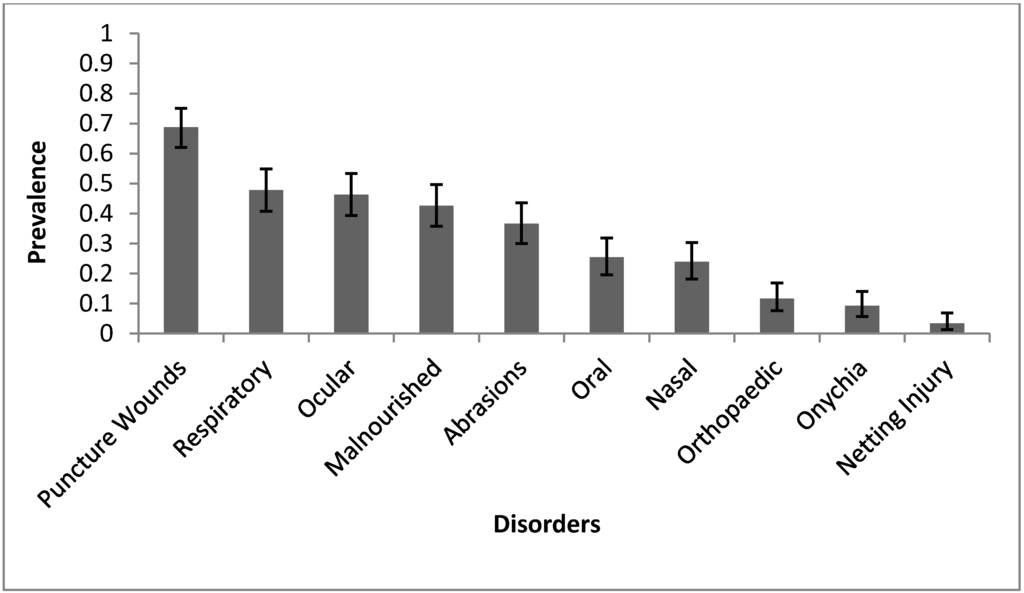 The significant univariable binary logistic regressions (Table 2) demonstrate that gender is associated with some of the presenting disorders. Females are significantly less likely to have oral disorders and abrasions. In addition, there is a trend of females being half as likely to present with respiratory disorders as males.

Age was significantly associated with four presenting disorders (Table 2). Younger pups were less likely to have respiratory signs while white-coat pups were significantly less likely to present with nasal disorders, oral disorders and puncture wounds. Seven moulted pups present with netting injuries while no non-moulted pup (neonate, white-coat, and mid-moult) had these injuries. A fisher exact test showed a trend towards an association of age and netting injuries (p = 0.097).

Temperature was recorded on all individuals except three (Table 3). The majority of pups were normothermic. However, almost 42% of pups displayed one form of hyperthermia, while only 5% of pups presented as hypothermic.

Of the 205 seals admitted for rehabilitation, 22 did not survive to release. Univariate binomial logistic regression of different variables recorded found a significant association with hospitalisation time only. The relative odds for a pup surviving until release increased by 1.06 (95% CI: 1.04–1.09, p < 0.001) per day during its stay in rehabilitation. A survival plot (Figure 3) demonstrates that the likelihood of a seal surviving decreased by a significant amount early in rehabilitation. There were no statistically significant associations between presenting condition and whether or not the seal was released. 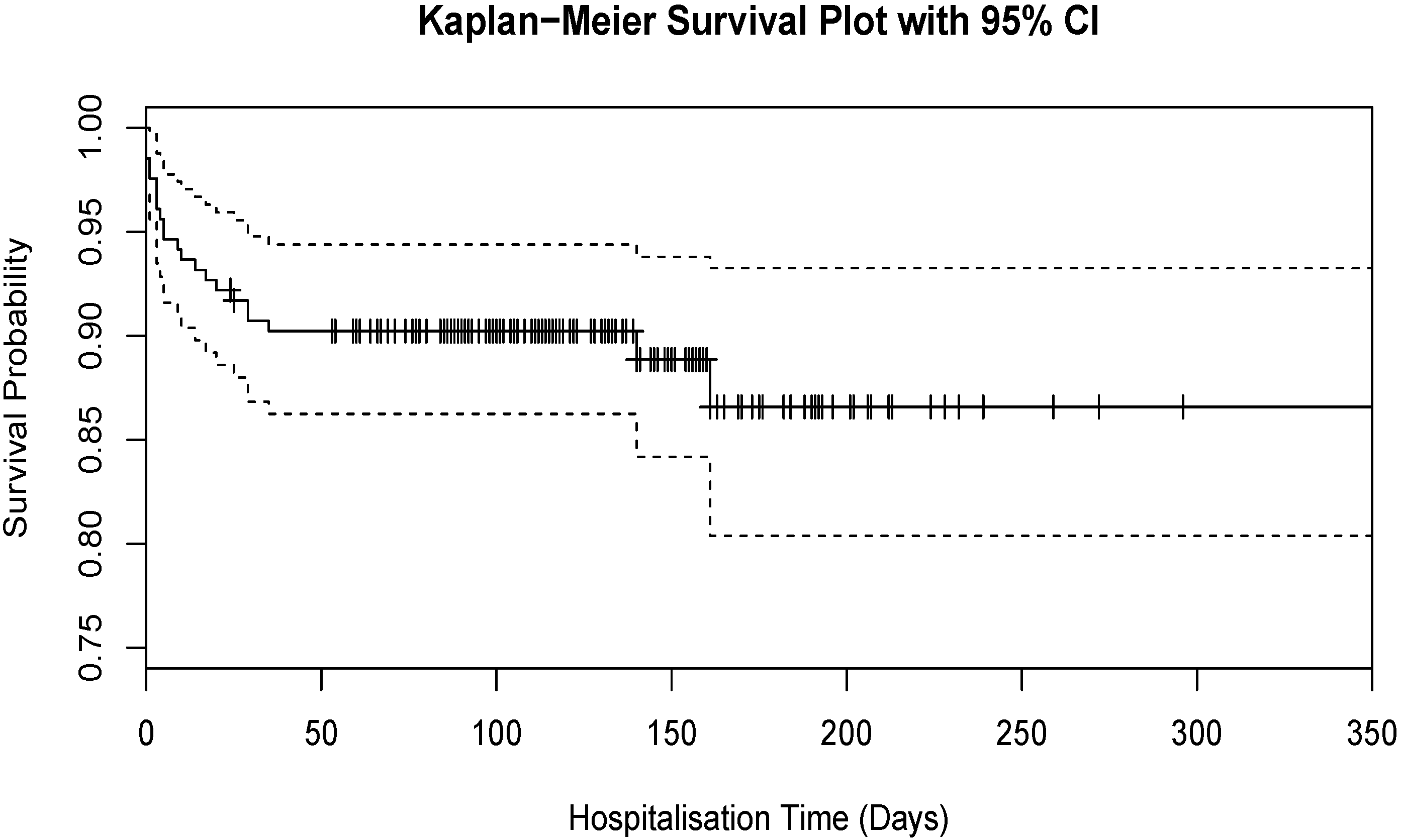 Multivariable binary logistic regression analyses could not produce a significant model for any presenting disorder before being reduced to a univariable model. In addition, the multivariable model of outcome did not converge. The low number of seals that did not survive is most likely the cause of the non-convergence. When hospitalisation time was removed, the model did converge insignificantly. Further reductions to the model continued to produce non-significant models until all variables had been removed.

The rehabilitation of grey seals will continue in the UK in the foreseeable future. The stranding network for seals must maintain a well-equipped and informed system. With climate change, diseases in wild populations are expected to change [5,6,7]. This study presents an updated prevalence of presenting conditions of seal pups admitted to rehabilitation. Continued assessment of disease prevalence and presenting conditions on admission will allow rescuers to prepare for the continued rehabilitation of grey seals.

The authors would like to thank Darren Shaw and Ian Handel for their assistance with the statistical methods and Amanda Stansbury for proofreading the manuscript. This study was performed as part of the Student Selected Component 2 from the Royal (Dick) School of Veterinary Studies’ curriculum.