Food safety is one of the main concerns in the world and in wine it depends mostly on metabolites of microbial origin. The aim of this study was to investigate the occurrence of natural contaminants, ochratoxin A and biogenic amines (cadaverine, histamine, putrescine and tyramine), in Croatian commercial red wines originating from different Croatian wine-making regions. Ochratoxin A was detected in 92.8% of samples, however its concentrations in all samples were more than 10-fold lower than the limit set by the European Union (2 µg/kg), marking these wines as safe for consumption. The frequency of occurrence and measured concentrations of ochratoxin A were higher in wines produced in southern regions with highest values obtained in wines from southern Dalmatian islands. All samples were contaminated with cadaverine and putrescine, while 88.2% and 82.7% were contaminated with histamine and tyramine, respectively. Histamine concentrations ranged from below the limit of detection to 8.5 mg/L. Higher histamine concentrations were measured in wines with higher pH values which coincided with southern geographic origin. These results reinforce the need for routine detection and quantification of biogenic amines in Croatian wines to achieve better control of vinification and minimize their formation. View Full-Text
Keywords: Croatian red wines; HPLC; ochratoxin A; biogenic amines Croatian red wines; HPLC; ochratoxin A; biogenic amines
►▼ Show Figures 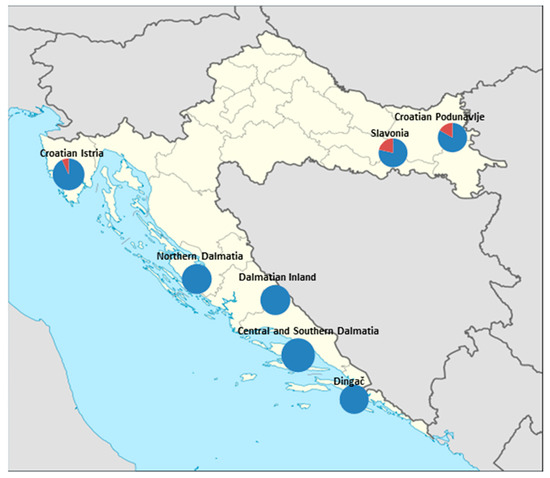